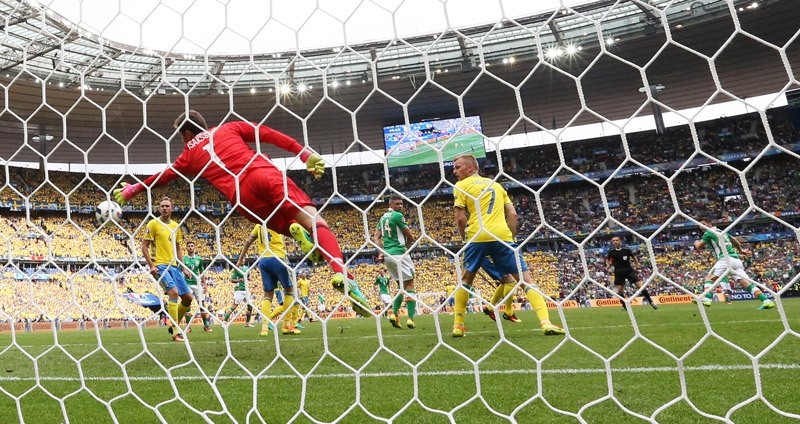 Zlatan Ibrahimovic rescued Sweden yet again in a 1-1 draw with Ireland on Monday, even though he couldn't set a European Championship scoring record.

Sweden trailed until the 71st minute, when Ibrahimovic created the equalizer. Gliding forward, the Sweden captain sent the ball across the goalmouth and Ireland defender Ciaran Clark stooped to head it into his own net.

Ireland has taken a deserved lead in the 48th minute with Wes Hoolahan scored from a sweetly struck half-volley from inside the area.

In a group where Belgium and Italy are favored, a point for each team leaves their Euro 2016 prospects uncertain.

Ireland created more chances Monday and midfielder Jeff Hendrick went close with a series of shots, including one that hit the crossbar in the 32nd.

Ibrahimovic hooked shots wide in each half as he tried to become the first player to score in four different European Championships.

The 34-year-old Swede was far from his best but his yellow-shirted teammates still raced to celebrate with him after the goal.

Tiny in stature compared Ibrahimovic, Hoolahan threatened to eclipse the star attraction. The 5-foot-6 midfielder showed fine technique to control a first-time shot from a chipped cross by right back Seamus Coleman, who went on a twisting dribble deep into the Sweden penalty area.

Until then, Ireland had followed an early trend at Euro 2016 of teams failing to turn dominance into goals.

Hendrick and his teammates exploited space driving from their left flank at Sweden's defense, and an added threat was supplied by left back Robbie Brady's precise deliveries.