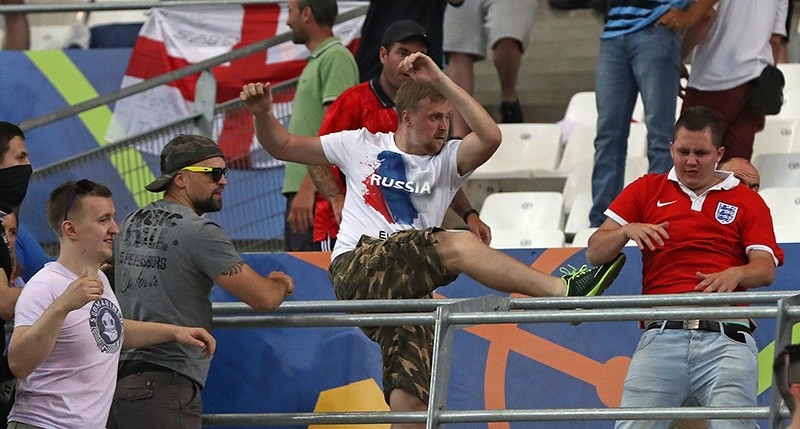 UEFA on Tuesday told Russia it would be kicked out of the European Championship if its fans cause one more incident of stadium trouble during the tournament.

Europe's governing body declared Russia responsible for the stadium disturbances, racist chanting and fireworks thrown during the Russia-England game in Marseille on Saturday.

"This disqualification is suspended until the end of the tournament," said the UEFA disciplinary commission decision.

"Such suspension will be lifted if incidents of a similar nature (crowd disturbances) happen inside the stadium at any of the remaining matches of the Russian team during the tournament," it added.

UEFA stressed that its order only applied to trouble inside stadiums where the governing body is responsible for security.

Russia are playing Slovakia in Lille on Wednesday, sparking fears its fans will come into contact with English fans whose team is playing Wales in nearby Lens on Thursday.

After the 1-1 draw in Marseille, Masked Russian fans crossed security barriers inside the Stade Velodrome and attacked England fans. Dozens of English supporters, including women and children, had to flee across security barriers to escape.

Russia's fans were also involved in violent clashes with England supporters in the port city before and after the match.

UEFA had already warned Russia and England that it could disqualify them if there was more trouble. But only Russia was charged over the conduct of its fans.

French Prime Minister Manuel Valls said on Tuesday that some football fans will be deported from France after violent clashes marred the start of the Euro 2016 tournament, and a group of Russia fans was detained near Cannes on the French Riviera.

A group of Russian football supporters was being thrown out of France on Tuesday because authorities fear they will cause trouble at Euro 2016 matches, officials said.

French officials were checking the identities of 29 supporters at a hotel in Mandelieu-La Napoule near Marseille and authorities have already decided to take some of them to a holding center at the border, local authorities told AFP.

French police are trying to establish if any of the Russians are on a list of supporters "considered a risk", said Francois-Xavier Lauch, a top local official in the Alpes-Maritimes area.

It is believed the Russian supporters intended to travel to the northern city of Lille, where Russia play Slovakia on Wednesday.

The checks come after the English Football Association expressed concern that France was not doing enough to crack down on Russian hooligans following the mass fighting between English and Russian supporters in Marseille on Saturday.

Authorities are concerned that Russian and English fans will come into contact again in Lille, because England play Wales in nearby Lens on Thursday.

But English Football Association chief Greg Dyke rejected the suggestion that England fans were at fault for the incidents in the stadium and said he had "serious concerns" about security in Lille.

"We have serious concerns around the security arrangements for the city (Lille) in the next few days," Dyke said in a letter to UEFA.

He called for an urgent meeting of the Lille and Lens police authorities to draw up an "effective" security plan.

Dyke said security in the Marseille stadium on Saturday had been "unacceptable" and protested to UEFA that a distinction should be drawn between the two sets of fans as only Russia have been charged over their conduct.

"Supporters were able to get in with fireworks and flares, and then let them off, and there was insufficient segregation between the Russian and English fans," Dyke said.

England captain Wayne Rooney and coach Roy Hodgson have already made a video plea for the country's fans to avoid fighting in Lille.

"I'm appealing to you to stay out of trouble," Hodgson said. "We really desperately want to stay in the competition."

The Russian Football Union said its top officials will meet with supporters in France on Tuesday to urge them not to cause violence in Lille.

They will tell the fans there is a "categorical intolerance of all types of violations".

"Hooligan stunts, racism, as well as all sorts of discrimination must be eradicated," the Union said on its website.

On Monday, 10 men -- six Britons, three French and one Austrian -- were found guilty of violence around the England-Russia match and given jail terms. Most were tried for throwing bottles at police.

"We know that troublemakers targeted England fans in an orchestrated way inflicting serious injuries," he said in a statement.

One British man in his fifties is still in a serious but stable condition in hospital after being attacked with an iron bar.

The fan violence has overshadowed the start of the month-long tournament. The build-up was already overshadowed by fears of a terrorist attack.

On Tuesday, tens of thousands of protesters were set to rally across the country to demonstrate against the government's labor market reforms.