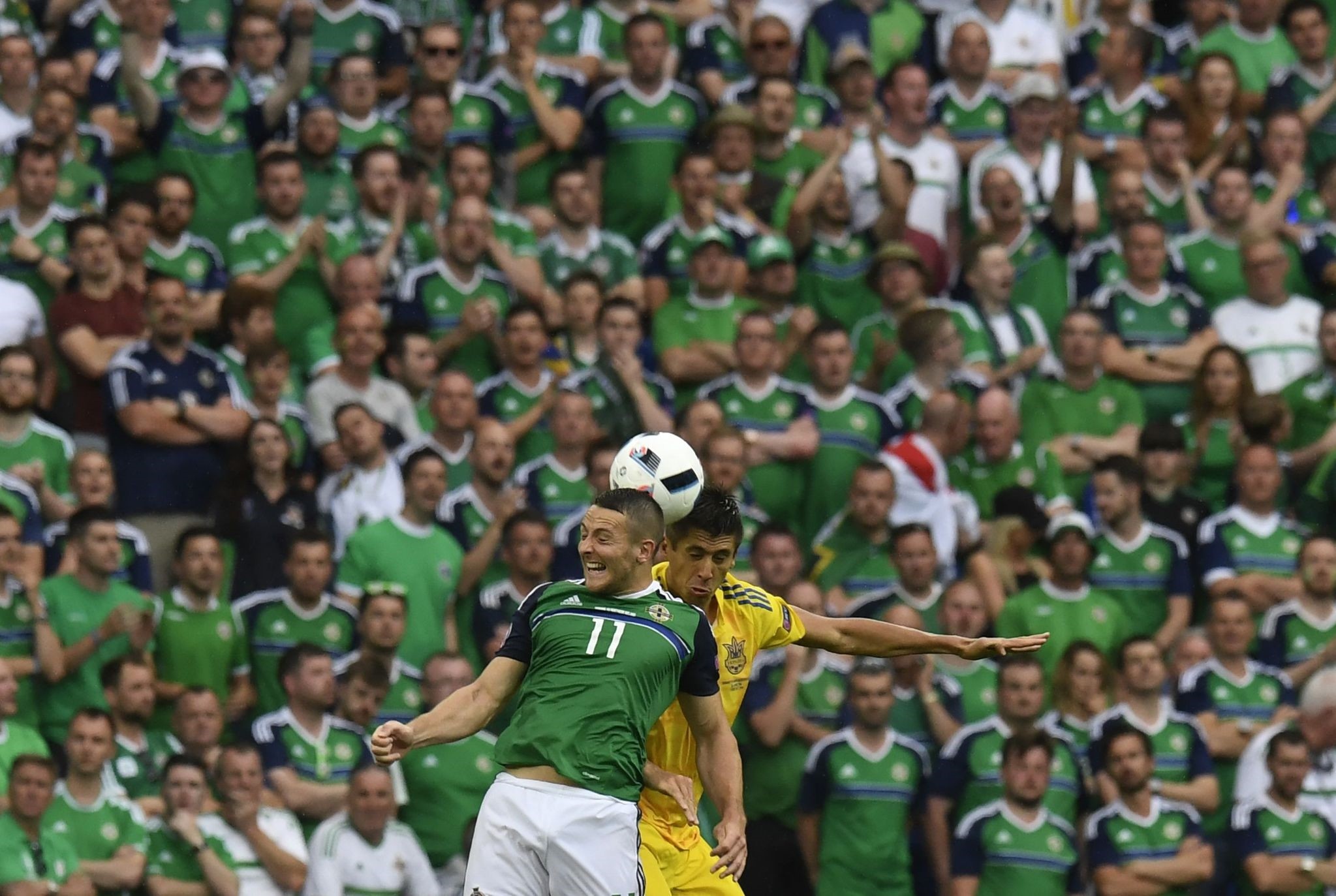 Northern Ireland is eyeing the prize of the Euro 2016 knock-out stages after goals from Gareth McAuley and Niall McGinn gave them a battling 2-0 win over Ukraine in soaking Lyon on Thursday.

Man of the match McAuley headed home the 49th minute opener from a set piece in a match of few chances, mainly played in torrential rain - with a hail storm even prompting a brief weather delay in the second half. McGinn then guaranteed the win deep into injury time.

Northern Ireland is now on three points before they play their last match against World Cup champions Germany on Tuesday. As the four best third-place teams progress, even a defeat there would not necessarily eliminate them.

"Fantastic performance. We were positive from the outset, everyone was magnificent," Northern Ireland coach Michael O'Neill said. "We just needed that level of performance, that level of intensity and we're alive and kicking in the competition now.

"We have a realistic prize at the end of the game against Germany. I'm delighted for the players."

Ukraine, without a point, could become the first team knocked out of the tournament should Germany draw with Poland in the other Group C game later Thursday to put both teams on four points.

"I think the players were not united today, they didn't fulfill the requirements," Ukraine coach Mykhailo Fomenko said.

"We allowed the opposing team to play its own football, that's why we lost."

Northern Ireland, having hardly launched an attack worthy of the name in their opening loss to Poland, made five changes and replaced forward Kyle Lafferty with Conor Washington in a bid to be more dangerous.

But despite plenty of effort, the main action in the opening minutes took place in the stands as fans scurried away from the touchlines in a desperate bid to avoid the downpour which put a slick coating on the pitch.

Northern Ireland fans staged a 24th-minute of applause in honour of supporter Darren Rodgers, who died in Nice earlier in the tournament, a tribute in joined by neutrals and Ukrainians in the 51,043 crowd.

The match was characterised by optimistic long-range shooting and crosses which were easily cleared before Northern Ireland began to take control.

A Jamie Ward corner was headed over by Craig Cathcart before Ward, collecting at the back-post, failed to find one of two well-placed team-mates when returned the ball across goal.

Captain Steve Davis then tried to catch out Andriy Pyatov with a drive from an acute angle but the Ukraine keeper reacted sharply to parry.

After the restart Yevhen Seleznyov flashed a header wide from a corner and just 60 seconds later McAuley showed him how it should be done. The 36-year-old ghosted away from his marker to meet Oliver Norwood's set piece with a firm header to leave Pyatov helpless.

"Obviously it's a fantastic thing personally to receive the man of the match award on such a stage," McAuley said. "But the main thing to me was performance of every single player out there.

"It was fantastic how we reacted after Poland game, that's the most pleasing thing for me."

Ukraine tried to respond and Seleznyov glanced another header straight at keeper Michael McGovern who gathered at the second attempt.

In the 58th minute the rain turned to hail and the referee briefly led the players off the pitch for a delay of around two minutes.

After the resumption Viktor Kovalenko shot just wide from 20 yards and then dragged another attempt well off-target having pounced on a poor clearance.

Substitute Olexandr Zinchenko sent a weak header into the arms of McGovern as the minutes ticked away and the keeper palmed away a stinging long shot from Andriy Yarmolenko.

And with virtually the last kick of the match, McGinn tapped in a rebound from close range to secure a first major finals victory for Northern Ireland since the 1982 World Cup.