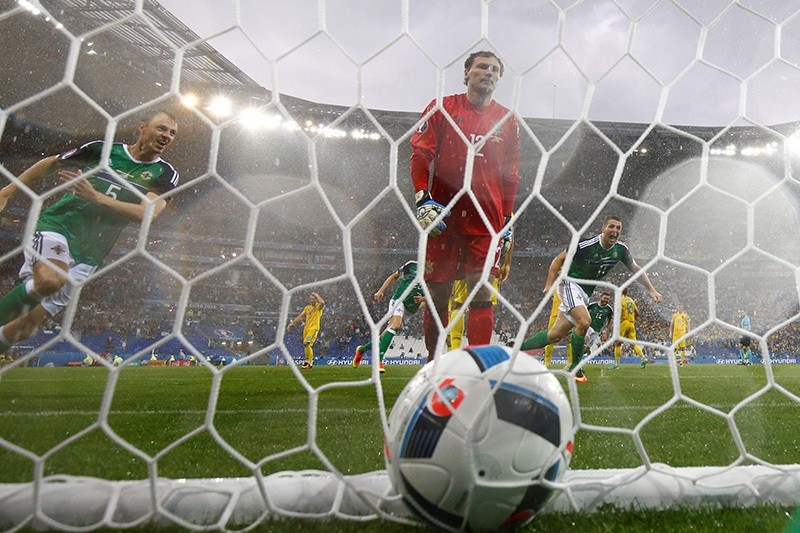 Germany provided the first goalless draw, England earned the first comeback victory and Ukraine became the first team to be eliminated from the European Championship on Thursday.

World champions in Brazil two years ago and 2-0 winners over Ukraine on Sunday, Germany went into its Group C game against Poland at the Stade de France as the clear favorites.

Instead, Germany was kept in check by a well-organized Poland side that also had the best chance to break the deadlock in a dour game.

Arkadiusz Milik, who had scored Poland's winner against Northern Ireland on Sunday, miscued a header as he fell to his knees in Germany's goalmouth and the ball bounced wide.

"We created few chances today," Germany coach Joachim Loew said. "We didn't increase the tempo and then nine of 10 Poles were behind the ball."

For a second match running, Gareth Bale scored with a long-range free kick to put Wales 1-0 up in a match.

But unlike its opening-game win over Slovakia, this time there was only disappointment after the break as England substitutes Jamie Vardy and Daniel Sturridge turned the match around for a 2-1 victory.

England coach Roy Hodgson doesn't have a reputation as a hardened gambler when it comes to substitutions. So the sight of Vardy and Sturridge walking on for the second half, instead of Harry Kane and Raheem Sterling, was little short of astonishing.

With teenager Marcus Rashford then replacing Adam Lallana in the 73rd minute, Hodgson ended up deploying three forwards plus Manchester United striker Wayne Rooney in a playmaking role to try to shake things up in the Group B match.

Vardy leveled in the 56th minute and Sturridge rifled home the winner from a similarly close range in stoppage time.

"We made the decision (on the substitutes) early. It was the right decision," Hodgson said.

"We were anxious to inject a little bit more tempo and pace into our game, and we were anxious to persuade the players to take a few more risks and to show more confidence in themselves in the penalty area."

Northern Ireland later claimed its first tournament victory in 34 years with a 2-0 win over Ukraine. With the loss, Ukraine became the first team in the tournament assured of not advancing to the knockout stages.

Gareth McAuley put his side ahead with a header in the first half and Niall McGinn padded the lead by driving the ball home in the sixth minute of stoppage time.

Unrecognizable from the side that surrendered meekly in a 1-0 defeat to Poland, Northern Ireland played sharply in its first tournament win since beating host nation Spain at the 1982 World Cup.

"It has been a long time," McAuley said. "We talked about leaving a legacy from this tournament. A few years down the line when I am finished and I look back on it, it will be extra special. It's just sinking in, and now it means staying in the tournament."

The victory was marred, though, by the death of a second Northern Ireland supporter at Euro 2016.

"The fan passed away as he was watching the game in the stadium," said Patrick Nelson, chief executive of the Irish FA, the game's ruling body in Northern Ireland. "This puts any result of a football match into perspective."

Away from the stadiums, the French justice system continued to deal with the aftermath of last week's violence in Marseille involving fans from England and Russia, as well as local youths.

Three Russian fans were sent to prison for up to two years and French officials announced plans to deport 20 others next week for their role in the violence.

However, the day ended with no major incidents involving fans in the northern towns of Lille and Lens, contrary to earlier fears.