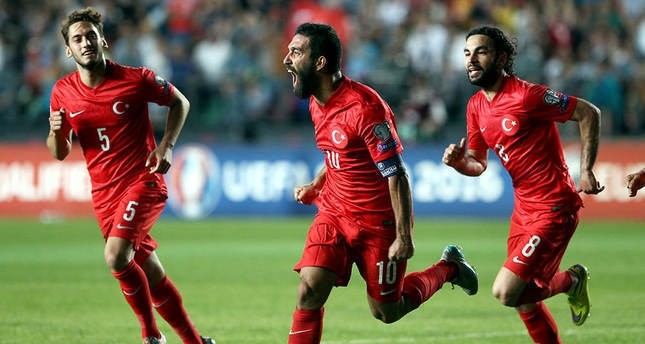 Aside from scoring their first goal of the tournament, Turkey would need other results to go their way even if they do win, while victory for the Czechs would put them on four points and in a good position to make the last 16

Turkey have left it late to bid for a place in the knockout stage of Euro 2016 but defender Gökhan Gönül believes they still have a chance, if they can beat a buoyant Czech side in their final Group D game today.

"There is a thing the Turkish national team always does, which is chasing the game until the last minute," the 31-year-old defender said.

"Again we have left it until the last game, maybe we don't have much of a chance this time, but we will still do our very best and hopefully, with the help of some luck, we can defeat the Czech Republic and go through."

The Czechs, though, are full of confidence after fighting back from two goals down to draw with Croatia on Friday. Turkey, by contrast, were lacking in bite when they lost 1-0 to Croatia in their opening game and 3-0 by reigning European champions Spain. Aside from scoring their first goal of the tournament in Lens, Turkey would need other results to go their way even if they do win, while victory for the Czechs would put them on four points and in a good position to make the last 16. Spain, who have already qualified for the knockout stages with two wins in their first two games, face a Croatia side looking for the win that would guarantee their progression in the tournament. The Czech Republic and Turkey claimed away victories against one another in a topsy-turvy qualifying group that the Czechs won, with Iceland coming second and the Turks qualifying directly as the best third-placed team, while a much-fancied Netherlands side missed out altogether.

"Turkey are a very strong side, they have a lot of good players who play for top teams," said Czech forward Tomas Necid.

"As a team, they have good link-up play and plenty of flair."

The Czechs will be missing their flair player, Tomas Rosicky, who has been ruled out of the tournament with a thigh injury sustained in their remarkable comeback from two goals down to draw 2-2 with Croatia. The Czechs have two players, Tomas Sivok and David Limbersky, who risk suspension for the knockout stages if they get another yellow card, while the Turks have five -- Burak Yılmaz, Cenk Tosun, Hakan Balta, Ozan Tufan and Volkan Şen - who will need to stay on the right side of Scottish referee William Collum.

Meanwhile, President Recep Tayyip Erdoğan defended Arda Turan and coach Fatih Terim who have been criticized harshly after two defeats in Euro 2016. During the iftar dinner with sportspeople and famous artists at the Huber Kiosk on Sunday, Erdoğan said, "As the president of this country, I must say that I'm very sorry about what had happened. Our team was consecutively defeated in the first two matches. Our captain (Arda Turan) and coach were booed by our own spectators. I can't explain this attitude because those who booed them were praising them when they qualified for Euro 2016. Shame on you. Spanish footballers hugged, consoled Arda Turan and Spanish fans cheered for him. On the other hand, there was verbal abuse for our coach and his family. It is disgraceful. There is no such attitude in our culture and tradition. I congratulate them whatever results they get."

Elsewhere, when Croatia meet Spain in their final Euro 2016 group match today there will be as much scrutiny of developments in the stands as on the pitch. UEFA opened disciplinary proceedings after Croatia fans threw flares and ran on to the pitch during their opening Group D game, a 1-0 win against Turkey. Then Friday's 2-2 draw with the Czech Republic was halted with four minutes to play when supporters again threw flares and fought among themselves. After the teams returned to the pitch, Croatia's players felt their concentration had been disturbed, which contributed to the Czechs scoring a late equaliser with a penalty. That means instead of already having qualified for the last 16 along with Spain, Croatia still require a point from today's game, adding to the tension of the occasion.

Although Spain have already qualified, they want to win the group and meet a third-placed team in the last 16. Losing to Croatia would mean coming second and facing Italy, the winners of Group E.
Last Update: Jun 21, 2016 1:15 pm
RELATED TOPICS