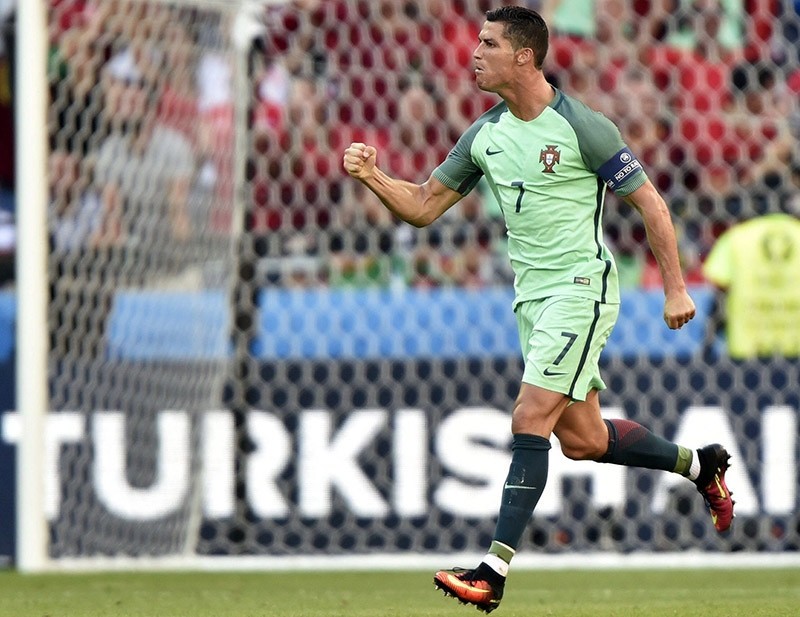 Cristiano Ronaldo of Portugal celebrates after scoring a goal during the UEFA EURO 2016 group F preliminary round match between Hungary and Portugal at Stade de Lyon in Lyon, France, 22 June 2016 (EPA Photo)
by Associated Press Jun 22, 2016 12:00 am

Memo to reporters at the European Championship: Don't disturb Cristiano Ronaldo on his morning stroll.

As he walked with Portugal teammates beside a lake in a park, Ronaldo responded to a seemingly harmless question ahead of Wednesday's game against Hungary by snatching the microphone off a TV reporter and apparently throwing it into the water.

"Are you ready for the game?" was all that had been asked by the journalist from the TV station of a Portuguese tabloid. The incident happened in front of a crowd of reporters and watching fans, and the journalist was ushered away by the team's security personnel.

The three-time world player of the year has had his issues with the tabloid in question, Correio da Manha, threatening to sue it twice over reporting about his private life.

Ronaldo, the most high-profile player at Euro 2016, had not having been having the best of times in France.

He had failed to score in 22 attempts on goal across Portugal's first two matches, which ended in draws against Iceland and Austria. One of his chances was a penalty, which he struck against the post against Austria.

However, his luck certainly changed on Wednesday evening in Lyon.

Ronaldo scored two excellent goals to earn Portugal a 3-3 draw against the Hungarians - a result that earned his team a place in the knockout stages of the tournament.

Previously, Ronaldo attracted negative headlines for belittling Iceland's defensive tactics after the smallest nation ever to play in a European Championship held Portugal to a 1-1 draw.

Meanwhile over in the United States, Lionel Messi — Ronaldo's big soccer rival — cannot stop scoring and setting up goals in Argentina's march to the Copa America final. Messi scored one goal, a brilliant free kick, to break his country's career scoring record and set up two others in Argentina's 4-0 win over the U.S. team in their semifinal Tuesday.