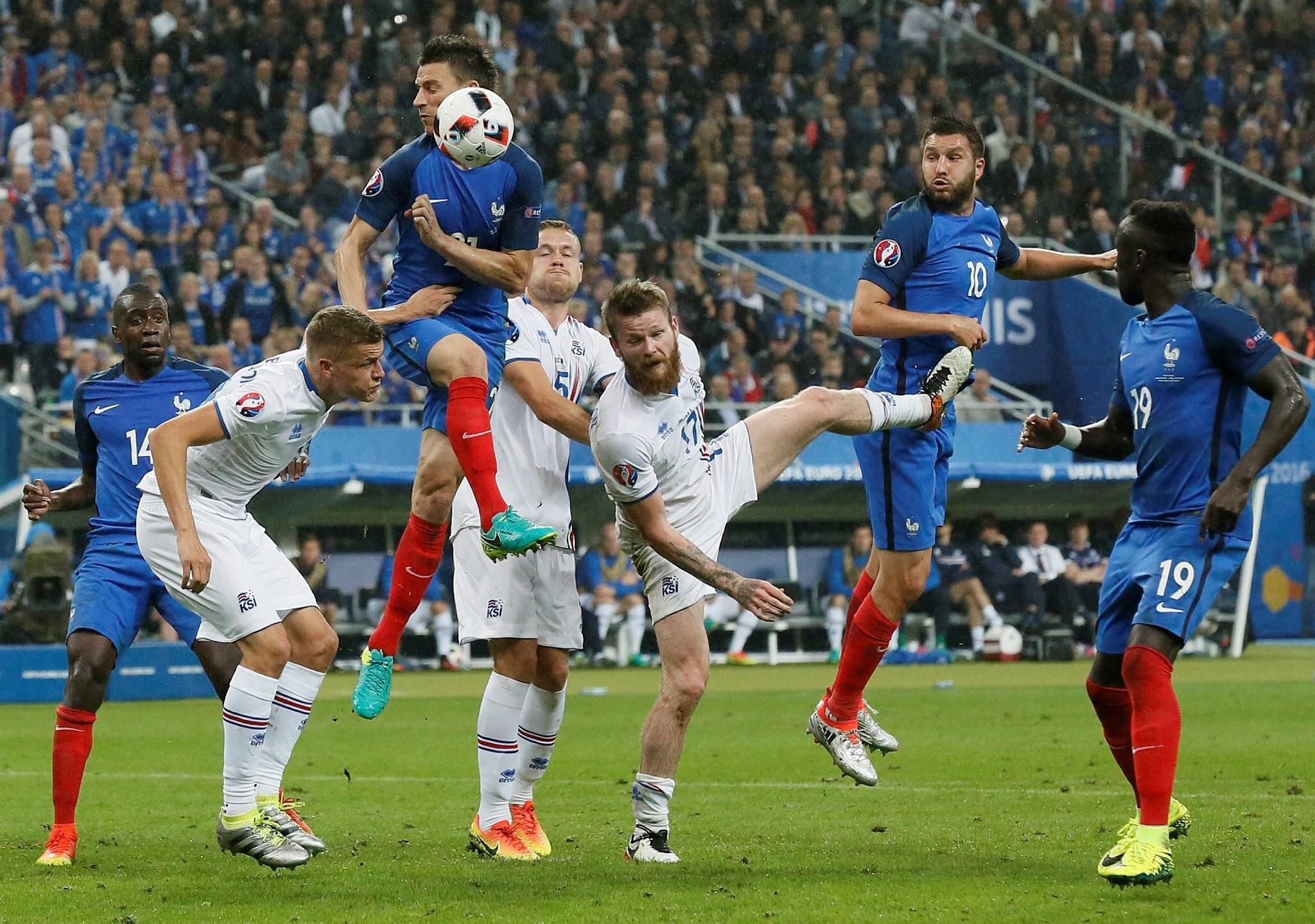 | EPA Photo
by Jul 03, 2016 12:00 am
Rampant hosts France brutally ended Iceland's fairytale run at Euro 2016 with a crushing 5-2 victory on Sunday for a semi-final date with world champions Germany.

France were 4-0 up at half-time as Olivier Giroud's double, Paul Pogba, Dimitri Payet and Antoine Griezmann lifted Les Bleus in front of 76,833 fans on a wet night at the Stade de France. Iceland's goals came from Kolbeinn Sigthorsson and Birkir Bjarnason.

Iceland had impressed in their tournament debut, most notably by ousting England 2-1 in the last 16, but finally ran out of steam - after Lars Lagerback and Heimir Hallgrimsson had fielded the same starting 11 as in the four previous games.

While Iceland now go home, France will travel to Marseille with plenty of confidence for another intriguing game with the old foes Germany on Thursday.

Germany beat France 1-0 in the 2014 World Cup quarters but the scorer from that game, Mats Hummels, is suspended; and Die Mannschaft have also lost in-form striker Mario Gomez with injury and fear for Sami Khedira and Bastian Schweinsteiger as well.

Like in the second half of their 2-1 comeback win against Ireland, Griezmann moved from the right wing to a deeper position behind Giroud.

France had not scored in the first half in their first four games but got the desired early lead in the 12th. Blaise Matuidi chipped the ball over the Iceland defence and Giroud ran away from Kari Arnason to beat Hannes Halldorsson from a left angle.

Cheered on by the large contingent of some 10,000 fans, Iceland tried to respond, and they did get a first chance when Jon Dadi Bodvarsson aimed after one of the feared long throw-ins from captain Aron Gunnarsson was headed on to him.

But France controlled the action pretty easily and the match was over as a contest in the 43rd when Payet drilled home a low shot from the edge of the area after Iceland failed to decisively clear a cross.

Griezmann then added insult to injury when he chipped the fourth over Halldorsson on ther stroke of half-time, off a pass from Pogba and a dummy from Giroud, going to the top of the scorers' chart with four goals with what was also the 100th goal of the tournament.

The biggest victory in Euro finals history - the Netherland's 6-1 over Yugsolavia in 2000 - was now under threat.

Iceland finally got on the scoresheet from Sigthorsson's tap in the 56th but it took just three further minutes until Giroud headed in Payet's free-kick for 5-1 - his last duty though as he was taken out of the match right after in exchange for Andre-Pierre Gignac.