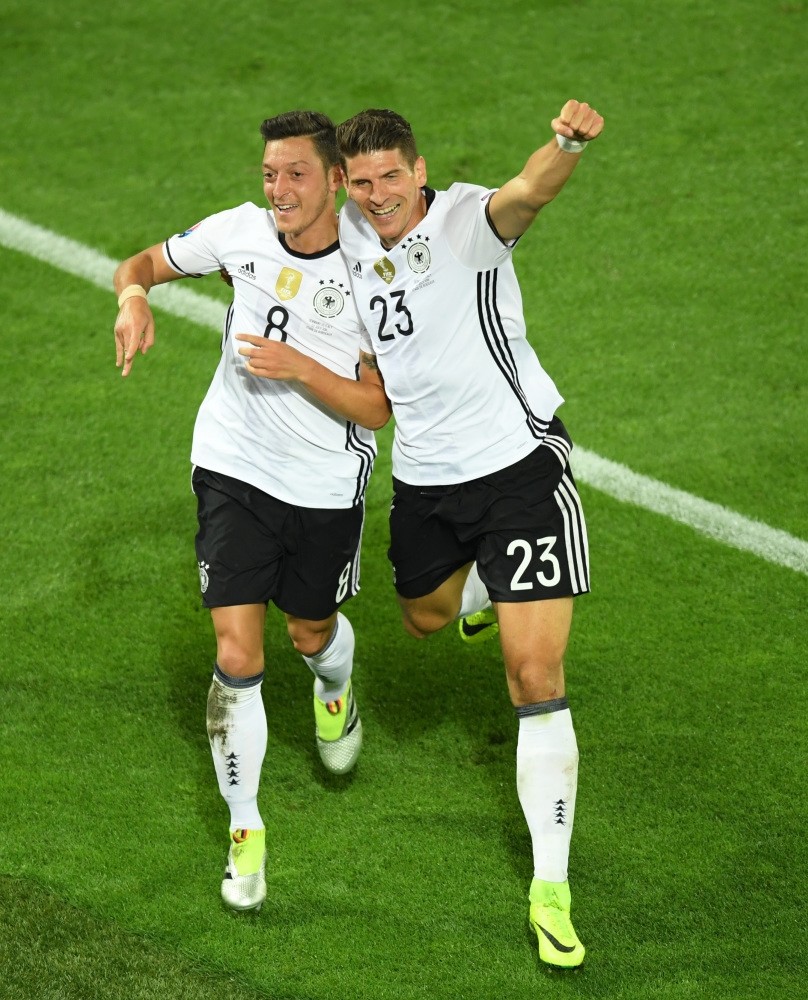 Despite missing more penalties in one shootout than it had done in 40 years of taking spot-kicks after extra time, Germany still managed to end its curse against Italy. Thomas Mueller, Mesut Özil and Bastian Schweinsteiger all missed in Saturday's shootout after the sides finished 1-1 following extra time in their European Championship quarterfinal. Fortunately, goalkeeper Manuel Neuer spared their blushes with two saves as Italy missed four spot-kicks and Germany went on to win 6-5, securing the team's first competitive victory over the Azzurri at the ninth attempt. "It was a war of nerves," Neuer said.

Only two German players had ever missed in a tournament shootout before - Uli Hoeness as West Germany lost the 1976 European Championship final 5-3 to Czechoslovakia, and Uli Stielike as West Germany defeated France 5-4 in the 1982 World Cup semifinal. It was a dramatic shootout in Bordeaux, featuring 18 spot kicks with neither side striking a decisive blow before it went to 'sudden death.'

"I've never experienced a penalty shootout like it before. It went on for ages. I'm not sure how many penalties there were exactly," Neuer said.

There had been a penalty beforehand too, scored by Leonardo Bonucci in the 78th minute to cancel out Özil's opener from 13 minutes before. With extra time almost at an end, Italy coach Antonio Conte brought on penalty specialist Simone Zaza on for Giorgio Chiellini, but the move backfired when he missed after an unconventional trot up to the ball. Then Mueller's curious failure to score at a European Championship came back to haunt him when his effort was saved by Italy veteran Gianluigi Buffon. Andrea Barzagli scored before Özil struck the post, leaving Italy with a 2-1 lead. Then Graziano Pelle dragged his effort wide and Julian Draxler equalized to make it 2-2. Germany had the advantage when Neuer saved Bonucci's spot kick.

But German celebrations were cut short when Schweinsteiger, who could have sealed victory by converting his spot-kick, struck his effort well over. Neither side missed their next three penalties. Then Neuer saved Matteo Darmian's spot kick, paving the way for Jonas Hector to be the hero with the winning shot.

"I'm delighted that it went in," Hector said. "There weren't many more people there (to take a penalty). I took my heart in my hand and just wanted to make sure it went in."

Hector's strike penalty ended a winless curse against Italy that dated back to their first meeting at the 1962 World Cup.

"After so many years or decades we were due a win against Italy," German football federation president Reinhard Grindel said. "From that point of view, the right ones had the luck that you need in a shootout."

Germany coach Joachim Loew had tried a new tactical setup with a three-man defense, but in the end it was an old friend - the penalty kick - that provided the key to victory. However, Neuer is anxious to avoid a similar situation when the team plays a semifinal against France or Iceland in Marseille on Thursday.

"You can't just rely on the fact that Germany comes through every time there's a penalty shootout," Neuer said.
RELATED TOPICS