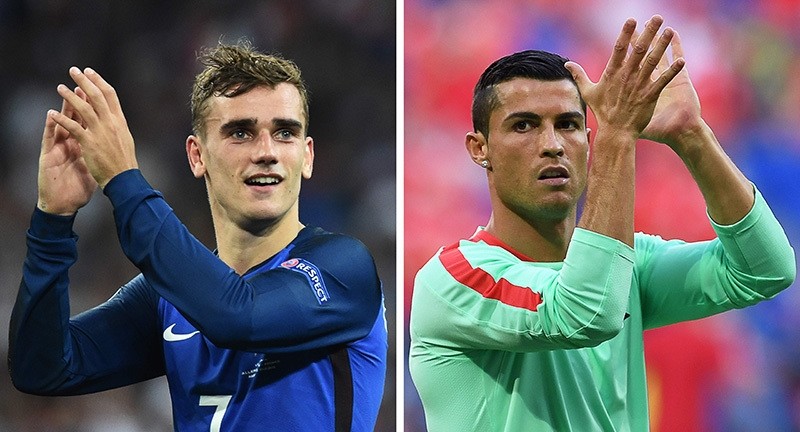 Hosts France are one victory away from a third straight major football title at a home event but in Sunday's Euro 2016 final face a Portugal team desperate to lift a first trophy at last. The finale of the month-long tournament brings together French tournament top scorer Antoine Griezmann and Portugal superstar Cristiano Ronaldo who wants a national team title at last to go with his club silverware. France have impressed more than Portugal and have a clear edge in their head-to-head, winning 18 of the 24 matches and losing only five, the last in a 1975 friendly. Victories include those in the semi-finals of Euro 1984 and Euro 2000 where Les Bleus lifted the trophy on both occasions. Another success Sunday would make them equal the record three titles from Spain and Germany. The hosts went unbeaten for the title at the Euros 32 years ago and again at the 1998 World Cup where their current coach Didier Deschamps captained the team to victory at the Stade de France. Deschamps and his talented team now hope for a home title hat-trick after beating world champions Germany 2-0 on Thursday in the Marseille semi from a double by Griezmann who now has a tournament tally of six goals.

"I hope we'll lift the trophy ... We're thrilled, we feel like kids. We know the whole country is behind us, so we're giving everything for them," Griezmann said after France beat the Germans for the first time in 58 years at a big tournament.

France went into a collective frenzy after the big win, with parties across the country lasting into the early hours of Friday, but the players and Deschamps are all to aware that its not over yet.

"The most important step is Sunday," Deschamps said. "We have our chances and so do Portugal. As host nation, and because we've knocked out Germany, that doesn't give us extra powers. We believe in ourselves, so do Portugal."

Both teams cite a tightly-knit unit for the success run but France arguably have the bigger number of individual class with the likes of Griezmann, Paul Pogba, Dimitri Payet, Olivier Giroud and veteran Patrice Evra.

Deschamps was successful in moving Griezmann from the right wing into a deeper role behind Giroud, and Samuel Umiti has also impressed in his first caps after originally replacing the suspended Adil Rami in the 5-2 quarter-final demolition of Iceland. Portugal are led by the captain Ronaldo who scored his third goal of the tournament and set up the other in Wednesday's first semi which they won 2-0. Nani, teenager Renato Sanches, defender Pepe and William Carvalho, who will be back from suspension Sunday, are other outstanding players. Portugal may have lacked flair until the Wales game which brought their first win in six matches in France in 90 minutes, but the very well organized team of coach Fernando Sanchez is very hard to break down. They have however not yet played a team of France's calibre. Sanches said the bad record against France will not affect the players at all because "Portugal should have no fear for other teams. It is our aim to win the final."

"We may not be a world class team but we are no pushovers either," insisted Santos, whose Portugal term started two years ago with a 2-1 friendly defeat against France at the Stade de France. Ronaldo meanwhile wants to erase the shock of the Euro 2004 final in which Portugal were beaten 1-0 by unheralded Greece, and he a 19-year-old starlet in his first major event. Now he has the most ever games at Euros with 20, and is joint Euros all-time top scorer with nine goals - but the trophy is still missing.
RELATED TOPICS