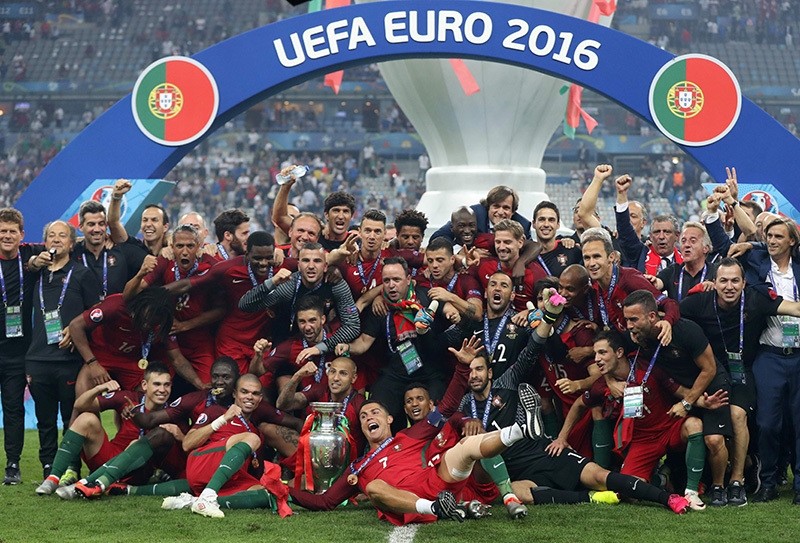 Portugal's squad and teammates pose with the trophy as they celebrate after beating France during the Euro 2016 final football match at the Stade de France in Saint-Denis, north of Paris, on July 10, 2016. (AFP Photo)
by Daily Sabah with DPA Jul 10, 2016 12:00 am

France had the better chances in Sunday's Euro 2016 final with Portugal, who played on without injured star Cristiano Ronaldo, but the tie went into extra-time after a goalless 90 minutes. In the 108th minute of the extra time, Eder scored for Portugal, bringing the score to 1-0. After 12 minutes of heavy play, the team made Ronaldo's dream real and became the champions.

Substitute Andre-Pierre Gignac hit the post in injury-time while Antoine Griezmann missed a good opportunity on 66 minutes when he headed over a brilliant cross from substitute Kingsley Coman.

The Bayern Munich winger also set up Olivier Giroud for a shot well-saved by Rui Patricio, who later did well to keep out a piledriver from Moussa Sissoko.

In the first half, tournament top-scorer Griezmann and Sissoko both forced Portugal keeper Patricio into impressive saves while after the break France stopper Hugo Lloris reacted sharply to palm away a cross from Nani.

Portugal's hopes of a first-ever major title suffered a blow as Ronaldo went off with an apparent left knee problem midway through the first half after a jarring eighth-minute tackle from Dimitri Payet.

Around 300 million people have been estimated to watch the game on television worldwide.