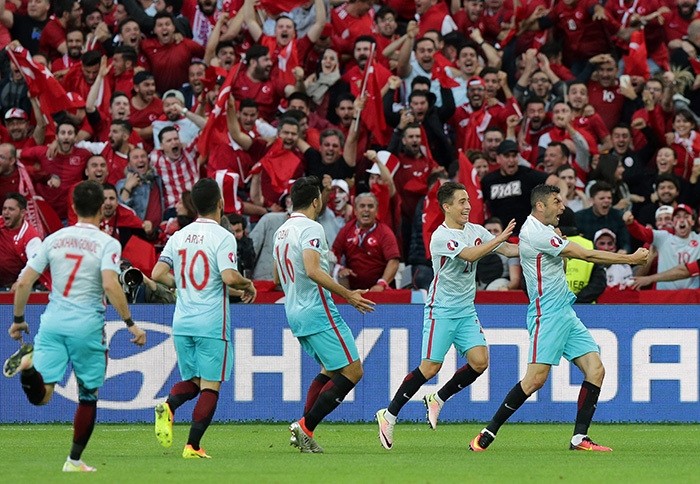 Burak Yilmaz of Turkey (R) celebrates after scoring the 1-0 goal during the UEFA EURO 2016 group D preliminary round match between Czech Republic and Turkey at Stade Bollaert-Delelis in Lens Agglomeration, France, 21 June 2016. (EPA Photo)
by Daily Sabah Jul 28, 2016 12:00 am

Turkey will host Russia in a friendly football match ahead of the 2018 World Cup qualifiers, a step taken to help repair strained relations between the countries after the jet-downing incident in November

Relations between Turkey and Russia have quickly improved since the two countries began to restore relations after a freeze last year over Turkey's downing of a Russian fighter jet for violation of Turkish airspace. The national football teams of both countries are scheduled to play a friendly match in August in Turkey according to the Turkish media.

President Recep Tayyip Erdoğan is expected to invite Russian President Vladimir Putin to the match, scheduled to take place in the southern Antalya province on Aug. 31. Turkey's National Team will face Russia in its first friendly ahead of the World Cup qualification match against Croatia on Sept. 5.

Relations were severely damaged after the downing of a Russian jet in November 2015. Positive bilateral steps taken by both countries have helped repair relations, particularly in terms of bilateral trade and economic activities.

The friendly game is expected to support the steps taken by the authorities and help tourism in southern Turkey, particularly in Antalya, where many Russian citizens reside.

Moscow has responded positively to Ankara's recent attempts to break the ice and welcomed President Recep Tayyip Erdoğan's letter to Russian President Vladimir Putin on the occasion of Russia Day, while Russia's Ambassador to Ankara Andrey Karlov's attended an iftar (fast-breaking meal) hosted at the Presidential Palace in June.

Deputy Prime Minister Mehmet Şimşek says Erdoğan is expected to visit Russia on August 9, set to be the first visit by a state leader since the incident of the jet in November 2015. On July 25, Şimşek was the first high-level official to visit Russia, together with Economic Minister Nihat Zeybekci.

Although no details were confirmed about the friendly match, Erdoğan may make an appearance on the pitch in memory of his football days in the '70s, when he yearned to become a professional player before turning to business and then later making his way into politics. Although he often attends football matches, the 62-year-old Erdoğan avoids taking to the pitch. He made an exception in 2014 when he donned a jersey and even scored a hat-trick in 15 minutes during an exhibition match for the opening of a new stadium.

Putin prefers ice hockey and occasionally takes to the rink.

After the incident in November, the furious Russian government responded by announcing sanctions against Turkey. Turkish food imports were blocked at Russian border gates after Jan. 1. Moscow called on Russians to not visit Turkey and opened up investigations into Russian tourism agencies organizing tours to Turkey. Russia refused to issue work permits for Turkish citizens and called for an end to visa-free travel.

In the past, Turkey has sought to improve relations with Armenia also through sports diplomacy. In an unprecedented move, Turkey accepted Armenian President Serzh Sargsyan's offer to then-President Abdullah Gül in 2008 to watch a World Cup qualifier in Yerevan. The attendance of both presidents, accompanied by fans, was hailed as the first sign of a restoration of ties between the two neighbors, long-divided over Armenian claims of genocide regarding the deaths of Armenians during World War I. Although Turkey and Armenia did not follow up the sports diplomacy with an improvement in their relations, it was regarded as a positive step towards building ties.