With Paul Pogba in top spot, here are 6 of the most expensive player transfers in football history 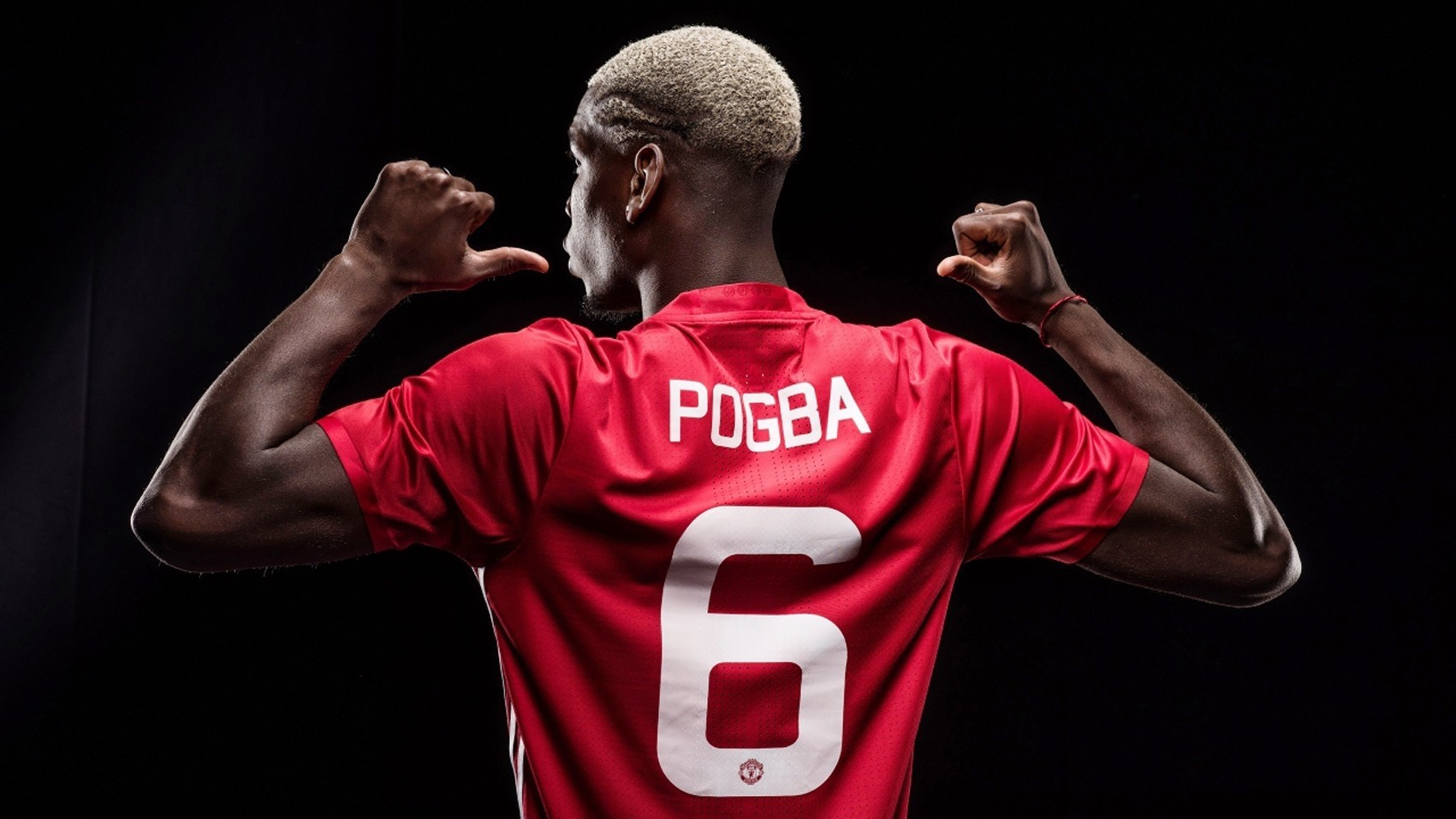 French star Paul Pogba's move from Juventus to Manchester United for 89 million pounds (105 million euros, $116 million), a sum confirmed by Juventus, makes him the world's most expensive player. Here are the most expensive transfers in football history:

Manchester United had been linked to offers for Pogba even when Louis Van Gaal was still coach. But the machine really started turning when Jose Mourinho took over on his mission to get United back into the Champions League frontrunners. The fee, 89 million pounds, confirmed by Juventus, could rise by five million euros "on achieving given conditions," the Turin club said without further details

The fact that Pogba had played for United as a teenager and was released for a pittance makes the transfer even more incredible. For a while Real Madrid had been contenders for Pogba's signature. 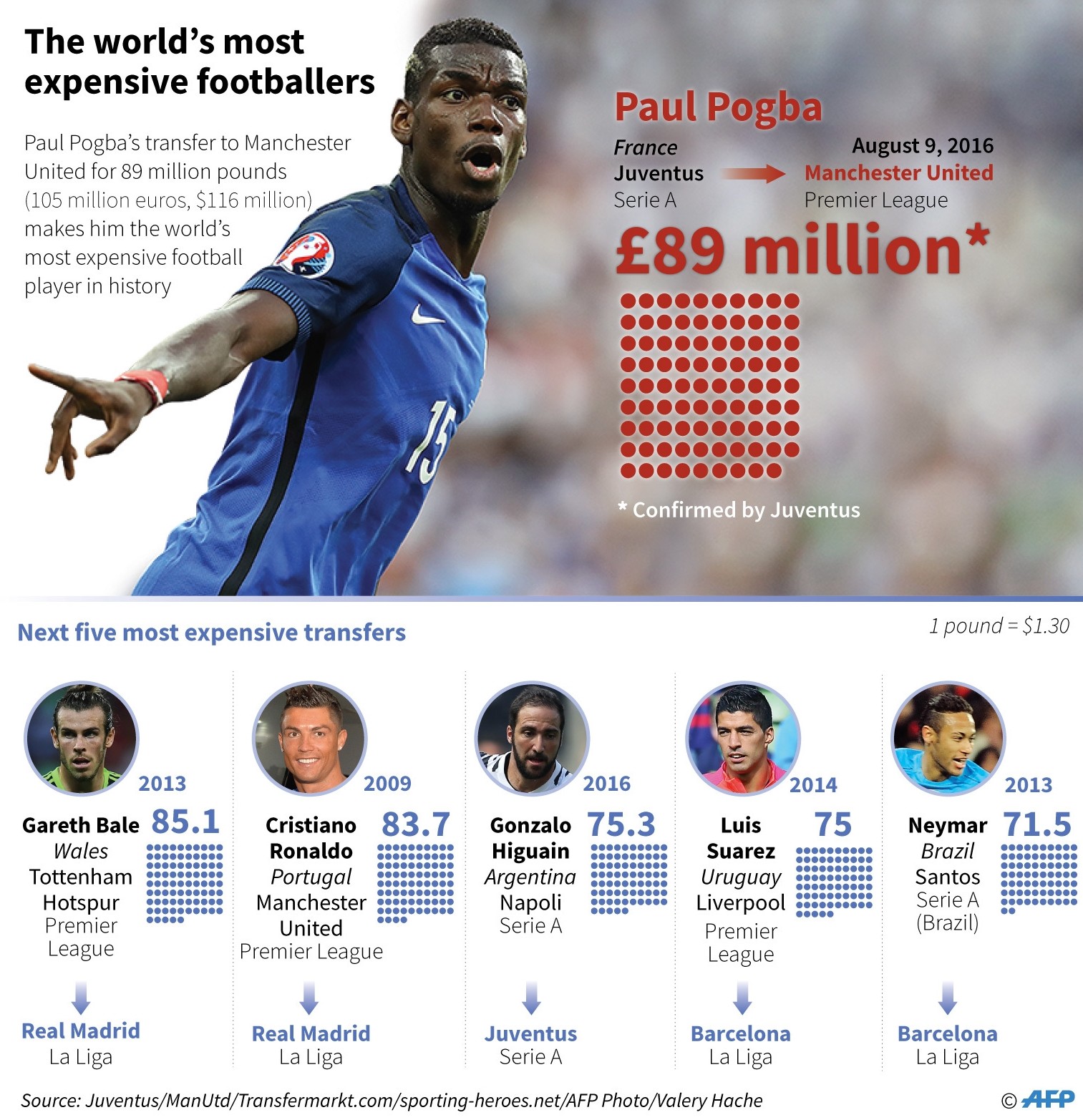 Welsh forward whose performances for an attractive Spurs side persuaded Real to bid for him. The English side could not refuse such advances and let their star man go. He has built on his career at the Santiago Bernabeu with two Champions League titles, scoring in the final of the first of the two against Atletico Madrid. His experience in La Liga helped him lead Wales in their memorable run to the Euro 2016 semi-finals. Bale also scored a stunning winner in the Copa del Rey final against Real's arch rivals Barcelona in 2014.

Real Madrid came calling for the Portuguese master with what was then a world-record bid. Ronaldo was keen to join, and since arriving in the Spanish capital he has become their all-time top goalscorer and consistently set records in the Champions League, which he has won three times in his career, twice with Real. He has achieved all this despite the hottest of competition from Barcelona's Argentinian superstar Lionel Messi, who still leads in the overall La Liga scoring charts.

Juventus paid the biggest fee for a domestic transfer in history when they matched Higuain's buy-out clause of 90 million euros to bring the Argentinian to Turin from Napoli last month. The 28-year-old former Real Madrid striker top-scored in Serie A last season with a record-equalling 36 goals as Napoli finished second to Juve. Coach Massimiliano Allegri led Juventus to a record fifth consecutive league title in 2016, but he will be hoping that Higuain can help his side improve in Europe, after following up their 2015 Champions League final defeat to Barcelona with a last-16 exit at the hands of Bayern Munich.

Barcelona didn't hesitate to sign the striker despite his shame at the World Cup finals when -- for the third time -- he bit an opponent, this time Italy defender Giorgio Chiellini. As a result Suarez was unable to play competitively or train with them for four months, but once his ban was over he repaid them in full. No disgraceful incidents have followed and he ended his first season with them by scoring in the Champions League final win over Juventus. His trident attacking partnership with Messi and Neymar yielded a La Liga record for three forwards of 122 goals that campaign. Scored a hat-trick to seal the league title for Barca last term and went on to complete the domestic double in a season in which he grabbed a staggering 58 goals.

Off the pitch alleged shenanigans over how much went to the player, his family and to the selling club itself have dogged Barcelona over the transfer of Neymar, who on the pitch has shone for them in their brilliant three-pronged attack. The Brazilian shrugged off an injury that ended his 2014 World Cup campaign early to play a pivotal role in Barcelona's Champions League success. Like Suarez, he scored in that final against Juventus, and collected La Liga and Copa del Rey winners medals. There was no let-up last term either as he scored in the Copa del Rey final against Sevilla. Legal problems still hover over the transfer despite a high court judge ruling that he didn't believe it could be pursued in the courts -- as the prosecutor takes issue with that decision.