Terim: Dropped stars may return to national team if they work hard 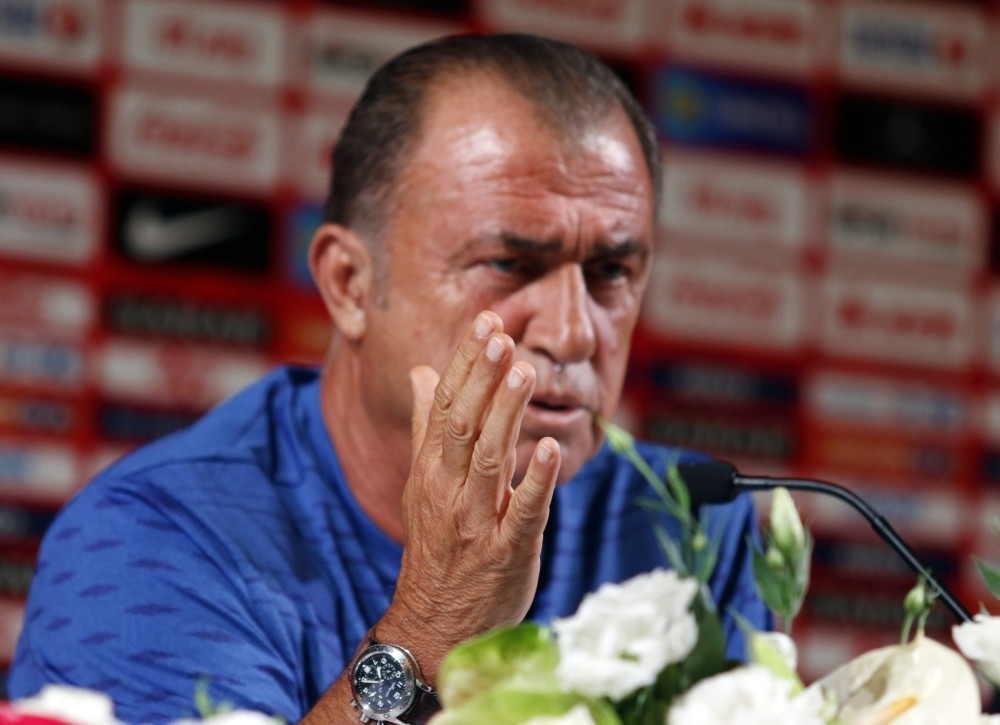 by Hakan Baş Sep 01, 2016 12:00 am
While Turkey prepare for their World Cup 2018 qualification campaign, head coach Fatih Terim the surprised Turkish footballing world by announcing a squad that omitted the likes of Arda Turan ahead of a friendly match against Russia. Speaking at a press conference on Tuesday in Istanbul, Terim made striking statements about Turkey's most famous football stars Arda Turan, Selçuk İnan, Caner Erkin, Gökhan Gönül, Hakan Balta and Burak Yılmaz, who were all dropped from national team. Referring to Turkey's disappointing performance at Euro 2016, Terim said, "The mistake was made against the Turkish people, not against me. This is not a personal issue, it is a principal issue. The problem is: Our footballers did not struggle enough, resist enough. This is what I was offended at. I have no personal problems with anybody. I am not the person who expects an apology. It is the Turkish people who deserve an apology. The door to the national team is always open to footballers who are enthusiastic about the honor of wearing this jersey, act worthily as a national team player both on or off field and want to be a part of this team.

"I don't want to make explanations about players. Don't expect it from me. I don't have to explain my preference about players. The players who are not here now serve the national team, not me. I am the captain of this ship. I did not throw out any of my personnel despite the storm that broke out. Either I was going to throw them out to the sea, or I was going to save this ship with minor damage. I think I saved my ship with minor damage. I did not cast out all the players for the same reason. Everybody who does what is necessary can serve again one day. They can serve when it's time and when they deserve it. But this is my choice at this moment. We must not personalize the issues. Nobody will be dropped when they conform to the criteria. And I'm ready to pay the price for my decisions."

Terim has made radical changes to the squad for the first friendly encounter since Turkey's disappointing Euro 2016 campaign. The Turkish national team will play against Croatia in World Cup qualifications next week. Arda Turan will be replaced by newer faces such as Başakşehir's Cengiz Ünder and Fenerbahçe's Salih Uçan.
RELATED TOPICS