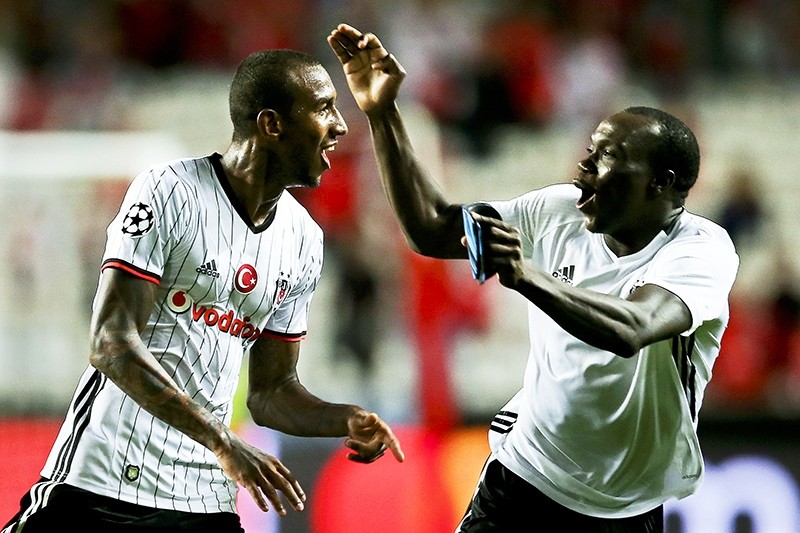 alisca (L) celebrates with his teammate Vincent Aboubakar (R) after scoring the 1-1 equalizer during the UEFA Champions League group B soccer match between Benfica Lisbon and Beu015fiktau015f. (EPA Photo)
by Daily Sabah with Agencies Sep 14, 2016 12:00 am

Talisca, who was loaned out by Benfica to Beşiktaş last month, struck a sensational last-gasp free-kick to earn the Turkish visitors a point in a 1-1 Group B draw in Lisbon

Former Benfica player Talisca scored from a free kick in injury time to give Beşiktaş a 1-1 draw against his previous club in Group B of the Champions League on Tuesday. Talisca, playing on loan after two seasons with Benfica, fired a well-placed left-foot shot past the wall three minutes into stoppage time. The Brazilian midfielder came on as a substitute at half time but had more shots than any other Beşiktaş player. The result left both teams trailing Napoli, who came from behind to defeat 10-man Dynamo Kiev 2-1 in Ukraine.

Argentine striker Franco Cervi had put Benfica ahead in the 12th minute after Beşiktaş goalkeeper Tolga Zengin could only parry an angled shot by Argentine midfielder Eduardo Salvio.

"It's a draw that feels like a victory," Portugal forward Ricardo Quaresma said. "I thought we showed too much respect for Benfica at the beginning, but perhaps that was due to inexperience. Some of our players are in their first campaign in this tournament. But the second half was different and we played more like our natural selves."

Benfica were in control for most of the match at the Estadio da Luz, but allowed some chances to Beşiktaş at the end. One of the best opportunities fell to substitute Cenk Tosun, who had a free shot from inside the area but sent the ball over the crossbar. Atiba Hutchinson also came close with a firm header that prompted a difficult save by Benfica goalkeeper Ederson early in injury time. Goncalo Guedes nearly added to Benfica's lead in the 84th when he had only the goalkeeper to beat, but his shot was blocked by Zengin's left foot. Benfica played without striker Jonas, the team's top scorer last season, who was nursing a right foot injury.

It was the first match between the teams in the European competition. Benfica lost to Bayern Munich in the quarterfinals last season, while Beşiktaş are trying to reach the knockout round for the first time. Benfica next play at Napoli, while Beşiktaş host Dynamo Kiev. Both matches are on Sept. 28.

Beşiktaş coach Şenol Güneş said, "We deserved to win. The rivals found the net because of our faults. We played against a host team who played in the quarter final last year. Talisca is a very talented player and he proved it."

Talisca - a second-half substitute in the Group B opener - sensed his moment as the game moved into added-time, with Beşiktaş trailing 1-0. Ricardo Quaresma noted Talisca's hunger when Beşiktaş were awarded a free-kick in a dangerous position. "When I picked up the ball, he asked me if he could hit it; he was feeling confident," the UEFA EURO 2016 winner recalled. "He strikes a good dead ball and I was happy for him that he scored, and that we got the draw."

Another of Talisca's team-mates, Andreas Beck, told UEFA.com that the Bahia native deserved praise not just for his winner, but for having adapted quickly to his new surroundings. "He's only a few weeks with us but the good thing is he knows a lot of the guys from speaking Portuguese and Spanish," the ex-Germany international said. "A lot of us know what it's like when you play against your old team; it's never easy, but Talisca played well and scored. He was almost like our match winner today.

"He has great qualities and his style of play is good for our team as we don't have a player like him," Beck continued. "He reminds us a little of a young Rivaldo. He has an unbelievable left foot and is a player who can really make a difference."

Defender Atiba Hutchinson spoke just as highly of the Brazilian, telling UEFA.com: "He's very positive and very creative on the ball. He's full of confidence and brings a different dynamic to the team, something that we've needed. We're all happy with his performance and obviously delighted with his goal."