Terim: Our credit is running low 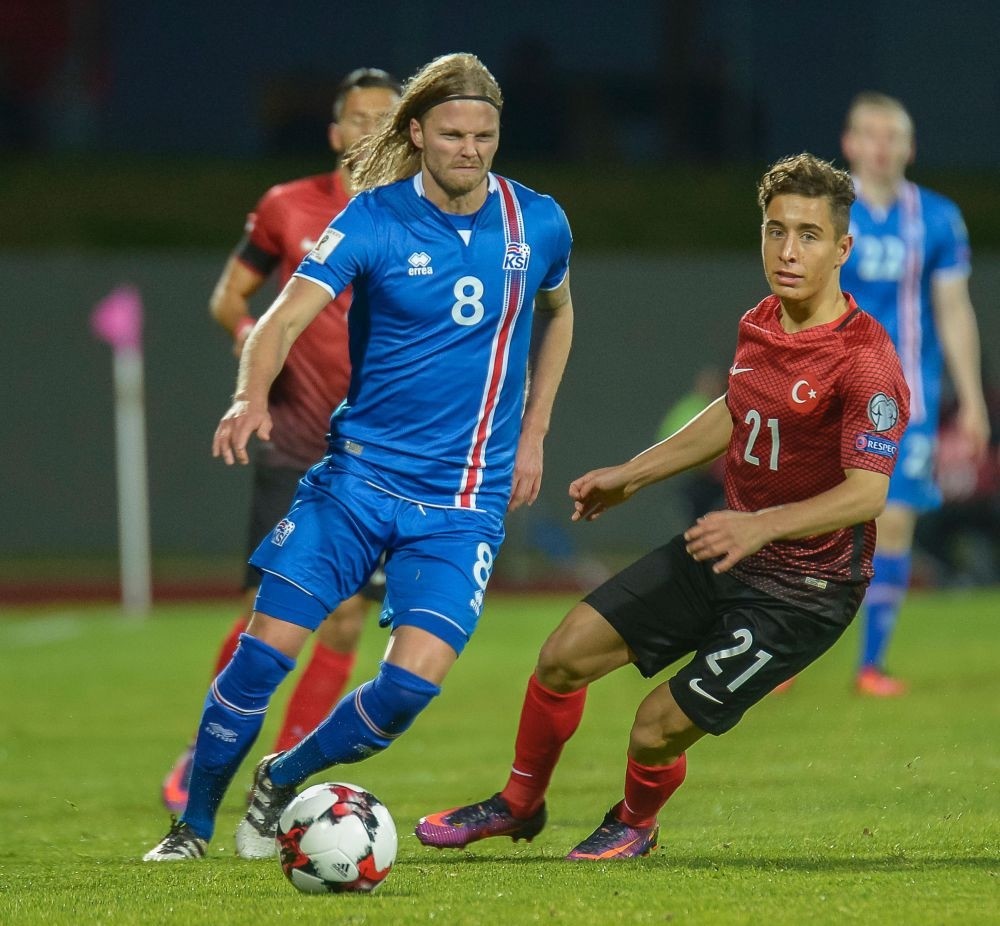 Icelandu2019s midfielder Birkir Bjarnason (L) and Turkeyu2019s forward Emre Mor vie for the ball during the 2018 World Cup qualifier football match of Iceland vs Turkey in Reykjavik.
by Daily Sabah with Wires Oct 11, 2016 12:00 am

After Iceland beat Turkey 2-0 in a 2018 World Cup qualifier match, Turkey coach Fatih Terim said, ‘Our credit is running low. Considering this, we must not lose from now on'

With Turkey eyeing qualification for the 2018 World Cup, the Crescent-Stars keep losing points in Group I. After Turkey lost two critical points at home against Ukraine on Oct. 6, their nightmare continued in Iceland. History repeated itself for Turkey, who have never won in six matches against the small island nation. Iceland beat Turkey 2-0 Sunday at Laugardalsvollur stadium in the capital Reykjavik. The first was an own-goal from center back Ömer Toprak before Iceland forward Alfred Finnbogason scored with a volley 90 seconds later, hitting the back of the net for his third international game in succession. This is Turkey's first defeat in three World Cup qualifiers. Turkey are in fourth place in Group I with two points.

The small nation of Iceland continues to surprise with Turkey the latest victim at the Laugardalsvollur stadium in Reykjavik.

Iceland went out to hosts France in the Euro 2016 quarterfinals. They reached the playoffs in 2014 World Cup qualification, losing to Croatia, which may prove its toughest opponent in the current qualifying campaign, too.

Coach Fatih Terim's Turkey, meanwhile, now have just one win from their last seven games, continuing a miserable year that also included a group stage exit at the Euros. Terim controversially left Barcelona's in-form midfielder Arda Turan, Burak Yılmaz of Beijing Guoan and Galatasaray's Selçuk İnan out of his squad after the country's poor Euro 2016 campaign when they went out at the group stage. His risky decision created stirs and divided Turkish public opinion. Some accuse Arda Turan of being involved in a spat with Terim while some support the coach's attitude, blaming footballers of being money-grabbers.

Terim said after the match, "Our credit is running low. Considering this, we must not lose from now on. We settled our game plan in the first 15 minutes of the match. After we conceded, I can't say that we played well. However weather conditions affected my team, too. We conceded bad goals...We could not deal with Iceland's aerial balls. "The national team is of particular concern for everyone, of course. But it must have its limits. Nobody can lay claim to it. There is no other country where so many people discuss a coach's decisions. I don't know how much it harms our team but time will show it. Our fight has not ended, it will not end. We are coming from behind and our fight will continue." Croatia and Iceland each have seven points but Croatia lead Group I on goal difference after their 1-0 win in Finland. Ukraine are two points back after a 3-0 victory over Kosovo, Turkey is next with two points while Finland are level with Kosovo at the bottom of the group on one point. Only the nine group winners in Europe qualify directly for the tournament in Russia. The best eight group runner-ups advance to a playoff.

As for the other Group I matches, Croatia's Mario Mandzukic hasn't had much luck in front of goal for Juventus this season, but he can't stop scoring for his country. Fresh off a hat trick against Kosovo, the Croatia star scored the only goal of the game in Finland with a simple finish from point-blank range. Meanwhile, it's been a tough life on the road for new FIFA member Kosovo. The loss to Ukraine in a game staged in Poland meant the Kosovans have conceded nine goals this week at neutral venues.
Last Update: Oct 11, 2016 1:33 am
RELATED TOPICS