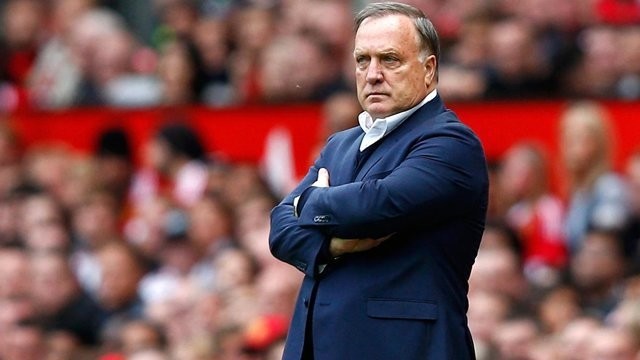 Fenerbahçe's Dutch manager Dick Advocaat is under pressure to turn around a disappointing season after another league setback for the Istanbul giants, days ahead of a Europa League clash against Manchester United

Fenerbahçe's disappointing performances continued at the weekend as the Yellow Canaries were unable to beat Super League newcomers Aytemiz Alanyaspor at home. Although Mehmet Topal's goal in the 36th minute put the Yellow Canaries ahead, the away team responded with Daniel Candeias' goal in the 59th minute. And in a week when their rivals Galatasaray and Beşiktaş won their away matches, Fenerbahçe are now nine points behind the top three teams, Başakşehir, Galatasaray and Beşiktaş who have 17 points each as of the seventh week.

It revealed an interesting statistic for Fenerbahçe. In the 21st century, the Yellow Canaries have always earned more than two points per game on average at home. But this year, they have only collected five points in four matches at home. Fenerbahçe managed an average of 2.48 points between 2000-2016 years. In their worst seasons, their average points at home has never dropped under two. In nine of the last 16 seasons, Fenerbahçe collected the most amount of points at home. As of the seventh week, Fenerbahçe drew third times and won only two matches. They were beaten by Bursaspor at the Ülker Şükrü Saraçoğlu stadium in Istanbul while they have only beaten Gaziantepspor.

Fenerbahçe's Dutch coach Dick Advocaat, who took the reins at the Yellow Canaries at the start of this season, admitted his own position was in question, saying the club "could find a better one (manager)" if it wanted.

Asked if he meant that he could be fired, Advocaat answered, "I would quit myself, no problem."

Advocaat said: "It is a disappointing result. If you aim to get a title, you have to win the matches at home. However, we have only won one match at home. I have ideas to solve this problem. But we must discuss them in our club. My players worked hard but it was not enough. We must find a solution. It can't go on like this.

"No excuse can be accepted. In every team, there can be injuries. We must do better. We scored the first goal. And then we could not score the second. That was the big problem because if you cannot find the second goal, you feel heavy pressure on yourself. Our rivals found the net with a counter attack. It was a very cheap goal, I must say."

The game against Alanyaspor saw Advocaat's compatriot, the former Manchester United star striker Robin Van Persie, play the full 90 minutes after an injury-plagued season. But he failed to have a major impact.

"If you want to play for the championship you need more. And I don't just mean Van Persie, I mean the total team."

"I can only blame myself and the players," Advocaat said late Sunday, adding the team had nonetheless "worked their socks off".

He admitted that Fenerbahçe were lacking effectiveness in front of goal. "Strikers must score goals. They want to score but they did not. You have to ask, why not?"

Fenerbahçe take on Manchester United away on Thursday in Group A of the Europa League in an eagerly-awaited reunion of Van Persie with his former club. The Turkish side in earlier matches beat Feyenoord at home but drew away to Zorya Luhansk.

In a colourful managerial career spanning over three decades, Advocaat had most recently managed clubs including Zenit St Petersburg and Sunderland as well as a successful stint of over three years with Scottish club Rangers from 1998-2001.

Meanwhile frustrated Fenerbahçe fans shouted "The administration must resign!" in the stands. The reaction of the fans went on after they left the stadium. The fans complained that the team is underperforming and they think the administration is responsible for it.
RELATED TOPICS