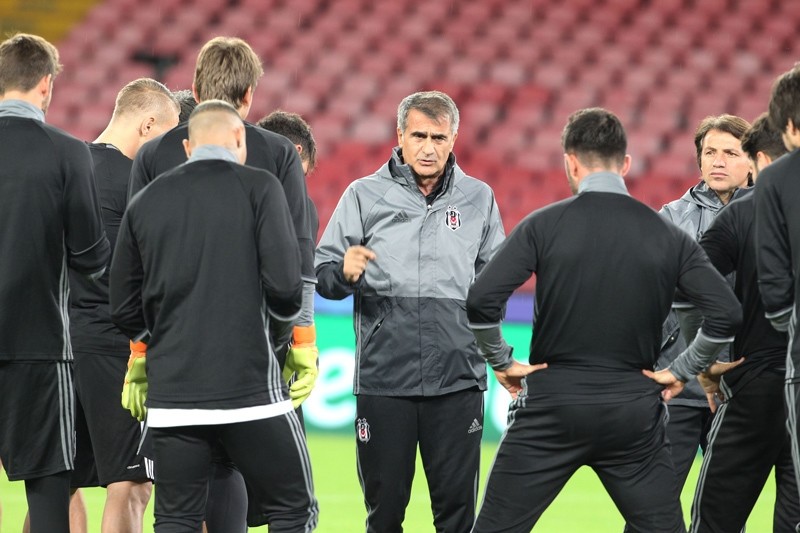 While the Black Eagles have not won in 11 meetings against Italian opposition, they will seek a first win Wednesday against Napoli in the Champions League Group B

Turkish defending champions Beşiktaş need to carry their domestic success into the Champions League. However, the Black Eagles Wednesday will be hosted by Group B's most challenging rivals, Napoli. Napoli have maximum points from two games and can create a slice of history with a third win when they host a Beşiktaş side who have drawn both fixtures so far in Group B. Beşiktaş have not won in 11 meetings with Italian teams, drawing two and losing nine. Their last such fixture came in the 2004/05 UEFA Cup group stage, when Parma FC beat them 3-2 at home. It is the first time the teams have met in European competition.

A Napoli win coupled with a draw between FC Dynamo Kyiv and SL Benfica would enable the Partenopei to become the first club ever to go through with three games still to play.

In 2013/14, Napoli's most recent UEFA Champions League group stage campaign, they won all three home matches - against Borussia Dortmund, Olympique de Marseille and Arsenal FC. Yet they failed to qualify for the knockout rounds despite collecting 12 points, more than any other side that has missed the qualification cut. In their only previous encounter with Turkish opponents, Napoli beat Trabzonspor 5-0 on aggregate in the 2014/15 UEFA Europa League round of 16. Napoli are unbeaten in 18 European home games (W13 D5) since a 3-0 loss to FC Viktoria Plzen in the 2012/13 UEFA Europa League round of 32.

A 1-1 draw at Benfica on matchday one came courtesy of a player from the Lisbon club as Talisca, loaned to Beşiktaş in August, struck a last-gasp equalizer. They were then involved in another 1-1 draw when Dynamo Kyiv pulled level on 65 minutes to cancel out Ricardo Quaresma's free-kick in the first half. Back in the UEFA Champions League for the first time since 2009/10, the Turkish Super League champions are hoping to negotiate the group stage hurdle for the first time at the sixth attempt. Seven years ago they picked up four points in their away games in Group B, winning at Manchester United FC. Losing all their home fixtures meant they finished bottom of the section.

Gökhan İnler played for and captained Napoli between 2011 and 2015, helping the Partenopei to win the Coppa Italia twice and the Italian Super Cup once. İnler played for Udinese Calcio for four seasons before that and on 17 April 2011 scored the opening goal in their 2-1 win over Napoli in Serie A.

Ricardo Quaresma scored the second goal in FC Porto's 2-2 draw away to Beşiktaş in the 2013/14 UEFA Europa League round of 16 to earn a 3-2 aggregate win. Quaresma was at Internazionale Milano from 2008 to 2010, making 24 Serie A appearances.

Caner Erkin is on loan from Inter after joining the Nerazzurri this summer from Fenerbahçe. Şenol Güneş was in charge of Turkey for the 1-1 friendly draw with Italy in Pescara on 20 November 2002.

Napoli had won their last ten home matches, scoring 34 and conceding eight, before Saturday's 3-1 defeat by AS Roma.

Milik, scorer of seven goals for Napoli this season, faces several months out after rupturing the anterior cruciate ligament in his left knee on duty with Poland against Denmark on Oct. 8.

Beşiktaş are ten matches unbeaten in regulation time in 2016/17 (W4 D5), though they did lose the Turkish Super Cup 3-0 on penalties to Galatasaray in August.

The Black Eagles have registered in each of their last 22 outings.

Adriano and Atiba Hutchinson collected groin injuries against Istanbul Başakşehir, but both featured in Saturday's 1-0 win at Kayserispor. Hutchinson had requested to be excused from duty with Canada citing a busy club schedule.

Dusko Tosic recovered from flu to face Kayserispor. Oğuzhan Özyakup has been struggling to shake off an ankle injury, while goalkeeper Tolga Zengin has a finger problem.

Vincent Aboubakar is still awaiting his first goal for the Black Eagles after seven competitive outings though he was on target for Cameroon on Oct. 5 in a 1-1 friendly draw with Olympique de Marseille.

Five of the eight goals conceded by Beşiktaş this season have come from set pieces.

Ricardo Quaresma has made 49 appearances in the UEFA Champions League, scoring eight goals: 1/2 for Beşiktaş, 0/8 for FC Internazionale Milano, 7/39 for FC Porto.

If Inler, who has had a toe injury, features against his former side on matchday three he will reach 50 appearances in UEFA club competition.
Last Update: Oct 19, 2016 12:04 pm
RELATED TOPICS