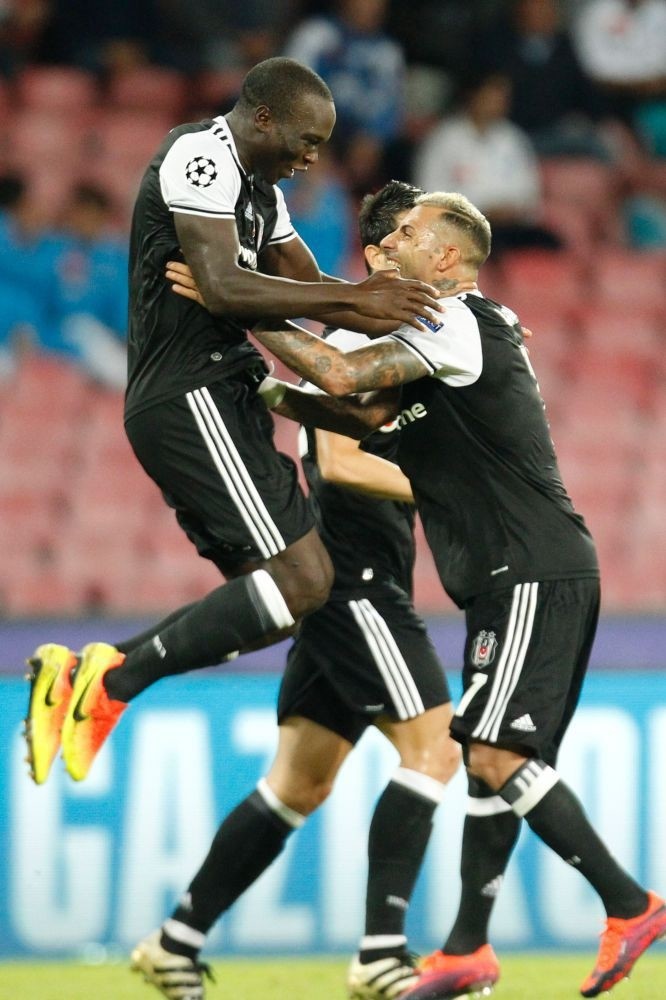 Vincent Aboubakar's late winner, his second goal of the game, earned Beşiktaş a 3-2 Group B success at Napoli after the Turkish vistors had twice let the lead slip. It was the Turkish side's first win in the competition since 2009

Cameroon forward Vincent Aboubakar hit a brace as a Ricardo Quaresma-inspired Beşiktaş ended Napoli's dreams of making Champions League history with a 3-2 win at the San Paolo on Wednesday. Napoli welcomed the Turkish champions knowing a third consecutive win in Group B, along with a draw between Dinamo Kiev and Benfica, would secure their entry to the last 16 with three games to spare and set a new competition record. But despite a promising start, Maurizio Sarri's men were wasteful in front of goal and paid the price for a glaring Jorginho blunder that saw 24-year-old Aboubakar give the visitors a 2-1 lead by the 38th minute. Napoli clawed their way back when Manolo Gabbiadini, demoted to the bench after 3-1 defeat to Roma last weekend, struck the leveller on 69 minutes after Lorenzo Insigne had missed from the spot shortly after the restart. But Napoli failed to capitalise on further chances and paid the ultimate price when Aboubakar headed Quaresma's delivery past Pepe Reina four minutes from the end.

Beşiktaş' first group win since 2009 kept them in second place to sit just one point behind Napoli, whose next game in the competition is an away trip to the Vodafone Arena in Istanbul next month.

Coach Şenol Güneş said: "It wasn't east playing against the top team in the group. They have such a strong attack, so we made a few tweaks and worked really hard on our defensive game.

"Napoli played well but we did well to score first and then we played on the counter-attack. It's a great win, I'm very happy."

"There was a series of episodes that could have really hurt a team but we always reacted well. So I consider this game a big step forward compared to the Roma match," Napoli manager Maurizio Sarri said, referring to a home loss to Roma at the weekend. "Unfortunately it ended with a result that doesn't reflect the course of the match."

Napoli will have to wait longer than anticipated before booking their place in the knockout phase, and Belgian forward Dries Mertens, drafted in as a replacement for injured Poland striker Arkaduisz Milik, was among the most disppointed.

"It's horrible to lose like this. We left everything out there, but we were unlucky," he told Premium Sport,

Mertens was handed a rare start in the striker's role and although he was their biggest culprit he soon vindicated Sarri's decision to leave Gabbiadini on the bench with a series of early chances, notably firing just over from 12 yards.

But Beşiktaş breached the Napoli net after just 12 minutes when Adriano powered through to fire Quaresma's superbly-weighted ball past Pepe Reina. Mertens went on to miss three times in succession to pull the hosts level, notably glancing a header wide from Lorenzo Insigne's smart delivery on 29 minutes. The Belgian finally made good a minute later when he powered past his marker to meet Callejon's perfectly-weighted delivery from the right to sidefoot past Fabri from close range. But eight minutes later Aboubakar pounced on an incredibly poor passback by Jorginho to beat Reina for a 38th minute lead. Wasteful in open play, Napoli were also off target in dead ball situations. When Fabri fouled Mertens in the area the referee pointed to the spot, but the Beşiktaş's keeper recovered to stop Insigne's tame effort four minutes after the restart.

Gabbiadini replaced Insigne on 65 minutes and four minutes later coolly stepped up to show his club-mate how it is done, beating Fabri from the spot after Caner Erkin had fouled Mertens. The hosts paid the price in the 86th minute when Aboubakar rose at the far post to meet Quaresma's delivery to beat Reina for the second time.
RELATED TOPICS