Ronaldo returns to form before Real's visit to Warsaw 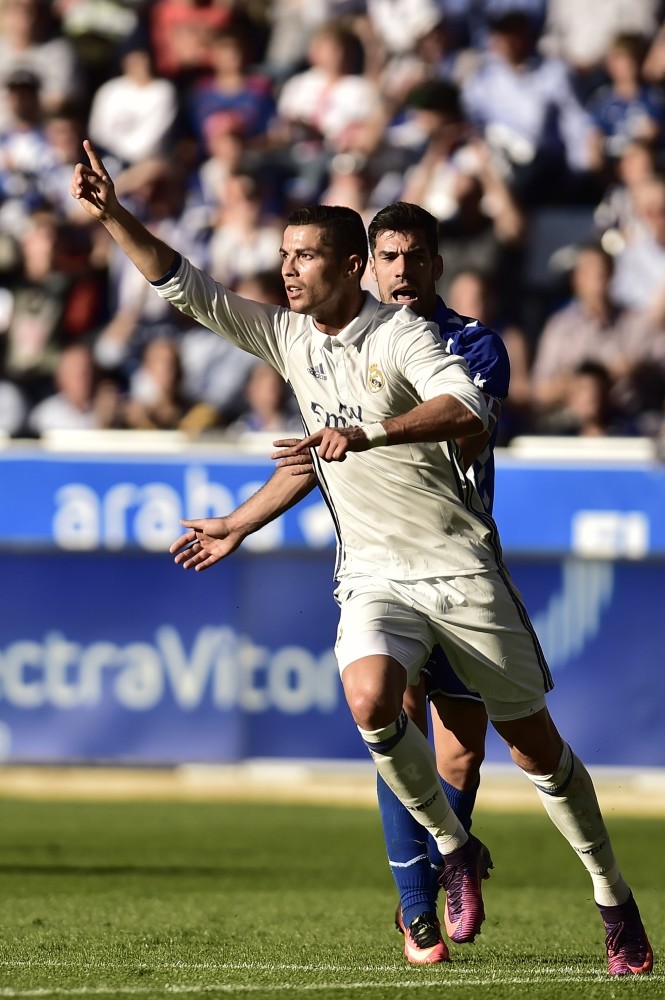 Cristiano Ronaldo is finally returning to form for Real Madrid, with a hat-trick at Alaves, just before today's crucial Champions League visit to Legia Warsaw

Let the word go out to friend and foe alike, Cristiano Ronaldo is back among the goals - which could very well be bad news for Legia Warsaw.

After a stuttering, injury-plagued start to the season which saw him score just four goals in two months, the Portuguese hitman finally came good for Real Madrid on Saturday at midtable Alaves, with an impressive hat-trick in a 4-1 rout for the La Liga leaders.

"Ronaldo was wonderful today, just wonderful. He was under a lot of pressure from the media, but he responded very well indeed ... We all knew his goals were going to start coming again," said Real Madrid striker Alvaro Morata.

Meanwhile, delighted Real Madrid coach Zinedine Zidane said, "It was only a matter of time before Ronaldo started helping the team again ... I am really pleased with what he has done for us today."

Legia Warsaw might not be quite so pleased with Ronaldo's resurgence given that they are the next team in his crosshairs in Group F of the Champions League.

To make matters even worse for the Polish champions, the game will be played behind closed doors because of bad behavior in previous games by Legia fans.

The Whites currently share the top spot in the group with Borussia Dortmund, both with seven points from three games.

Ronaldo, 31, is just five goals away from becoming the first player to notch 100 goals in the Champions League.

He is well out on top of the Champions League all-time top scorers list, with 95 goals to his name compared to 89 goals from arch-rival Lionel Messi of Barcelona.

Ronaldo is keen to reach the one hundred mark with the three games left in the group stage. By doing so, he would leave himself well placed to regain the prestigious Ballon d'Or award, which Messi took back from him 10 months ago.

He has banged in an astonishing total of 265 goals in just 243 matches in all competitions, making him the club's all-time top scorer, ahead of heavyweights such as Raul and Alfredo di Stefano - both of whom played for more years in the famous white shirt than Ronaldo.

In addition, he has guided Real Madrid to two Champions triumphs, scoring in the 4-1 defeat of neighbors Atletico Madrid in the 2014 finals - and calmly slotting home the winning penalty in the shootout against luckless Atletico in the 2016 final.

Little wonder, then, that Real are reportedly poised to extend Ronaldo's contract to 2022 - when he will be the ripe old age of 37 - with a salary increase which will keep him as the best-paid player at the Estadio Bernabeu. "I really think my contract should be extended to 2025, not 2022," Ronaldo said recently.

"The way I feel now, I really think I can continue playing until the age of 40."

Ronaldo can no longer make those unstoppable 40-metre dashes of yesteryear, and nowadays does not drift out to the left wing as often as he did before.

However, he is just as effective inside the penalty area as he ever was, now that he has fully recovered from the left knee injury suffered in the Euro 2016 final.

"Ronaldo is obviously not as quick physically as he used to be," commented Madrid radio station Cadena SER.

"But he is just as quick mentally as he ever was - and just as lethal in front of goal."
RELATED TOPICS