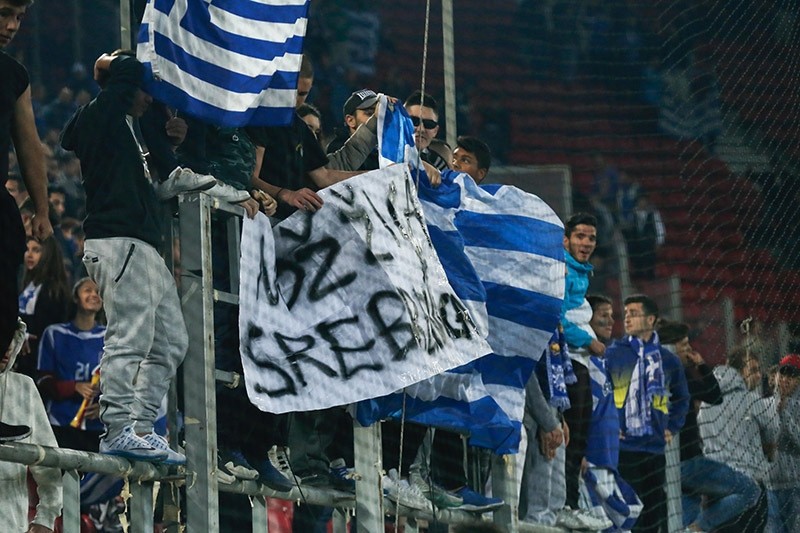 Greece soccer officials have apologized to the people of Bosnia-Herzegovina after a fan's banner referred to the Srebrenica massacre at a World Cup qualifying match.

In a statement Monday, the Greek soccer federation condemned the "unacceptable posting of a banner with fascist content ... which it condemns in the most absolute and categorical way."

A banner with the slogan "Noz, zica, Srebrenica" ("Knife, wire, Srebrenica" in Serbian) was displayed among Greece fans during the teams' 1-1 draw in Athens on Sunday.

In 1995, more than 8,000 Bosnian Muslim men and boys were killed in Srebrenica by ethnic Serb forces during a four-year war after the break-up of Yugoslavia. International courts said the killings were genocide.

The banner "insults in the most abhorrent way the sporting spirit of football and Greek hospitality," the federation said.

FIFA is expected to open a disciplinary case and charge the Greek federation for breaching rules prohibiting offensive and political statements in stadiums.

"We are in the process of analyzing the different match officials' reports and gathering all the necessary information," FIFA said on Monday.

Many Greeks feel traditional ties with Serbia because of their shared Orthodox religion, and the game was played in a tense atmosphere after reported attacks on Bosnian fans around the stadium.

Fireworks were lit in the stadium by both sets of fans, and both teams ended the game with 10 men after each had a player sent off. Bosnian forward Edin Dzeko was shown a red card after a clash with Greece players during which he pulled down the shorts of an opponent.

Greece earned the draw by scoring in the final minute of stoppage time and is in second place in the six-team Group H, which is led by Belgium. Bosnia-Herzegovina is third.

The return match is scheduled for June 9 in Zenica.