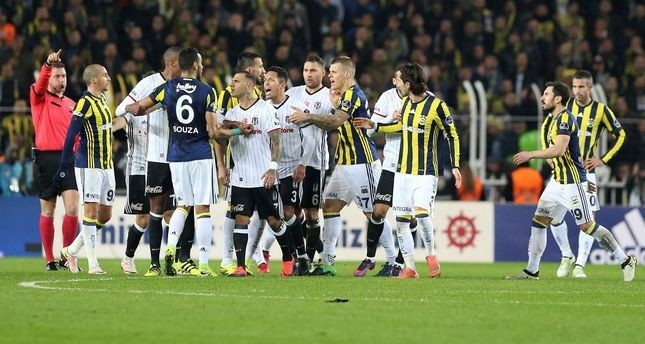 The derby at Ulker Stadium Şükrü Saraçoğlu Sport Complex lacked any tempo as the city rivals were unable to record any shots on target the entire game.

Kjaer, Alper from hosts Fenerbahçe and Quaresma, Tosic, and Necip from visitors Beşiktaş were given the yellow card.

In another game earlier Saturday, Medipol Başakşehir managed to save top spot in the league despite losing two points at home in 2-2 draw with with Antalyaspor.

After derby draw, Beşiktaş and Fenerbahçe maintained the gap and remained in the second and third places, respectively.

Despite their heated battle against the Yellow Canaries, the Eagles didn't forget about the players of Brazilian team Chapecoense Real, who lost their lives after their plane crashed in the mountains in Colombia while they were on their way to the finals of the Copa Sudamericana.

Beşiktaş paid tribute to the team before the match with their specially-designed warm-up jerseys with the emblem of Chapecoense on the back. Their T-shirts read: "In grief and agony... We always stand together."

Fenerbahçe and Beşiktaş also observed a minute of silence in memory of the victims of the crash before the derby.