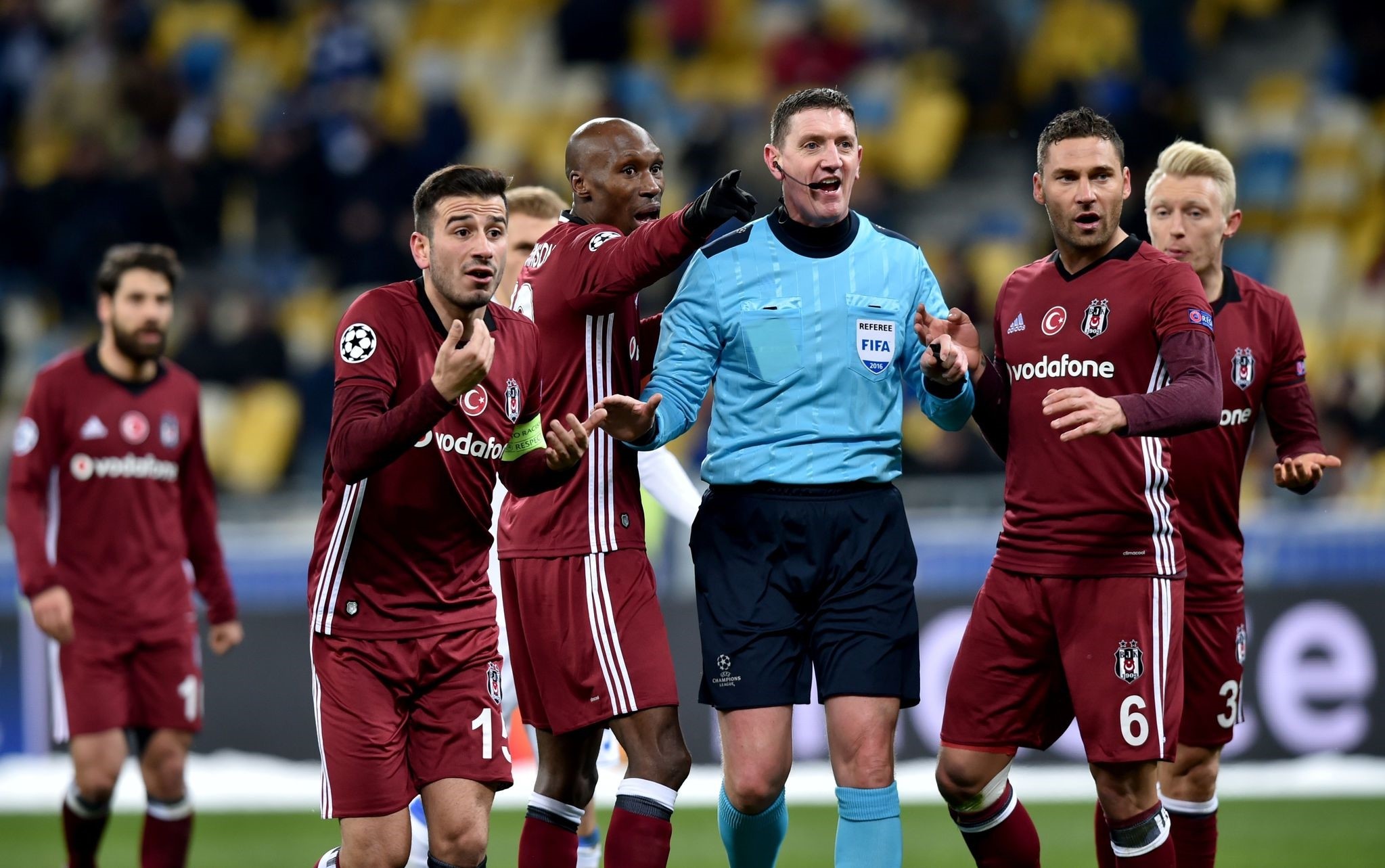 On a cold Tuesday night, Beşiktaş took a nosedive in the UEFA Champions League with a 6-0 defeat against Dynamo Kiev of Ukraine. An ‘unfair' referee and the low morale of the underperforming team have been blamed for the mauling

Beşiktaş's journey in the UEFA Champions League came to an unexpected end on Tuesday night as the Black Eagles lost 6-0 to Ukrainian rivals Dynamo Kiev, relegating the team to the Europa League.

The match's referee Craig Thomson took the rap from the Turkish side's fans for what they called unfair treatment of the team that reduced Beşiktaş to nine men by the end of the game in Kiev.

The game turned on a controversial incident in the 29th minute when Beşiktaş defender Andreas Beck was sent off after being judged to have fouled Derlis Gonzalez and Dynamo converted the penalty to go 2-0 ahead. Beşiktaş would have gone through with a win but instead finished third in Group B, one point behind Benfica who lost 2-1 at home to Napoli. The Ukrainian champions broke through after nine minutes when a quickly taken throw-in sent Andriy Yarmolenko racing down the right and his cross was turned in by Artem Besedin.

Beşiktaş came back strongly and Ricardo Quaresma and Vincent Aboubakar both went close but it all fell apart when Beck and Gonzalez collided in the penalty area as they both chased Yarmolenko's through ball.

The referee awarded a penalty, sent off Beck and Yarmolenko stroked home the penalty to completely change the face of the game. Vitaly Buyalskiy added another two minutes later when he sidefooted the ball in from the edge of the area after Beşiktaş failed to clear. Beşiktaş had come from 3-0 down to draw 3-3 with Benfica in their previous game but there was no such comeback this time and Gonzalez scored the fourth with a deflected shot in first-half stoppage time. It got even worse for the visitors when Aboubakar was sent off for a second bookable offence before Serhiy Sydorchuk added a fifth on the hour after Beşiktaş lost possession. Junior Moraes completed Beşiktaş's misery when he scored the sixth with a simple finish, less than one minute after coming on as a substitute.

The Beşiktaş fans expressed outrage over Scottish referee Craig Thomson's handling of the match. Thomson was the target of their fury for sending off Andreas Beck, who thought the card was originally for the rival team, according to Turkish media. Beck hit the ground after a slight collision with Gonzalez. The Eagles' supporters were also outraged on social media after Thomson sent off Vincent Aboubakar, already on a yellow card, after the Cameroonian striker unwittingly sent a loose ball away in a fit of rage against the referee.

Eagles coach Şenol Güneş described the game as "nightmarish" though he was restrained in his criticism of the referee. "We did not deserve this score," Güneş said in a post-match press conference. Usually calm, Güneş said it was not right for him "to use harsh words" and he preferred to remain silent although he pointed to past penalty shots awarded to team's rivals by foreign referees. "It was a night of nightmares and you'll know what I mean if you watched the decisions (of the referee)," Güneş said. The Turkish coach, however, was also apologetic and said he was solely responsible for the defeat. "One year of effort was wasted. We need to recover. We failed but I cannot blame any player," Güneş said. The coach added that the team should avoid "unnecessary mistakes" and losing control.

The match was also marred by fan violence. Several Beşiktaş fans clashing with rival team's supporters were injured in the incidents outside the stadium before and during the match. Some Beşiktaş fans were stabbed and one was in intensive care, according to Doğan News Agency (DHA). Speaking to DHA, Beşiktaş supporter Cüneyt Gacan said they were about to be seated when a Dynamo Kiev fan punched one in their group of four supporters. "Then, others started kicking that friend who fell after being punched. We took him away but other (Dynamo Kiev fans) arrived with sticks and hit us. One of them stabbed one of our friends," Gacan said. He claimed Ukrainian police "did nothing to stop attackers."
RELATED TOPICS