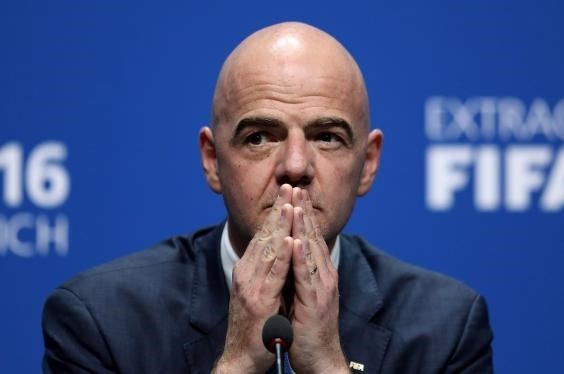 FIFA President Gianni Infantino was elected in February on a campaign promise to add eight nations for a 40-team World Cup. He then suggested 48 teams with an opening playoff round that would send 16 teams home after one game.
by Dec 16, 2016 12:00 am

FIFA has found a difficult opponent to President Gianni Infantino's plan to expand the World Cup to 48 teams. A group of 220 of Europe's top clubs called on Infantino not to increase the tournament from its 32-team format

Europe's powerful football clubs have told football governing body FIFA that they are opposed to plans to expand the World Cup from its current 32 teams. Gianni Infantino, the president of the FIFA Council, has said he wants to increase the quadrennial tournament to 48 teams from 2026 and the FIFA Council is expected to reach a decision at its next meeting in January. However, the European Club Association (ECA), itself criticised recently over recent changes to the Champions League, said it was against any expansion.

"The number of games being played throughout the year has already reached an unacceptable level, in particular for national team players," said an ECA statement. "The ECA Executive Board therefore rejects such initiative and has today sent a letter to Gianni Infantino calling on FIFA not to increase the number of participants at future World Cups."

ECA chairman Karl-Heinz Rummenigge added: "We have to focus on the sport again. Politics and commerce should not be the exclusive priority in football.

"In the interest of the fans and the players, we urge FIFA not to increase the number of world cup participants."

The ECA represents more than 200 clubs across the continent although it is dominated by the big clubs who have greater voting rights within the organisation than their smaller counterparts. Earlier this year, the ECA supported controversial changes to the Champions League club competition which critics said put finance before football.

UEFA rearranged the group-stage slots in favour of its four top-ranked leagues - Spain, England, Germany and Italy - by guaranteeing them four places each.Places for the winners of the 11th and 12th ranked leagues were cut and the number of places reserved for teams from the remaining leagues, who play their way through a qualifying competition, was reduced from five to four. UEFA's decision to create a subsidiary to manage its European club competitions also raised fears that power was being handed over to the big clubs.

According to UEFA, the subsidiary will have an equal number of managing directors from UEFA and ECA, who each appoint half of the senior representatives on the board of the company. The FIFA Council will consider four possible formats for the World Cup when it meets in January. The first possibility is to keep the current 32-team format with eight groups of four following by a knockout contest.A second option would be for a 40-team tournament with either eight groups of five or 10 groups of four.

The third choice is for a 48-team tournament consisting of a preliminary round of 16 knockout ties with the winners joining 16 more teams in a 32-team group stage.

The fourth proposal, currently favoured by Infantino, is for 48 teams divided into 16 groups of three.