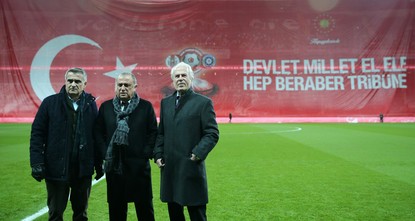 Fatih Terim, u015eenol Gu00fcneu015f and Mustafa Denizli gather in Vodafone Arena before the solidarity match against terror. (AA Photo)
by Daily Sabah with AA Dec 22, 2016 12:00 am

A charity match at Istanbul’s Vodafone Arena located next to the site of a recent terror attack garnered around TL 50 million for terror victims. A stellar line-up of Turkish and foreign players competed in the match kicked off by President Recep Tayyip Erdoğan

Istanbul's Vodafone Arena, home to the "Black Eagles" Beşiktaş, hosted a charity match on Thursday night for the benefit of terror victims.

President Recep Tayyip Erdoğan kicked off the "Respect to Martyrs" event where Turkish and international players showed off their skills for the charity event that collected some TL 50 million ($14.24 million) in aid for the victims in the attack that took place right next to the stadium killing 45 people.

The Vodafone Arena was adorned with Turkish flags in a patriotic display for the match. On Dec. 10, just a few hundred meters away from the stadium, a suicide car bomb claimed the lives of riot police officers and civilians and was followed by a suicide bombing in the nearby Maçka Park that killed five police officers.

The Beşiktaş football club also lost an employee, a merchandise store clerk, in the bombings that was the latest in a string of large-scale terror attacks targeting Turkey this year.

A large crowd of spectators was in the stadium overlooking the Bosporus while prominent sports personalities, ministers and celebrities attended a ceremony before the match. An imam recited verses from the Quran, in a solemn tribute to the terror victims.

The match, announced earlier this week at a meeting of club presidents and sports officials, was primarily a display of unity against terrorism and spectators reflected this in the stadium. Donning jerseys of their teams, bitter rivals Fenerbahçe, Galatasaray, Beşiktaş and Trabzonspor, fans sat together watching a mix of players from their respective teams on the pitch.

Addressing the crowd before the match, President Recep Tayyip Erdoğan said Turkey was going through a difficult period in its anti-terror efforts. "There were two vicious attacks two weeks ago, right here next to this stadium and we lost 14 soldiers in another attack in Kayseri last week," he said.

Erdoğan said Turkey had many terror victims over the past one and a half year, but he believed the Turkish nation, "our police, soldiers" will wipe out the terrorism by being united.

"We are one nation (regardless of ethnicity) and they will pay the price for what they've done," Erdoğan said, referring to terrorists. The president also thanked clubs and players for the "meaningful" match that became "a symbol of unity and togetherness."

The president then joined players on the pitch for a photoshoot after shaking hands with the on duty police officers. He later passed the ball to Antalyaspor's Samuel Eto'o to kick off the match.

The game's organizers announced they received more than TL 50 million in donations, which would be handed out to the Family and Social Policies Ministry overseeing the aid and assistance to the families of terror victims. Eighteen football clubs also donated TL 5 million for terror victims.

Two bombs -- one by a bomb-laden car and the other a suicide bomb -- exploded in a terrorist attack that occurred in Istanbul's Maçka Park outside Beşiktaş's stadium, Vodafone Arena, on December 10, killing 44 people and wounding 155, including 14 still in intensive care.