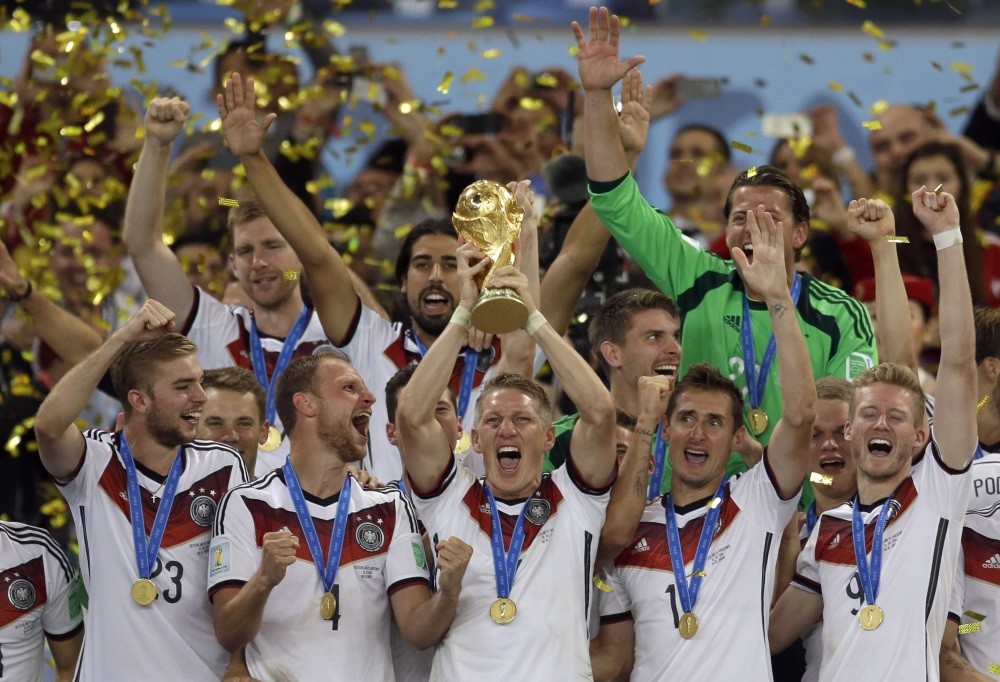 Germanyu2019s Bastian Schweinsteiger holds up the 2014 World Cup trophy as the team celebrates their 1-0 victor over Argentina after the World Cup final match between Germany and Argentina at the Maracana Stadium in Rio de Janeiro.
by French Press Agency - AFP
Jan 13, 2017 12:00 am

With Asia and Europe sidelined, and South America eyeing a joint bid between neighbors Argentina and Uruguay in 2030 to commemorate the competition's 100th anniversary, North America are firmly in the hunt

FIFA's decision to expand the World Cup to 48 teams starting with the 2026 tournament prompted one major question: who can host the global showpiece in its revamped format?North America is the favorite and in pole position with other former candidates relegated to outsiders. Several harbor ambitions of organizing the 2026 World Cup but certain constraints limit the numbers.

While the format for the finals faces an overhaul - 16 groups of three before the last 32 - the basic framework will remain similar, with a 32-day timeframe and 12 venues, assured FIFA chief Gianni Infantino, the man behind the reform. The main limitation will be the choice of host countries, with the winning bid to be revealed in May 2020, taking into account FIFA's rotation principle - it said in October the hosts of the 2026 edition would come from different confederations to those hosting the 2018 and 2022 events, effectively excluding Europe (Russia) and Asia (Qatar).

However, a European nation could still be selected "in the case that none of the received bids meet the technical and financial demands," the FIFA Council added. China President Xi Jinping's vision of transforming the country into one of the game's superpowers includes the goal of hosting and one day winning the World Cup, but it too will have to wait its turn. With Asia and Europe sidelined, and South America eyeing a joint bid between neighbors Argentina and Uruguay in 2030 to commemorate the competition's 100th anniversary, North America are firmly in the hunt. With co-hosting a recent admission, and even encouraged by Infantino, a tandem or tri-nation bid (U.S., Mexico and Canada) "is a possibility," CONCACAF chief Victor Montagliani confirmed.

Also playing in their favor is the fact the World Cup hasn't visited the North and Central America region since the U.S. hosted the 1994 tournament, while the three countries in question already boast the required infrastructures. The U.S. fell short in their attempt to land the 2022 showpiece controversially awarded to Qatar, but has since made it known they would be interested in staging the 2026 finals. However, Donald Trump's election as U.S. president could make negotiating a joint bid trickier after angering Mexicans with his anti-immigrant rhetoric. But other failed 2018 and 2022 contenders appear out of the running due to FIFA's desire to rotate between continents - removing England, Portugal-Spain, Belgium-Netherlands, South Korea and Japan from the equation.

Whether the same applies to Australia is another point of contention. The Socceroos have established themselves as a force in Asia since leaving Oceania in 2006 and on that basis would also be ineligible. But geographically speaking, Oceania is the only continent yet to welcome to the World Cup to its shores. Morocco is also an option. Overlooked on four occasions (1994, 1998, 2006, 2010) it looks the lone feasible African candidate with South Africa having played host to the 2010 World Cup.

In November Infantino said Morocco had "all the resources to host a World Cup," but it still has issues with the number of suitable venues and the repercussions of backing out from hosting the 2015 Africa Cup of Nations over Ebola fears.