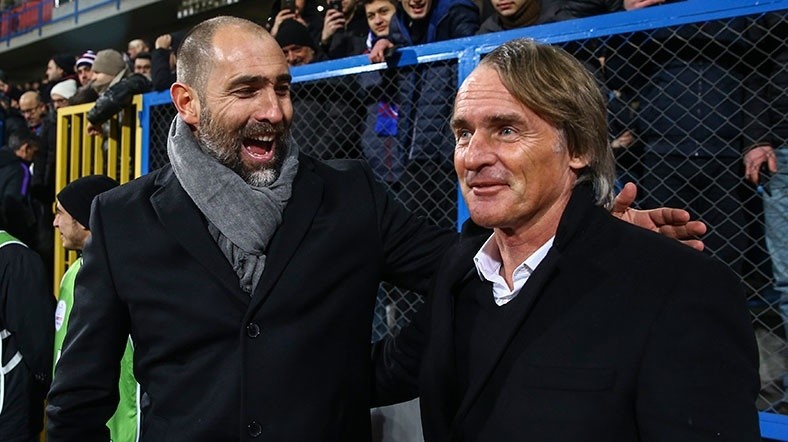 Galatasaray manager Jan Olde Riekerink was sacked following a shock weekend league loss, while the club's board replaced him with Igor Tudor of Karabükspor

Less than a year after he took the job, Jan Olde Riekerink has been sacked as the head coach of Galatasaray after a surprising defeat to Anatolian minnows Kayserispor.

The club's president, Dursun Özbek announced on Tuesday after a 3-hour board meeting at Türk Telekom Arena in Istanbul that they were parting their ways with Riekerink for "Galatasaray's success."

A formal board meeting made the final decision concerning Riekerink, replacing him by Igor Tudor, the young Croatian coach of Kardemir Karabükspor.

Galatasaray's top executives decided to hold the emergency meeting about the Dutchman's future following the 2-1 home defeat to Kayserispor on Sunday. The defeat left Galatasaray in third place in the Super League behind leaders Beşiktaş and surprise package Başakşehir.

Only a victory in the league will satisfy Galatasaray's management, which has assembled a team packed with stars including Germany's Lukas Podolski and Wesley Sneijder of the Netherlands.

Riekerink had told earlier the Fanatik daily that he had not been informed of the discussions about his future.

"It would be normal if the decision taken at that meeting was discussed with me first," he said. Meanwhile, Kardemir Karabükspor were apparently unaware that Galatasaray are after their coach, who was abroad when he made the headlines as the potential replacement for the Dutch coach. Club chairman Ferudun Tankut said it would be "unethical" if Galatasaray contacted Tudor without informing them first, although the club acknowledged that Galatasaray needed only to pay a small sum to transfer Tudor without breaching his contract with Karabükspor.

The Super League is notorious for its revolving door of managerial jobs but the situation at Galatasaray has been extreme even by local standards.

Tudor, the successor to Riekerink has been the sixth manager to take charge of the club since 2014. He has also been the third coach since the current president Dursun Özbek, a tourism magnate, took charge of the club, which has struggled to revive its past glory in European tournaments. Özbek and his board started out with Hamza Hamzaoğlu and then moved to Mustafa Denizli, a former coach, before settling on Riekerink who took the job in March 2016.

Riekerink was coaching a Galatasaray youth team when he rose to the rank of manager and proved his mettle by helping the Lions secure the top domestic titles. Although Riekerink was considered a temporary name before the team went ahead with a more prominent coach, the club decided to hire him on a more or less permanent basis, though the Turkish league is not known for hiring a foreign coach for a long time. After initial success, Galatasaray succumbed to a streak of defeats in the first half of this season, leading to fans' reaction that culminated in the constant booing of Riekerink during last weekend's home game. Dursun Özbek dismissed the defeat as a loss "in a marathon."

Özbek had earlier denied that the executive board discussed a replacement. "We learn our lessons and we will never fall into despair. Of course, we cannot ignore the reaction of the fans," Özbek had told reporters early Tuesday. "We cannot make decisions that will affect Galatasaray's success and we have to think carefully," he said.