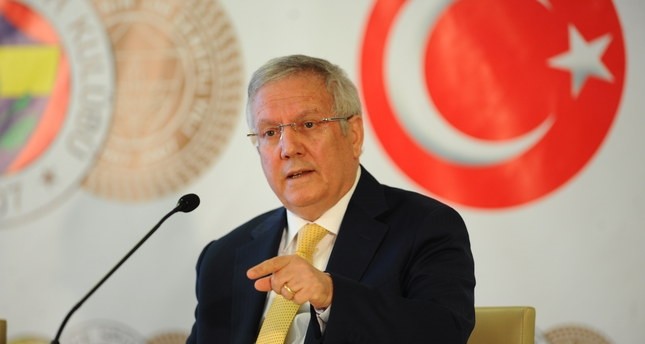 The trial against the FETÖ for jailing soccer bosses over match-fixing allegations opens today in Istanbul, where leader Fetullah Gülen and others face charges of plotting to imprison Fenerbahçe boss Aziz Yıldırım

Years after he was jailed for match-fixing, Fenerbahçe's long-standing president Aziz Yıldırım may finally get relief by seeing the "conspirators" against him punished.

The Gülenist Terror Group (FETÖ), which faces a barrage of trials elsewhere for a vast array of crimes, now faces charges of plotting to imprison Fener's Yıldırım and other renowned sports executives, apparently with the purpose of spreading its clout into the country's sports world.

In a courtroom inside a maximum-security prison compound in Istanbul's Silivri district, 108 defendants will attend the first hearing of the trial, while Fetullah Gülen, the prime suspect in the case, will be tried in absentia as he refuses to return to Turkey from the U.S. where he lives in a mansion retreat.

Only 15 defendants remain in custody while the rest have either been released pending trial or remain at large.

Most of the defendants are not directly linked to the sports scandal while plaintiffs, apart from Yıldırım, include the presidents of Eskişehirspor, Sivasspor and Trabzonspor, as well as several coaches and soccer players.

Prosecutors accuse Gülen, the recently shut-down Gülenist media group, and a number of academics in senior positions for the plot, while former police chiefs, prosecutors and judges will also be tried in connection to the attempted takeover.

"FETÖ fiddled with me back in 1998 when I was elected president. A few months later some men from FETÖ's media organizations visited me and asked for my help in cases against Fetullah Gülen. I said I did not know Gülen and that I would not be of help to him. That's why they wanted to arrest me and capture Fenerbahçe," Aziz Yıldırım previously said in a televised interview in August.

This is not the first case where FETÖ, thanks to its infiltrators within the country's judiciary and law enforcement, is accused of tampering with or fabricating evidence it in order to imprison its critics or anyone they deemed an obstacle to their power.

Fugitive judges, prosecutors and police chiefs had generals, journalists, academics and other prominent figures jailed in a string of cases in the past years in sham trials. Hundreds were arrested, only to be acquitted years later, after FETÖ's attempt to seize power by imprisoning government members was foiled in 2013.

The indictment in the case says İhsan Kalkavan, a businessman and former executive at the Beşiktaş football club, helped FETÖ gain a foothold in Turkish sports. Following a meeting of senior FETÖ figures, they decided to eliminate Yıldırım, a fixture in Turkish sports since the 1990s as head of Fenerbahçe, one of the three major clubs in the Turkish football.

Later, FETÖ-linked prosecutors who handled a case of match-fixing involving a small club, included Fenerbahçe and other major clubs in the case to justify the illegal wiretapping of the plaintiffs. Eventually, Yıldırım and others were jailed on charges of widespread match-fixing during the 2011-2012 season, though he was released pending trial in 2014, after a year of detention. The defendants were acquitted in 2015 on charges of match-fixing. Throughout the trial, Yıldırım maintained his innocence and claimed that evidence including wiretapped conversations allegedly revealing match-fixing deals were "faked."

The match-fixing trial was the culmination of an investigation by the now fugitive prosecutor Zekeriya Öz. Öz remains at large after an investigation into FETÖ led to the issuing of arrest warrants for him and another prosecutor linked to FETÖ's wrongdoings.

Defendants in the case face prison terms of up to 85 years for illegal wiretapping, violation of privacy, forgery of official documents and running a criminal organization.

The whereabouts of the defendants are not known, except for those of Gülen and Şerif Ali Tekalan, former president of Fatih University, a university run by FETÖ.

Like Gülen, Tekalan resides in the United States and was recently appointed to run a school in Texas. Meanwhile, Mehmet Ekinci, who ordered the imprisonment of defendants in the match-fixing case, was recently captured in Yalova, a city south of Istanbul.
Last Update: Feb 20, 2017 11:02 am
RELATED TOPICS