Beşiktaş down Galatasaray to extend lead at top 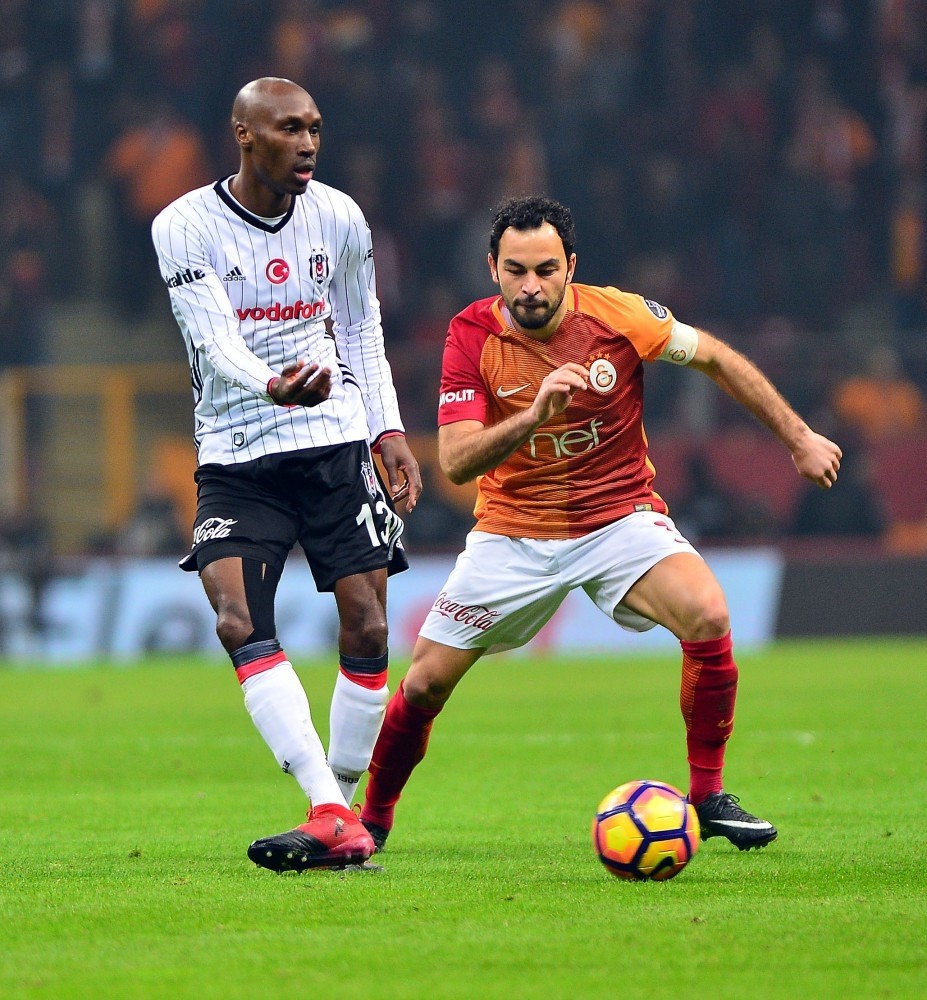 Galatasaray's Selu00e7uk u015eahin, right, vies for ball with Beu015fiktau015f's Anderson Talisca, left, during the Super League match at the Tu00fcrk Telekom Arena Stadium in Istanbul.
by Hakan Baş Mar 01, 2017 12:00 am

With a 1-0 away win against Galatasaray on Monday, the Black Eagles have further extended their lead at the top, sending Fenerbahçe and Galatasaray adrift by 12 and 10 points respectively

Title-holders Beşiktaş have proven their credentials once more on Monday as they handed city-rivals Galatasaray a 1-0 home defeat.

Football fans gathered around their TV sets, hoping to witness another classic battle in Turkish football, as two giants, Galatasaray and Beşiktaş, faced each other for their second league bout this season.

The match was more critical for the Lions than for Beşiktaş, as a win for the former could help them close the point gap with their rivals to just four. It was also the first serious test for Galatasaray's newly-appointed coach Igor Tudor and possibly their last real opportunity to catch up with leaders Beşiktaş.

However, Galatasaray missed out on the crucial opportunity at home, losing 1-0 in the Spor Toto Super League derby clash. Meanwhile, bagging three more crucial points Beşiktaş extended their lead at the top of the table.

The Black Eagles started the match at Galatasaray's Türk Telekom Arena at a controlled pace, but the home side was the more attacking outfit, with contributions from the speedy winger Armindo Bruma and German striker Lukas Podolski.

However, Galatasaray wasted too many chances and the Lions were unable to find the net on several occasions.

With Monday's important derby victory, Beşiktaş increased their points haul to 50 and they continue their reign at the top, four points ahead of second-placed Medipol Başakşehir. Galatasaray, meanwhile, remain in third a ways back with 40 points.

Despite the lead, Beşiktaş spokesperson Metin Albayrak objected to calling his team league champions, pointing out that Medipol Başakşehir must be taken seriously.

"Medipol Başakşehir are being treated unfairly. They have 46 points and are also in the title race. We respect them just like we respect every other team," the spokesman said.

Meanwhile, Beşiktaş coach Şenol Güneş said, "I congratulate my players. They deserved the win. However, it was only a league match. It was not the last match and we haven't guaranteed the championship yet. The race is still on. I think Medipol Başakşehir are also in the title race and in my opinion, they are the best team this season."

On the other hand, Galatasaray coach Tudor also touched upon the game, saying, "We lost due to a chance goal from a free-kick. There is a 10-point gap with Beşiktaş, but we have still 12 matches left. The game should have finished in a draw. We did not deserve to lose."

Anderson Talisca has played an important role in Beşiktaş's success this season. The 23-year-old helped his team win with some critical goals. As of gameweek 22, in 12 matches he has scored seven Super League goals, helping Beşiktaş bag seven wins and one draw.

Earlier on Sunday, second-placed Medipol Başakşehir beat Osmanlıspor 1-0 in Ankara to take their tally to 46. On the same day, Fenerbahçe failed to end their run of poor performances and dropped two more points, as they drew 1-1 with bottom-dwellers Gaziantepspor.
RELATED TOPICS