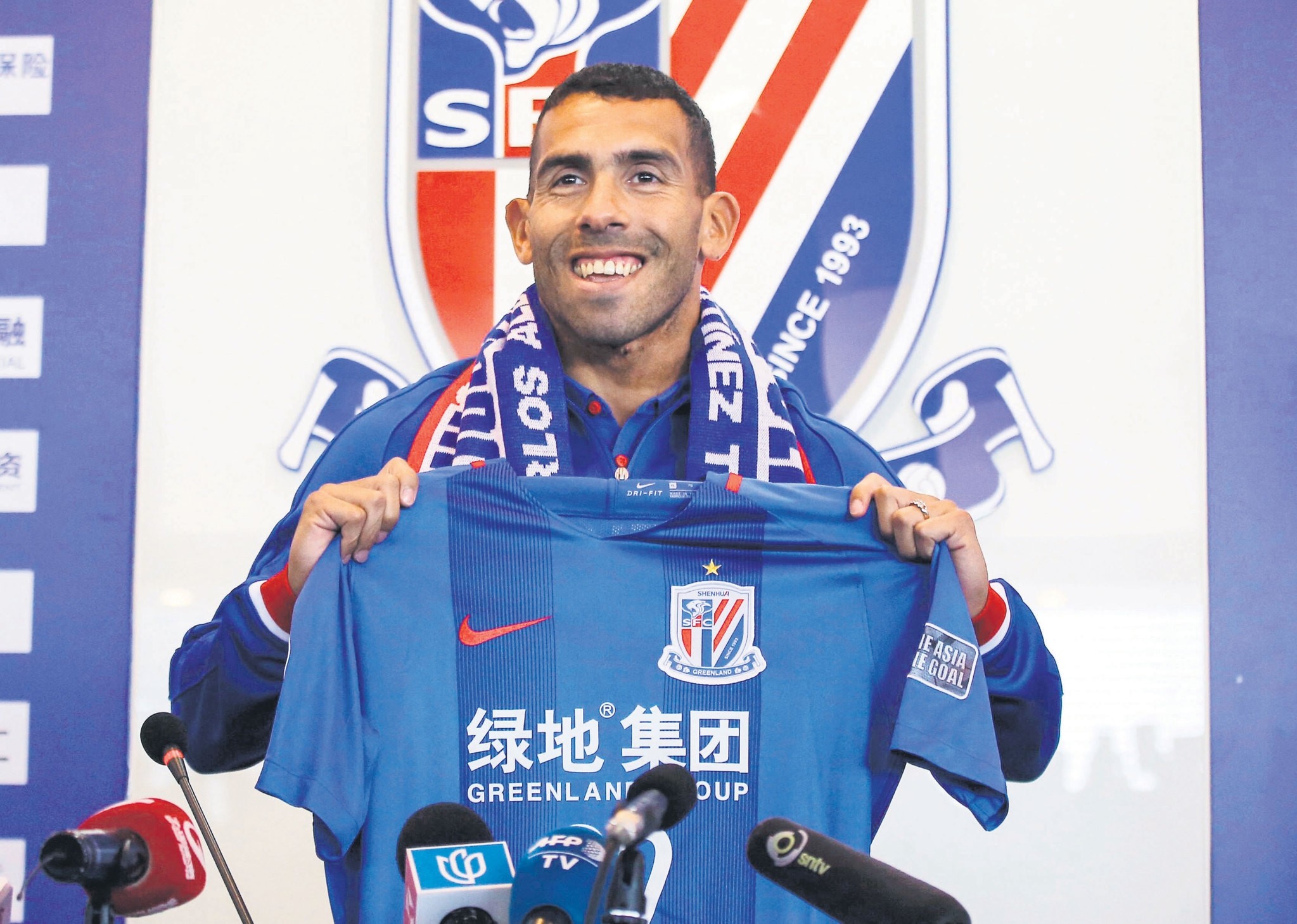 The Chinese Super League will take another step toward global recognition when it returns this week, boasting some of the world's best-paid players and a growing audience including live broadcasts in Britain

When Argentina's Carlos Tevez makes his league debut for Shanghai Shenhua, fans from Liaoning to Liverpool can tune in to see what can be bought with reported world-record wages of 730,000 euros ($768,000) a week. The 33-year-old former Manchester United, Manchester City and Juventus striker isn't the only player reaping the benefits of the CSL's rapid transformation from corruption-addled infamy into one of the world's biggest spending leagues. Oscar, 25, is reportedly banking 466,000 euros a week with Shanghai SIPG, which would put him second on football's wages list, behind Tevez but above the likes of Cristiano Ronaldo and Lionel Messi. It is quite a turnaround for the Brazilian midfielder, who had fallen out of favour at Chelsea before SIPG swooped with an offer of 60 million euros, the fifth new Asian transfer record set by Chinese clubs in less than a year.

Despite an official crackdown on transfer fees and wages, and a cut in the number of foreign players allowed, Super League clubs spent a record 396 million euros in the January-February transfer window, outstripping the English Premier League. The lavish spending has prompted feverish speculation about who will be next, and it would be no surprise to see England captain Wayne Rooney, 31, heading east for a late-career payday next season.

Rich Chinese clubs are an increasing force on the continental stage, with Guangzhou Evergrande, Jiangsu Suning and SIPG dropping points in only one game between them in the first two rounds of this year's AFC Champions League play. China's top tier became the fifth biggest-spending league worldwide last year but whether the CSL, which is also broadcast in Brazil and various countries in Asia, can live up to the hype is another matter. Quality remains patchy and despite a wide-ranging corruption purge which jailed senior officials and players in 2012, and ensnared dozens more, suspicions remain.

Hong Kong's horse racing and football gambling monopoly, the Jockey Club, said last year that it had no plans to offer betting on the Super League, citing concerns over its "information transparency, integrity and competitiveness".

However, there's no doubt the imported players who are now flooding into China - also including Alex Teixeira, Hulk, Ramires and Graziano Pelle - are having an impact. Andre Villas-Boas at SIPG and Fabio Cannavaro, with newly promoted Tianjin Quanjian, have also swelled the ranks of foreign managers, joining Evergrande's Luiz Felipe Scolari and Felix Magath at Shandong Luneng.

The big question for Chinese fans is whether anyone can halt Scolari's Evergrande, who have won the last six CSL titles and collected two Asian trophies along the way. SIPG, led by former Chelsea and Tottenham Hotspur boss Villas-Boas, and featuring Oscar, Hulk and another Brazilian, the prolific Elkeson, look like leading contenders. Jiangsu Suning, who share owners with Inter Milan and have Brazilians Teixeira, Ramires and Jo in their ranks, should also have a say in the title race.
RELATED TOPICS