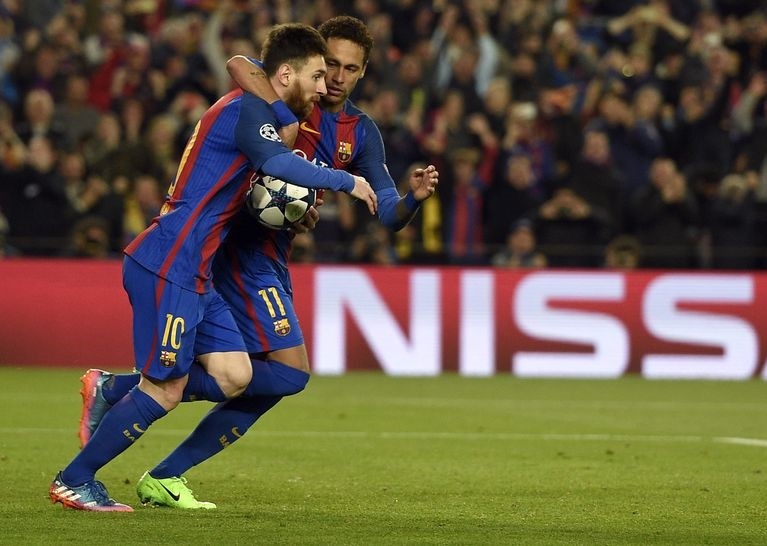 Sergi Roberto scored in the fifth minute of stoppage time as Barcelona capped a sensational Champions League fightback to thrash Paris Saint-Germain 6-1 and reach the quarter-finals on Wednesday.

Despite Luis Suarez's early opener, a Layvin Kurzawa own goal and Lionel Messi's penalty, Barca, who lost the first leg 4-0, looked down and out when Edison Cavani volleyed home what seemed to be the vital away goal for PSG.

However, Neymar restored Barca's belief as he firstly fired home a sensational free-kick two minutes from time and then converted from the penalty spot.

And Roberto capped the biggest comeback in Champions League history when he stretched to turn home Neymar's dinked cross to the delight of a near 100,000 at a rocking Camp Nou, making the score 6-5 on aggregate.

Barca also enter the record books by reaching the quarter-finals for a 10th straight season.

Outgoing Barca coach Luis Enrique warned the French champions on Tuesday that his side were capable of scoring six and they needed the full 95 minutes to pull of a miracle revival.

No side had ever come back from a 4-0 first leg deficit in the Champions League, but after much pre-match hype of a historic turnaround, Barca truly believed when Suarez opened the scoring after just three minutes.

The PSG defence was stationary as Marquinhos headed Rafinha's cross high into the air and Suarez nipped in ahead of the flapping goalkeeper Kevin Trapp to nod in despite Thomas Meunier's best efforts to clear off the line.

In a role reversal from the first leg, Barca's high pressing wasn't allowing the visitors any restbite, whilst PSG failed to take advantage of the huge spaces in behind the Barca defence on the counter-attack.

Neymar was inches away from delivering a spectacular second when he drilled just wide from well outside the area before Trapp easily collected a Suarez effort from an acute angle.

However, Barca's hopes were further raised five minutes before the break thanks to more shambolic PSG defending.

Andres Iniesta reached Suarez's hopeful through ball and his backheel provoked Kurzawa into shanking the ball into his own net on his weaker right foot.

The second period started just as the first ended as Barca edged closer to the history books when Neymar was clipped by the prone Meunier and, after consultation with one of his assistants, German referee Deniz Aytekin pointed to the spot.

Messi made no mistake with the penalty to rifle home his 11th Champions League goal of the season.

Only when 3-0 down did PSG begin to come out in search of the crucial away goal and were nearly rewarded immediately as Meunier got to the by-line and his low cross was turned onto the post by Cavani.

The Uruguayan had to wait just 10 minutes more, though, to find the net.

Kurzawa made amends for his earlier error by heading down a free-kick and Cavani connected sweetly on the volley to register his 38th and seemingly most important goal of the season.

PSG were then to rue to huge missed chances to put the tie completely beyond Barca.

Firstly, Cavani should have had his second as he was played in by Draxler, but this time Marc-Andre ter Stegen stood up to block with an outstretched leg.

PSG's two-goal hero from the first Angel di Maria had started on the bench, but the former Real Madrid man should have rubbed salt in Barca's wounds five minutes from time when he somehow skewed wide with just Ter Stegen to beat.

Just when Barca looked down and out Neymar restored hope when he curled home a sensational free-kick high into the top corner.

And as the match entered stoppage time, Barca were awarded a second controversial penalty when Suarez tumbled under a challenge form Marquinhos.

And the Brazilian also showed a cool head amongst a mad final minute when he cut inside before chipping into the box for substitute Roberto to extend his right leg just enough to beat Trapp and leave PSG floored.