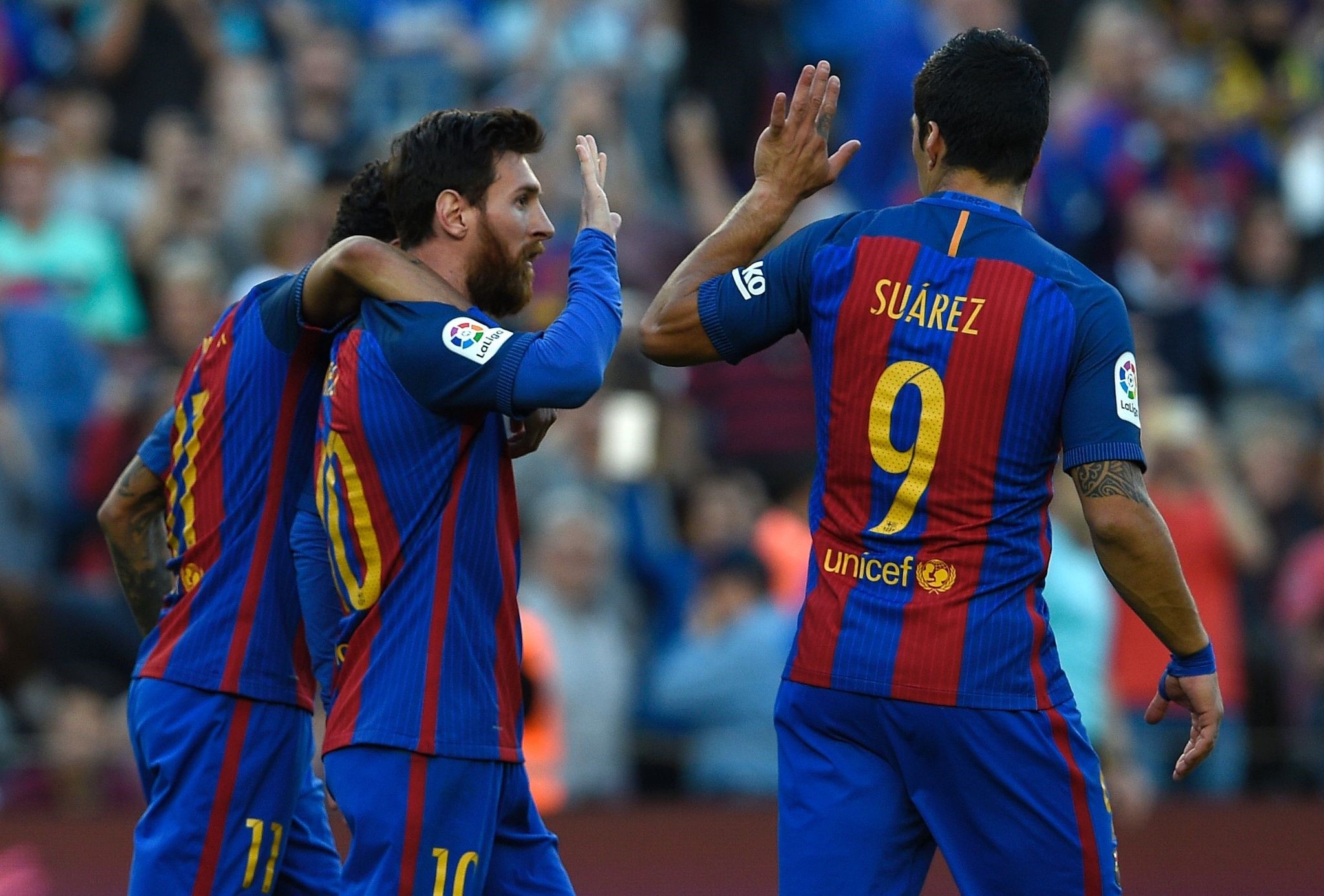 Messi (C) celebrates a goal with Luis Suarez (R) and Neymar during the Spanish league football match FC Barcelona vs Villarreal CF at the Camp Nou stadium.
by May 08, 2017 12:00 am
Alvaro Morata and James Rodriguez scored twice as a much-changed Real Madrid moved to within three victories of winning La Liga with a 4-0 demolition of Tony Adams's already-relegated Granada. Earlier, Neymar, Lionel Messi and Luis Suarez were all on target to take their combined tally for the season to 102 as Barcelona kept pace at the top with a 4-1 win over Villarreal. Barca remain top thanks to their superior head-to-head record with the two locked on 84 points, but Real have three games remaining to the Catalans' two.

Real coach Zinedine Zidane continued his rotation policy of recent weeks with nine changes from the side that beat Atletico Madrid 3-0 in the first leg of their Champions League semi-final on Tuesday as hat-trick hero Cristiano Ronaldo was left out of the squad entirely. However, it mattered little as Real maintained their perfect La Liga record in nine games without Ronaldo this season.

"For a coach it is the best possible news," said Zidane.

"It means that everyone is involved, in good physical condition, every time they get a chance to play they do well. I can only be satisfied with that."

Real had mercy on the hosts after the break, but now just need seven points from their last three games against Sevilla, Celta Vigo and Malaga to seal a first La Liga title in five years. Barca maintained the pressure on the European champions with all of their front three on top form against Villarreal.

"Any football fan should value what Neymar does," said Barca coach Luis Enrique.

"Often it seems much more like ballet than a football move. It is exceptional, beautiful, effective and spectacular."

Atletico guaranteed a top-four finish as Saul Niguez's winner 21 minutes from time earned a 1-0 win over Eibar. At the other end of the table Sporting Gijon kept their hopes of staying up alive with a 1-0 win over Las Palmas.
RELATED TOPICS