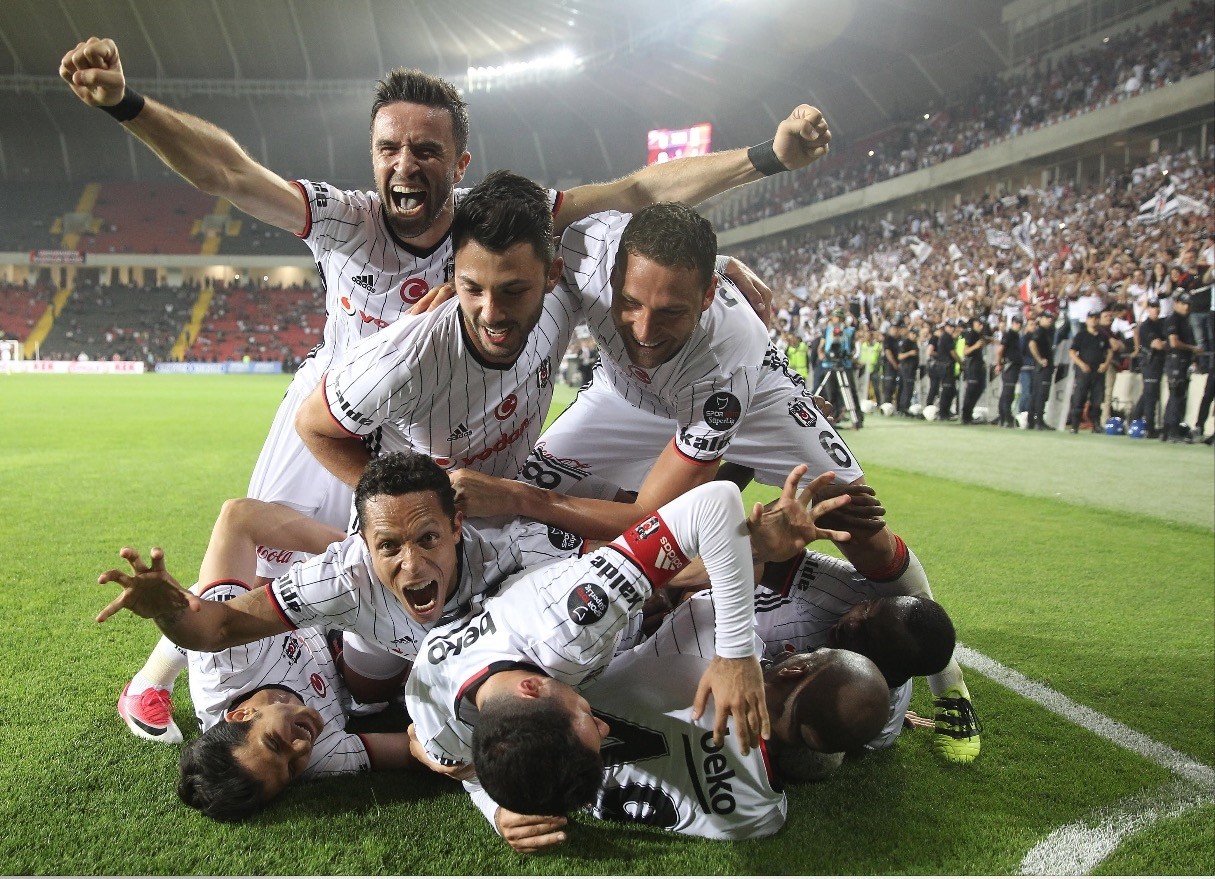 Beu015fiktau015f players celebrate winning the Super League championship after a match against Gaziantepspor on May 28.
by Hakan Baş Jun 03, 2017 12:00 am

After successfully defending the title, Beşiktaş will get their hands on the trophy this week after their match against Osmanlıspor. On the other hand, Fenerbahçe and Galatasaray will both be battling it out for third place while Bursaspor and Çaykur Rizespor will be looking to avoid relegation

Another season of Spor Toto Super League's is about to come to an end with Beşiktaş having already secured the title last week. The excitement, however, will continue as the last week is well poised for a few crucial ties.

Beşiktaş will take on Osmanlıspor as they will be appear in front of home fans for the first time since securing their 15th title, beating Gaziantep last Sunday.

The Black Eagles have claimed two successive titles since moving to the Vodafone Arena last April. But, Saturday's celebration will be special for Beşiktaş fans, since it will end their long to add a third star to their jersey.

Every five title win allows a team to add a star to their jersey. Beşiktaş archrivals, Galatasaray and Fenerbahçe, however, are well ahead of them. Galatasaray added their fourth star in 2015, while Fenerbahçe have been wearing a third star since 2001.

Beşiktaş, oldest yet the least decorated of the "big three" teams in Istanbul, will qualify directly for next year's Champions League. Meanwhile, Başakşehir, in second place, will have to play Champions League playoff matches during the summer.

The third place in the league however is still up for grabs and will set up for an exciting finish to the Super League. Current occupiers Fenerbahçe are ahead of archrivals Galatasaray by a two-goal-difference. Both team had a disappointing season and are now left scraping for European Cup spots with 5th-placed Antalyaspor off by some six points.

Fenerbahçe will travel to Adana and take on the already-relegated Adanaspor Saturday. At the same hour, Galatasaray will host the newly-crowned Ziraat Turkish Cup champions Atiker Konyaspor.

If Fenerbahçe drop points and Galatasaray win, the Lions will finish the season in the third spot, but, in case of wins for both of them, Fenerbahçe will keep their third spot.

Atiker Konyaspor, on the other hand, will be going straight to the Europa League group stages after they beat Basaksehir in the Turkish Cup Final Wednesday.

However, the most exciting matches will be played out by Bursaspor and Çaykur Rizespor as both grapple to stay in the Super League Saturday.

With Adanaspor and Gaziantepsor have already been relegated, there is one last spot in the drop zone that is still undecided.

Although Bursaspor have the point advantage, they will be hosted by Trabzonspor who are among the most on-form teams in the league at the moment.