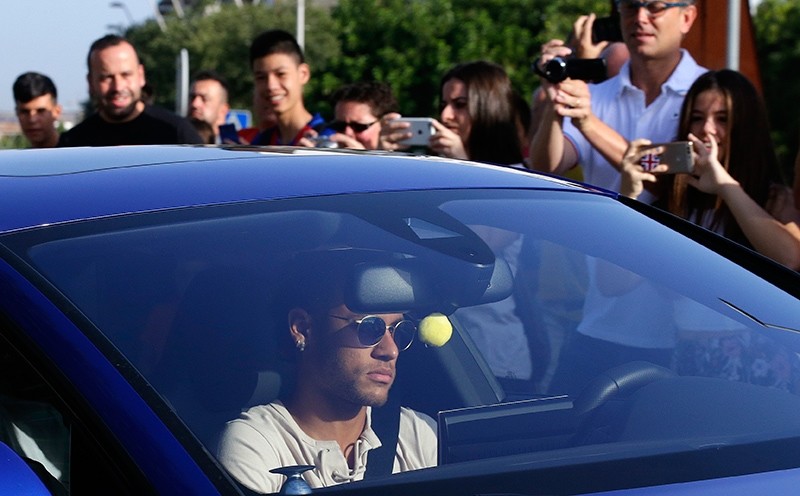 FC Barcelona said Wednesday that Neymar plans to leave the club amid rumors of a blockbuster move to Paris Saint-Germain.

The club said the Brazil striker told his teammates "that he had the intention of leaving the club and seeking his future elsewhere, and the coach has given him permission to leave training."

Barcelona said Neymar did not specify where he wants to play next, but the only club speculated to be after him — and one of few which could handle the cost of the transfer — is the Qatari-owned PSG.

The rumors of Neymar's possible departure started mid-July after reliable Sky Sports Italia journalist Gianluca Di Marzio reported that PSG was ready to pay the Brazilian's release clause of 222 million euros ($262 million). Since then numerous reports concerning Neymar's future, often contradictory to each other, were published.

Barcelona said Neymar left the training ground 30 minutes after arriving on Wednesday. He had arrived to Spain on Tuesday night after holding publicity events for both his personal brand and Barcelona in China.

Presuming both clubs don't come to a late agreement, the buyout clause would have to be paid to Barcelona via Spain's La Liga to free the player from the four-year contract he signed last year.

However, La Liga president Javier Tebas has threatened not to accept PSG's money over what he perceives as a failure on the French side's part to comply with UEFA's financial fair play (FFP) rules. Clubs can be sanctioned by UEFA for making a loss of more than 30 million euros over a three-year period.

"We will not accept this money from a club like PSG," Tebas told the Madrid sports daily AS on Wednesday.

"Especially when this club is infringing rules and laws."

Barcelona have also threatened to report PSG to UEFA over any potential breach of FFP.

PSG have already been fined and saw their Champions League squad limited by UEFA for breaches of FFP in 2014.

Winning the Champions League for a first time is the dream driving PSG owners at Oryx Qatar Sports Investments (QSI) to fund a deal that could herald a new era at the elite level of European football.

Since QSI's takeover in 2011, PSG have failed to make it beyond the quarter-finals, most notably blowing a 4-0 first leg lead to lose 6-1 to a Neymar-inspired Barcelona in the last 16 of last season's competition in March.

With his lightning-quick feet, creative instincts and scoring touch, Neymar helped maintain Barcelona as one of the top clubs in Europe for the past four seasons as he blossomed into a worldwide star.

He teamed up with Lionel Messi and Luis Saurez to make an almost unstoppable attack. Neymar scored 105 goals — some of them true gems — and was a key playmaker for Barcelona as it won a Champions League, two Spanish leagues, three Copa del Reys, one Club World Cup, a UEFA Super Cup and two Spanish Super Cups.