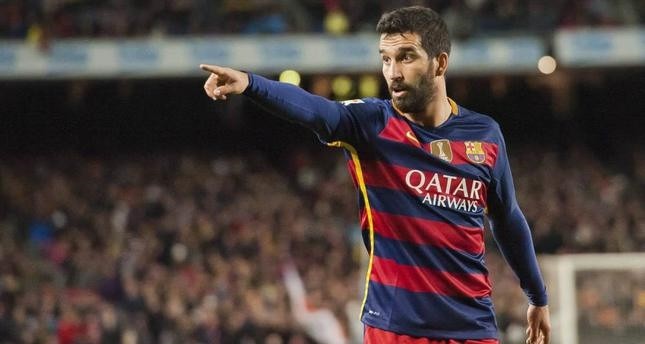 Since joining Barca in 2015, Arda Turan never became a regular starter for the star-studded side. He managed 36 appearances scoring five goals.
by Daily Sabah Aug 17, 2017 12:00 am

Arda Turan's future in Barcelona looks uncertain after the Catalan club's new coach Ernesto Valverde said that he prefers other footballers. The comments however caused excitement among Turan's likely suitors and Galatasaray Chairman Dursun Özbek joined the conversation saying, "Our doors are always open to him"

After an unimpressive spell at Barcelona, Arda Turan's future at the club looks uncertain under the new boss Ernesto Valverde with news of a possible return to his former club Galatasaray dominating headlines in Turkey.

Since joining Barca for 34 million euros in 2015, the Turkish attacking midfielder failed to live up to his name and never became a regular starter for the star-studded side. He managed just 36 appearances scoring only five goals. After the Catalan club's new coach Ernesto Valverde recently made it clear that Turan was not part of his plans, rumors were out that Barcelona were prepared to sell him, and Turan's former clubs Atletico Madrid and Galatasaray, and even Manchester United were suggested as possible destinations. Barcelona coach Ernesto Valverde has kept the door open to a possible transfer request for the midfielder.

"His future at the club will be clear depending on my decision. It depends on his performance. I prefer the other players right now. The club made a big investment for Arda Turan."

Turan was not also part of the Barca team that lost 3-1 to Real Madrid in the first leg of Spain's King Cup. He has also been overlooked for the return leg of the match today. The Spanish sports daily, AS has linked Turan with a move to Manchester United and claimed that the United boss Jose Mourinho has held talks with the footballer "on many occasions."In the meantime, Turkish giants Galatasaray have also made their intentions known to sign up Turan, who came through Galatasaray's youth systems.Speaking about Turan, Galatasaray Chairman Dursun Özbek told the Turkish broadcaster NTV: "I cannot comment about Arda right now. He has a contract with Barcelona. But, I have always kept in touch with Arda. He is our son. If he wants to return home, our doors are open. Who doesn't want a footballer like Arda? He is one of the best footballers Turkey has ever raised. His transfer depends on different conditions. If Barcelona demand 20 million euros and Arda demands 10 million what can we do? We are discussing this issue with our coach Igor Tudor. Maybe we can finalize this transfer with the help of a sponsor."

On Fatih Terim's possible return, Özbek said: "Terim coached the national team. We did not expect him to quit. We have already begun the season with Tudor. There is a team in our hands that Tudor has created. Fatih Terim was also raised by Galatasaray, but now the club has its own system."

Earlier last week, Turan said he was ready to return to his national team duty, two months after announcing his retirement from international football, following a bust-up with former coach Fatih Terim. Turan, Turkey's captain and standout player of the last decade had in June been thrown out of a training camp by Terim following a fracas with a reporter on a plane. But the situation changed after Terim this month stepped down, also in the wake of a brawl, in this case at a Turkish restaurant. He was replaced by veteran Romanian coach Mircea Lucescu who immediately opened talks with Turan in the hope of acquiring his services for Turkey's remaining four World Cup qualifiers."From now on, I want it to be known that I would feel honored to have the national jersey on my back when the coach thinks it appropriate," Turan wrote on his Instagram account accompanied by a picture of the Turkish number 10 shirt.

"I want to be by the side of my teammates in these difficult four games that remain," added the 30-year-old.

He praised the support of Turkish Football Federation (TFF) president Yıldırım Demirören and Lucescu which led him to reconsider his decision.