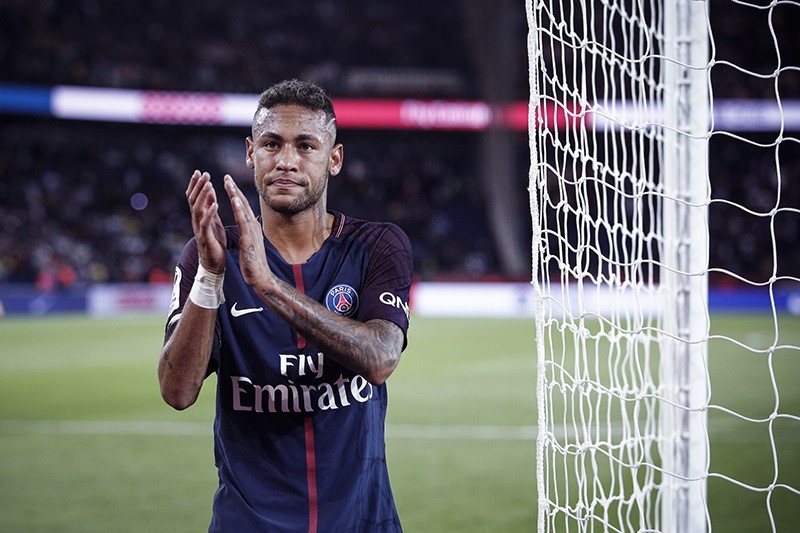 PSG's Neymar applauds with supporters after the French League One soccer match between PSG and Toulouse at the Parc des Princes stadium in Paris, Aug. 20, 2017. (AP Photo)
by French Press Agency - AFP Aug 22, 2017 12:00 am

Barcelona are seeking at least 8.5 million euros ($10 million) from Neymar for breach of contract, the club said on Tuesday following his world record 222-million-euro move to Paris Saint-Germain.

The move comes after Barcelona refused to pay a separate 26 million-euro bonus due to Neymar for signing the renewal to his contract last year.

"In the lawsuit, the club demands the player return the already paid sum for his contract renewal as he has not completed his contract; 8.5 million euros in damages; and an additional 10 percent because of delayed payment," Barcelona said in a statement.

Barcelona, Neymar and his father and agent, Neymar Sr, are embroiled in a dispute over bonuses included in the five-year contract renewal he signed in 2016.

Despite being under contract, Barcelona were powerless to stop his move to PSG earlier this month as the French side met the buyout clause in his contract.

Barca added the demand was lodged against Neymar on August 11 with Barcelona's employment court, eight days after his stunning move to Ligue 1.

Moreover, Barca urged PSG to pay the amount they are seeking if Neymar -- who is reported to earn 30 million euros after tax for the next five years in Paris -- isn't able to meet their demands.

"There are people in charge that shouldn't be there," Neymar told reporters.

"Barca deserve much more and everyone knows that."

"The player hasn't fulfilled his contract with the club...given that breach the club will not pay this renewal bonus," Barcelona spokesman Josep Vives said on August 4.

The case is just the latest in a series of legal disputes that blighted Neymar's four-year spell with Barcelona.

Barca president Josep Maria Bartomeu, former president Sandro Rosell, Neymar and his parents are to face trial for fraud and corruption in Spain over the murky transfer that brought the player from Santos to Barca in 2013.

Investment company DIS -- who owned 40 percent of Neymar's sporting rights at the time of the transfer -- believe they were cheated out of their real share of the deal.

Barca also settled a case with the Spanish tax authorities over the transfer for 5.5 million euros last year.