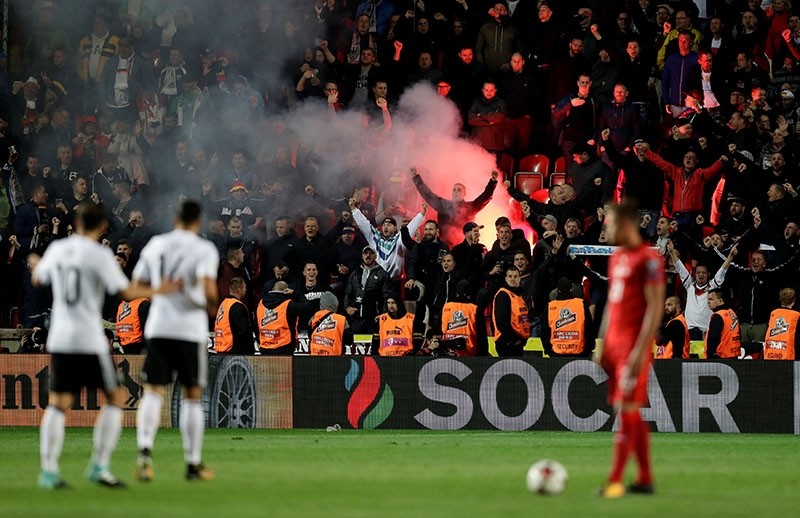 FIFA on Thursday confirmed it had opened a disciplinary case against the German Football Association after fans chanted Nazi slogans during a World Cup qualifying game in the Czech Republic.

The Czech footballing authorities will also be probed over what FIFA described as "several incidents among German fans" during the countries' match on last Friday in Prague. Home teams are responsible for security at their stadium.

German officials have said the fans did not buy tickets through its official process for the match.

Verdicts and sanctions should be decided in late September.

The chants of "Sieg Heil" (Hail Victory) came from a 200-strong group of traveling fan, who also whistled during the minute's silence before kick-off for two deceased Czech officials.

Germany forward Timo Werner, who scored the first goal, was also verbally abused by German fans. The 21-year-old RB Leipzig player is unpopular after diving to win a penalty during a controversial Bundesliga match last season at Schalke.

The chants were particularly embarrassing from a German perspective as they came on the anniversary of the invasion of Poland by Nazi Germany, which started World War II in 1939.

Both the German fans and Coach Joachim Loew slammed the fans over their behavior in statements after the match and refused to go to the away block after the final whistle.

Following the 2-1 win, Germany is likely to qualify automatically for the World Cup in Russia next year.

German fans were also the subject of a UEFA probe in 2012 after bad behavior during Germany's clash with Portugal.