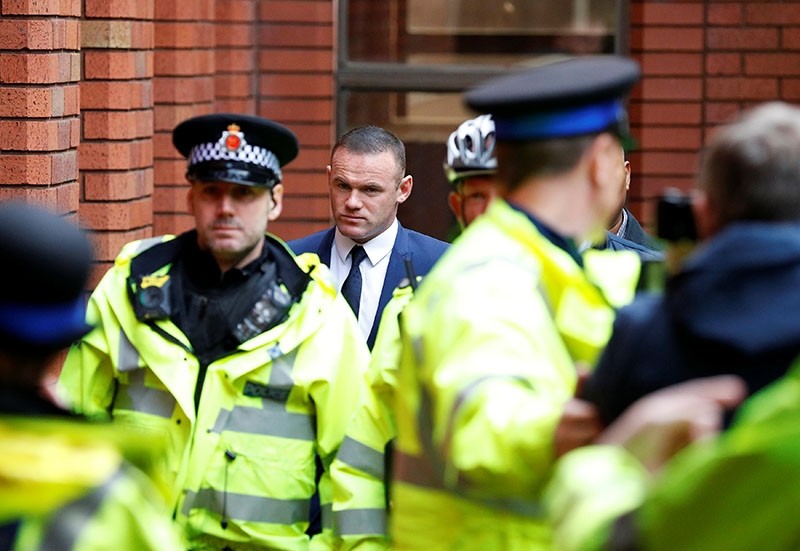 The Everton striker apologized for an "unforgivable lack of judgement" following his sentencing by a court in northern England for being nearly three times over the drink-drive limit while his pregnant wife and their three sons were on holiday.

He was stopped by police when driving a woman's black Volkswagen Beetle at around 2:00 am (0100 GMT) on September 1 and later arrested and bailed.

The drink-drive limit in England and Wales is 35 micrograms per 100 milliliters of breath.

Rooney, 31, was banned from driving for two years and ordered to perform 100 hours of unpaid work as part of a 12-month community order.

His legal team asked the judge to consider not imposing a community order because of his ongoing charitable work but he said he was "not convinced" that imposing a large fine "would have the same effect".

Rooney, who rejoined boyhood club Everton after 13 trophy-laden years at Manchester United in July, tweeted an apology to his 16.4 million followers.

"Following today's court hearing I want publicly to apologize for my unforgivable lack of judgement in driving while over the legal limit. It was completely wrong," Rooney said in a statement.

"I have already said sorry to my family, my manager and chairman and everyone at Everton FC. Now I want to apologize to all the fans and everyone else who has followed and supported me throughout my career.

"Of course I accept the sentence of the court and hope that I can make some amends through my community service."

Earlier, Rooney entered court in a dark blue suit and black tie and sat in the public gallery next to his agent Paul Stretford.

When asked how he pleaded to the charge that he drove under the influence of alcohol while over the prescribed limit, he replied guilty.

Michael Rainford, defending, said Rooney accepted the facts of the prosecution case in full and highlighted his charity work.

"He is not somebody who pays lip service to the charities as so many often do," he said. "This is somebody who is actually hands-on with the work he carries out. It is something that is very close to his heart."

Following the hearing, the footballer left court with his lawyers again followed by a media scrum of TV cameras, press photographers and reporters.

His entourage fought their way through the throng to a waiting people-carrier with tinted windows and Rooney was driven away.

Everton manager Ronald Koeman said earlier this month the matter would be dealt with internally, adding that he was "disappointed" by the drink-driving charge.

Rooney has been married to his high-school sweetheart Coleen since 2008 and they are expecting their fourth child.

He was given a warm welcome at Old Trafford on his return to former club Manchester United on Sunday but it ended in disappointment with a 4-0 defeat for Everton.

His form moved England manager Gareth Southgate to offer him an international recall, but he decided to call time on his England career.

Rooney first burst onto the scene aged just 16 at Everton and went on to score 17 goals in 77 appearances for the "Toffees" before moving to Manchester United, where he won multiple trophies, including the Champions League.