FC Barcelona to join Catalonia strike as board members resign 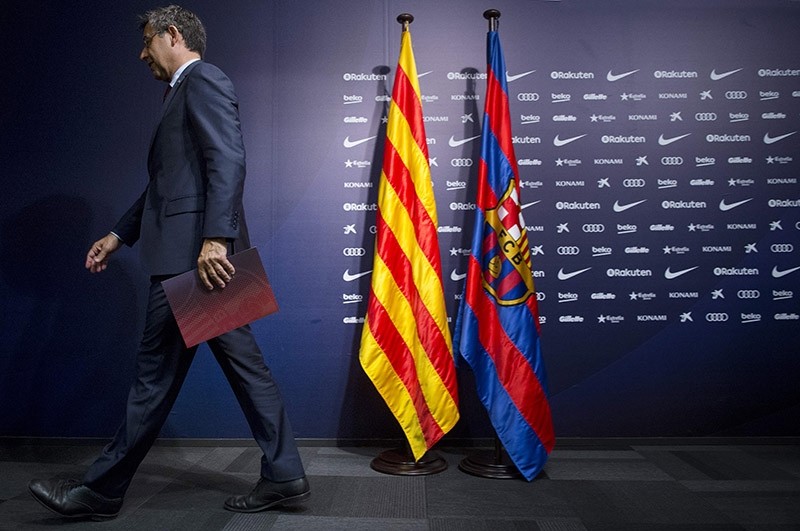 FC Barcelona's president Josep Maria Bartomeu leaves after giving a press conference at the Camp Nou stadium in Barcelona on Oct. 2, 2017. (AFP Photo)
by Compiled from Wire Services Oct 02, 2017 12:00 am

Barcelona is joining a strike to protest against the Spanish government's actions in Catalonia's independence vote. None of its professional teams will practice Tuesday.

Barcelona said on Monday its youth teams also won't train, and the club headquarters will be closed.

"The board of directors has decided to support the call for strike action tomorrow led by Taula per la Democracia. The club shall cease all activities for the whole day and none of the professionals or amateur teams will train."

Barcelona's employees on Monday held a 15-minute strike to condemn the violence used by authorities.

Girona also suspended practice on Tuesday, and Espanyol, the other Catalan club in the Spanish league, will have its players undergo physical activities behind closed doors at its training camp.

Barcelona tried to postpone its home match on Sunday during the referendum but the league denied its request, so it closed Camp Nou to spectators to send a protest message and avoid losing points and being sanctioned. It beat Las Palmas 3-0.

Officials said more than 890 civilians and some 430 members of the police force were injured in clashes as the central government tried to halt the disputed independence referendum that it called unconstitutional.

Club Barcelona, one of the main symbols of Catalonia, has openly backed the region's rights to hold the referendum.

Defender Gerard Pique, one of the most outspoken players defending the Catalans, teared up after the game as he talked about confrontations between voters and police. Authorities used batons and fired rubber bullets to clear protesting voters across the northeastern region.

Bartomeu confirmed that two of the club's board members resigned in the wake of his decision to play a match behind closed doors.

"Today the board of directors has accepted the resignations of vice-president Carles Vilarrubi and the commissioner of the Barca Innovation Hub, Jordi Mones," Bartomeu told a press conference after an extraordinary board meeting.

Vilarrubi and Mones are believed to have been in favor of Barca refusing to play, even if it meant incurring a sporting sanction of forfeiting the match against Las Palmas and being docked a further three points by La Liga.

Barca attempted to have the match postponed, but their request was rejected by La Liga as Catalan police insisted it was safe for the match to go ahead.

"We perfectly understand that many of our members and fans would have preferred the option of calling off the match," added Bartomeu.

A section of Barca fan groups had threatened a peaceful pitch invasion to interrupt the match.

"I decided to play behind closed doors because we believed that the image of a football match being played in a completely empty Camp Nou...would have been a way of showing how we utterly reject the exceptional and inadmissible situation going on in Catalonia."

Espanyol said it will respect its employees' decision on whether to strike, while Girona said the entire club will be closed.

"The club condemns the violent and repressive actions carried out Sunday in Catalonia and shows its support and solidarity with the country's citizens and institutions," Girona said in a statement.