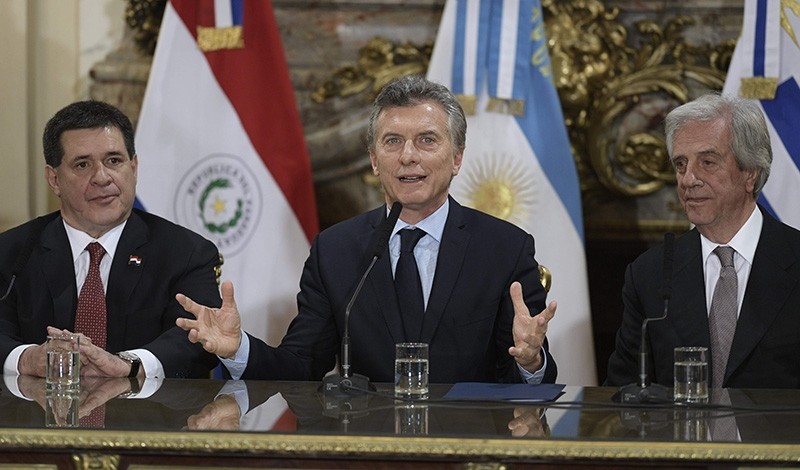 Argentine President Mauricio Macri (C) speaks to press next to his counterparts Horacio Cartes (L) of Paraguay and Tabare Vazquez of Uruguay after holding a meeting at the Casa Rosada presidential palace in Buenos Aires on Oct. 4, 2017. (AFP Photo)
by Associated Press Oct 05, 2017 12:00 am

Argentina, Paraguay and Uruguay will make a joint bid to host soccer's centenary World Cup in 2030, the presidents of the three South American countries said on Wednesday.

Bidding is not due to open for at least another four years, but the South American bid is already expected to face tough competition for the hosting rights of a tournament that will likely feature 48 teams.

European soccer federations will be eligible to bid, with an option that could unite England and other British members of FIFA, while China is also expected to express interest in hosting the tournament.

"If they give us a chance, we're going to be great hosts," Argentine President Mauricio Macri said during the announcement at the presidential palace in Buenos Aires. "We're going to organize a great World Cup because there's plenty of soccer passion in this region of the world."

Macri said the three countries are looking into "six or eight" stadiums in Argentina and "two or three" stadiums in Paraguay and Uruguay.

Uruguay staged the first World Cup in 1930 and had long been expected to seek hosting rights with Argentina.

Uruguayan President Tabare Vazquez said the idea of a joint bid followed a visit by Macri to Montevideo in January 2016.

"The subject came up and, after just over 40 seconds of talking about it, we had agreed on the possibility of an Argentina-Uruguay bid," he said, adding that the possibility of bringing Paraguay into the bid came later. Paraguay President Horacio Cartes announced his support for such a move two months ago.

"We think we deserve it because it marks 100 years from that historic milestone," Vazquez said. But he declined to answer reporters' questions about the costs of hosting the tournament or concerns about the possibility of stadiums becoming so-called white elephants if not managed properly.

A three-way bid from the United States, Canada and Mexico is favored to host the 2026 World Cup. FIFA has said that it will expand the World Cup to 48 teams, adding 16 extra nations to the 2026 tournament.

The announcement of the South American bid was also attended by FIFA President Gianni Infantino.