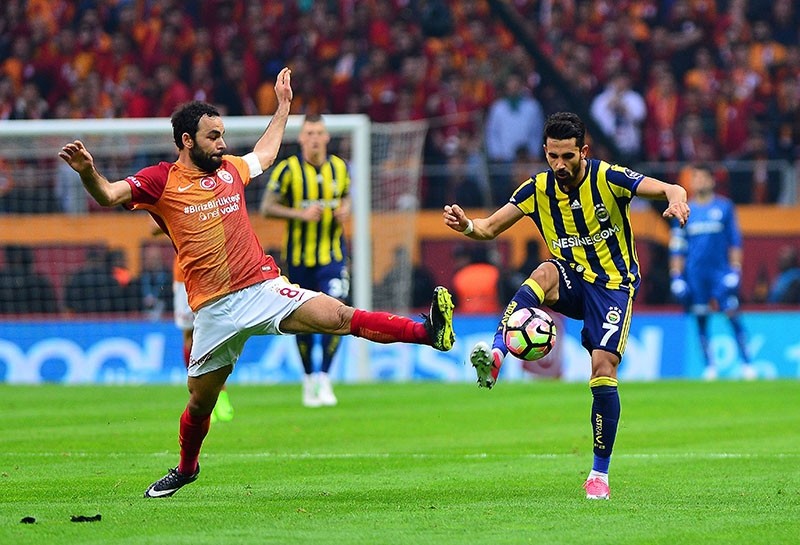 This file photo shows Galatasaray midfielder Selu00e7uk u0130nan (L) and Fenerbahu00e7e midfielder Alper Potuk fighting for the ball during the Super League match at the Tu00fcrk Telekom Stadium in Istanbul, on April 24, 2017. (IHA Photo)
by Daily Sabah Oct 22, 2017 12:00 am

This Sunday, nearly all Turks are making plans for a single event starting at 7.30 p.m. local time, when two of the country's most cheered sports clubs with will play against each other for the 386th football match in a 103 year old rivalry.

Besides the stadium, the European-side Taksim area where the Galatasaray high school is located, and the Asian-side Kadıköy district where Fenerbahçe neighborhood is located, are expected to be filled with thousands of fans coming together to watch the match.

Various side roads on one of Istanbul's main arteries, the TEM highway, will be closed, with service frequency of the M2 subway line increased to accommodate fans flocking to the stadium in the Seyrantepe district.

Across Turkey, millions of fans without subscriptions to the paid network that airs the Super League matches will crowd cafes, bars and coffeehouses.

Having earned 22 points with seven wins in eight matches, the yellow-reds Galatasaray are the favored side. However, football in Bosporus derbies can be unpredictable, rarely reflecting the teams' overall performance, and the yellow-navies Fenerbahçe are seeking an end to their poor start to the season. They currently rank fifth with 14 points obtained in four wins, two draws and two losses.

Prior to the match, Fenerbahçe posted on their official Twitter account that they won 2-0 in the simulation played in FIFA 18, the popular football game released late September.

"The Yellow Canaries" Fenerbahçe have a clear dominance in the derbies against "The Lions" Galatasaray, winning 146 out of a total 385. Galatasaray has picked up 123 wins while 127 games ended in stalemates.

Fenerbahçe clinched a 6-0 victory over Galatasaray, their biggest in derby history, on Nov. 6, 2002, despite a poor performance in the rest of the season in which they finished sixth while Galatasaray were the runners-up. The Yellow Canaries scored four of those goals after they were reduced to 10 men.

Both clubs have long competed for the title of the most successful football club in Turkey, as well as the greatest Turkish sports club overall. Galatasaray has been champions of Super League 20 times, while Fenerbahçe has 19 titles. Galatasaray won the Turkish Cup 17 times and Fenerbahçe won it six times.