Neymar breaks out in tears after coach Tite defends his reputation 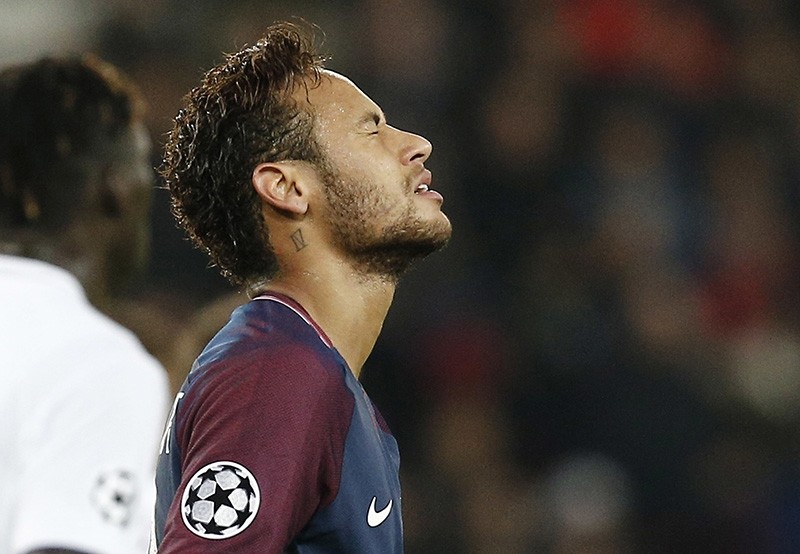 PSG's Neymar reacts after missing a chance on goal during a Champions League Group B soccer match between Paris Saint-Germain and Anderlecht at Parc des Princes stadium in Paris, France, Tuesday, Oct. 31, 2017. (AP Photo)
by Associated Press
Nov 11, 2017 12:00 am

Having scored one penalty and missed another penalty in Brazil's 3-1 win over Japan in Lille on Friday, Neymar then cried at a news conference after his coach defended his reputation.

Brazil coach Tite was moved to defend Neymar following reports this week in the French media that Neymar has fallen out with Paris Saint-Germain coach Unai Emery. Reports in Spain even linked Neymar — who only just joined PSG for a world-record fee of 222 million euros ($260 million) — with a move to Real Madrid.

Speaking after the win against Japan, Neymar insisted he is happy at PSG.

"I had a great welcome at PSG. Everyone treated me with care and respect," he said. "Any move to a new place of work has difficulties, it takes a while, but it also depends on people at the club to make adaptation quicker. That's what happened to me, I adapted quickly."

He also dismissed reports of a fallout with Emery.

"I talked to Tite, this is something that has hurt me little by little," Neymar said. "These stories are made up by people who are not in PSG, who are not there day by day."

Brazil forward Neymar denies he has problems with his team mates at Paris St Germain and breaks out in tears after being given the backing of his national team coach Titehttps://t.co/mSrKtobubc pic.twitter.com/WM7mbtscTY

According to reports, Neymar has been unhappy with Emery's use of video to review matches — considering them too long — and they also had a falling out during a training session. Sports daily L'Equipe reported that Neymar even did the opposite to what Emery asked on one occasion.

Neymar was rested last Saturday as Angers was beaten 5-0, with Emery saying he was being rested because of a minor knock, which further fueled stories of tensions between them.

Neymar continued to dismiss them.

"I don't like made up stories. My trouble is with part of the press. It is not against everyone," Neymar said. "It is against those that think they know it all, but they don't."

In September, Neymar was caught in the middle of a media storm when he argued with PSG teammate Edinson Cavani over who should take a penalty, which Cavani — the club's top scorer this season and last — eventually did.

Emery did not make it clear afterward who is the designated penalty-taker going forward.

"I have no issue with Cavani, no issue with the coach. On the contrary, I came to PSG with his support," Neymar said. "We had a meeting and he said he was going to help me, help me achieve goals with the club and the group. I want this story of me having problems to end."

"People always said I had problems with Neymar. We are sick of hearing that. I can say he has personality and character," Tite said. "We are not perfect, we are human beings. Sometimes we react in the wrong way. I did that in my career. But we have to be careful when we talk about people's character and nature. I can talk about Neymar's character, nature, and big heart."

Earlier, Fernandinho was fouled in the box and Neymar converted the penalty in the ninth minute, sending Japan goalkeeper Eiji Kawashima the wrong way. The referee at Pierre Mauroy Stadium in Lille used video assistance to award the penalty.

Neymar's second penalty attempt was blocked by Kawashima. Hotaru Yamagushi was sanctioned for a clumsy challenge on Gabriel Jesus in the 17th.

Marcelo and Gabriel Jesus also scored for Brazil in the first half. Tomoaki Makino scored for Japan in the second half.

Brazil has embarked on a mini-tour of Europe and will next play England at Wembley Stadium next week.

Brazil and Japan have qualified for the World Cup in Russia.