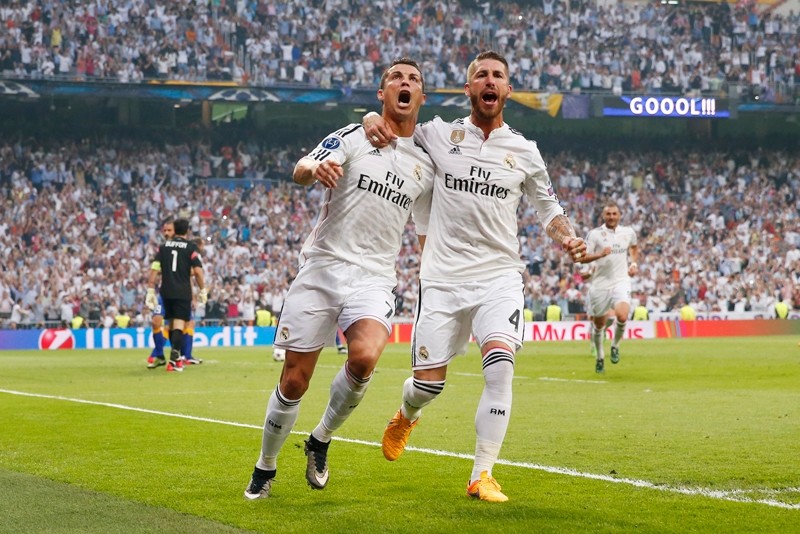 Spain face Portugal in their first group game in Russia with Real Madrid team-mates Sergio Ramos and Cristiano Ronaldo likely to come face to face in a match that will go a long way to deciding the group winners.

"Cristiano for starters," declared the front of Spain's Diario AS on Saturday after the draw for the 2018 World Cup in Russia pitted Spain against Real Madrid's Cristiano Ronaldo in a first game against Portugal.

Ronaldo has been the face of La Liga since he joined Real Madrid in 2009, he is the club's all-time record goalscorer, and he is also currently in a dispute with the Spanish tax authorities, so there will be no shortage of sub-plots when he lines up against club team-mate Sergio Ramos.

Julen Lopetegui's side face Ronaldo and company in their first game in Sochi on June 15. It's not the easiest of starts, but reaction to the draw in general on Saturday was one of overall contentment.

Marca's front page on the day of the draw had declared: "There is no small rival." But the image of three Russian dolls wearing the kits of Brazil, Germany and Argentina illustrated clearly who the Spanish most wanted to avoid.

"I think it's a nice draw," said former Spain coach Javier Clemente. "The stronger candidates to win the tournament are Spain Brazil and Germany."

Portugal, despite being European Champions, are not seen as a threat to Spain's progress beyond the group stage.

Spain are also happy with a potential last-16 meeting with Russia should they win their group and the hosts finish second in theirs.

They drew with Russia 3-3 in their most recent friendly with Ramos scoring twice from the penalty spot. But they will be overwhelming favourites to win that game and progress.

Much of the focus will be on Ramos in the first group game against Portugal as he marks his club team-mate Ronaldo. The two have not always seen eye to eye so far this season.

After a recent Champions League defeat to Tottenham at Wembley Ronaldo complained to reporters that Madrid were missing players that they had allowed leave the club last summer.

Ramos later responded in Spanish media saying: "Everyone has their opinion but the comments appear to me to be a bit opportunist, because when we won the Super Cup earlier in the season we had the same players as now."

The two Real Madrid club captains are strong personalities and their personal duel in Sochi will go a long way to settling who takes the spoils in that first game.

When Spain play Morocco, they could face a player who has already played for them at senior international level, Munir El Haddadi.

The Alaves forward was called up for his Spain debut in 2014 when he was still at Barcelona and he played 13 minutes against Macedonia under Vicente del Bosque.

Morocco are now taking his case to the Court of Arbitration for Sport to see if he can be given the go-ahead to play for the birth country of his father despite those competitive minutes for Spain.

Former Spain coach Del Bosque said: "I think that there needs to be flexibility and he should be allowed to play for them.

"I feel guilty because we called him up because he was with the Under-21 team and we had an injury. I would like him to be able to play for Morocco."

In Spain's other game they face Iran, who did not concede a single goal in qualifying, and there is another strong La Liga link because Iran coach Carlos Quieroz managed Real Madrid in the 2003-04 season.

Spain are likely to be based in Krasnodar for the three games. "Until it's official I cannot say anything, but that's more than probable," Lopetegui said.