Başakşehir deal with Barcelona for Arda Turan in the offing 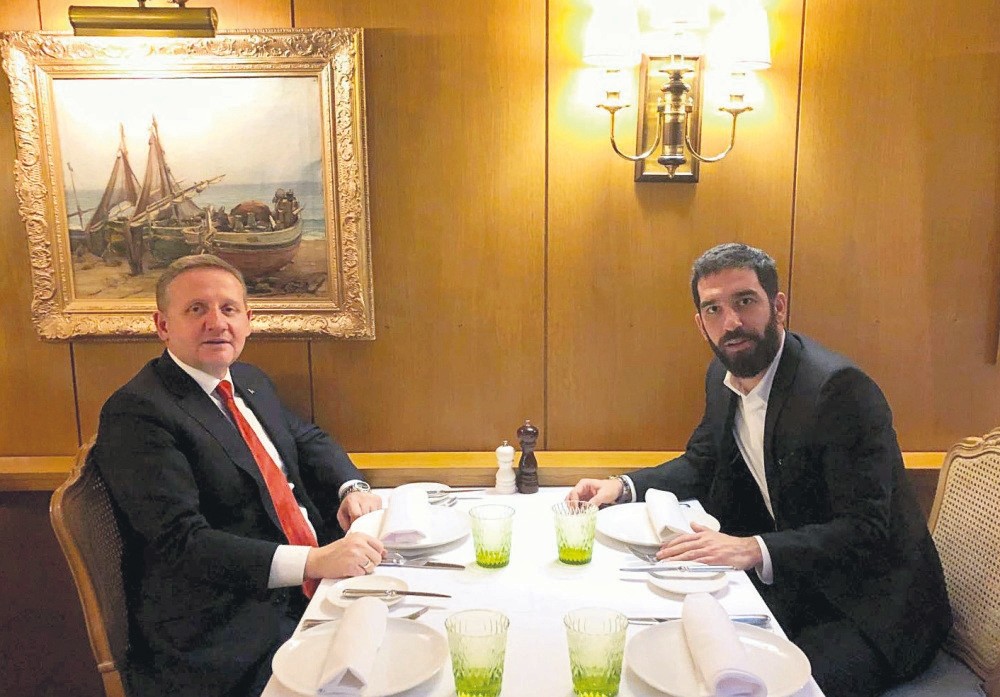 League leader Başakşehir is very close to acquiring from Barcelona on a six-month loan, while Beşiktaş has signed up Canadian striker, Cyle Larin and Galatasaray has set its eye on Celta Vigo's Emre Mor

With the January transfer window open for business, the Turkish Super League teams are gearing up to find the right players in the market. One of the biggest news in the current transfer window came from Medipol Başakşehir, whose Chairman Göksel Gümüşdağ went to Barcelona to negotiate a six-month loan deal for Arda Turan.

Gümüşdağ, after meeting Arda Turan in Barcelona yesterday, said, "Barcelona is leaning towards loaning Arda to us. We have reached an agreement-in-principle on various issues. Our vice chairmen have met with the players' representative and Barcelona officials." "I have also met with Arda Turan to learn his opinion over joining our club. I return to Turkey full of optimism." "He wants to play for our club, Barcelona wants to loan him to us and our two big sponsors were ready to make a big sacrifice because the costs will be high. However, we have to wait until we can complete a number of procedures to finish the move," he said.

"We have agreed in principle and our officials, Turan's representative, and Barcelona officials are in touch. I hope we will get a good result soon." The current table-topper wants to strengthen their squad ahead of the second half of the season with more options to secure the title. Accordingly, the club is said to have made a 5-million-euro offer to the Catalan club for Arda. The amount is likely to be welcomed by Barcelona, who don't want to release the player for free. Its main objective is to avoid paying Turan his salary worth over nine million euros a year while reducing a due payment since his capture three seasons ago for 34 million euros.

Following Beşiktaş striker Cenk Tosun left for Everton, another one of their footballers, Oğuzhan Özyakup, has appeared on the radars of a number of European powerhouses. The 25-year-old midfielder spent four years at Arsenal as a youngster, before joining Beşiktaş in 2012 for around 500,000 euros. Özyakup's contract will end at the end of the season and Beşiktaş is yet to offer him a new contract. According to Turkish sports broadcaster, NTV Spor, two clubs were interested in Özyakup, one of which was Italian powerhouse AC Milan. Reports claimed that Beşiktaş has asked at least 10 million euros for the player. If the two clubs reach a deal, Özyakup will wear a Milan jersey as of the second half of the season.

Beşiktaş has also reached an agreement for the transfer of Cyle Larin from Canadian club Orlando City SC. Larin had said he wants to play in Europe next year, and Orlando general manager Niki Budalic recently stated that the club would support those overseas ambitions and accept an offer that makes sense for them. Since being picked first overall in the 2015 MLS SuperDraft, Larin has been one of the league's most prolific scorers, netting 17 goals as a rookie followed by a 14-goal campaign in 2016 and a 12-goal season in 2017.

Meanwhile, Turkish powerhouse Galatasaray is looking to make a move for Celta Vigo's Emre Mor. The Lions want to loan Mor, who is a Danish citizen but represents Turkey at international level, for the second half of the season. Earlier last week, English Premier League club Everton transferred to the Turkish marksman Cenk Tosun from Beşiktaş. Tosun inked a 4.5-year deal that will keep him at the Goodison Park until the end of June 2022. His transfer cost the Toffees 27 million pounds, making him the most expensive Super League export in history.