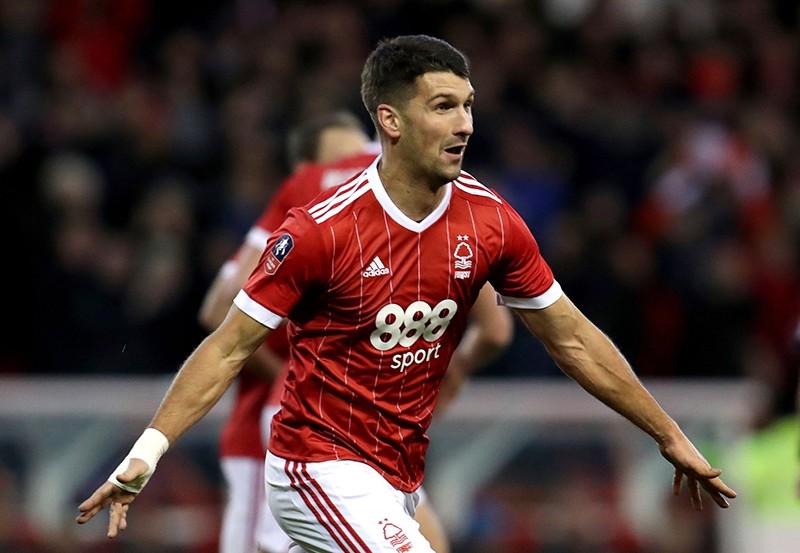 Nottingham Forest's Eric Lichaj celebrates scoring his side's first goal of the game during the English FA Cup, Third Round soccer match between Nottingham Forest and Arsenal at the City Ground, Nottingham, England, Jan. 7, 2018. (PA via AP)
by Jan 10, 2018 12:00 am

Nottingham Forest defender Eric Lichaj has been rewarded for his goal-scoring exploits in the FA Cup win over Arsenal with a pet dog.

The 29-year-old American scored twice as the second-tier Championship side won 4-2 at the City Ground on Sunday to eliminate the holders, and said after the game his wife had promised him a dog if he scored a hat-trick this season.

She was then hounded on social media to get the dog despite Lichaj falling one goal short, and has allowed her husband to have a French bulldog.

The animal has, appropriately, been christened 'Gunner,' in reference to Arsenal's nickname.

"Wanted to show everyone the newest member of the Lichaj family.... Gunner. Thank you everyone for for pushing @KatPerko in the right direction! #erichasadog," tweeted Lichaj on Wednesday.

Wanted to show everyone the newest member of the Lichaj family.... Gunner. Thank you everyone for for pushing @KatPerko in the right direction! #erichasadog pic.twitter.com/SoTKiYiVMR

He tweeted on Monday, asking "anyone who is bored" to send "dog pics, memes, gifs" to @KatPerko — his wife's Twitter handle — and plenty of users joined in using the hashtag #GetEricADog.

Teammates also got involved, with Kieran Dowell, who scored the penalty for Forest's fourth when Lichaj was keen to take it, posting a GIF of a beagle flying on a magic carpet.

Various other teammates waded in, with Ben Brereton, Zach Clough and Matty Cash among those to post dog-related videos on Monday.