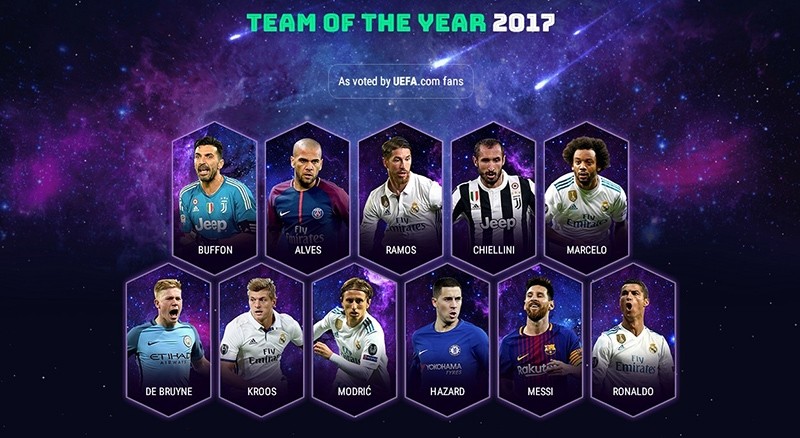 UEFA announced Thursday a team of 11 players deemed by fans as the best performers of 2017.

Juventus legend Gianluigi Buffon was selected as the team's goalkeeper, with his teammate Giorgio Chiellini in the center-back spot.

Real Madrid's Sergio Ramos was chosen as the second center-back, along with his left-back teammate Marcelo.

PSG's Dani Alves was selected by the fans for the right-back spot.

As in previous years, Cristiano Ronaldo and Lionel Messi grabbed the two forward spots to round out the fantasy team.

Interestingly, Ronaldo was the only player to make it to the team from the top 10 most expensive players of all time.

PSG star Neymar — who joined the French giants this summer for a startling 222 million euros ($267 million) and became the world's most expensive player ever — was missing from UEFA Fans' Team of the Year yet again.

The country that cast the most votes for the team was India, with around 8 percent of the total votes, followed by Poland and Turkey with around 5 percent each.