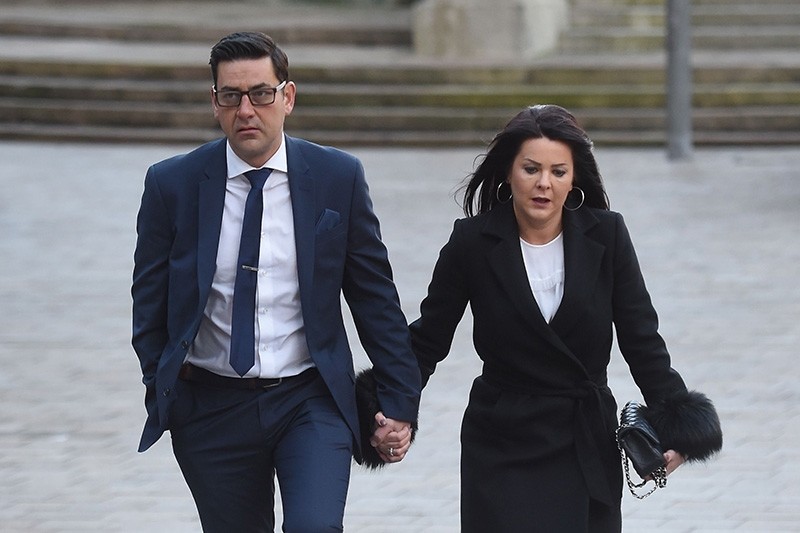 Former footballer and victim of abuse Andy Woodward (L) arrives at court with his partner Zelda in Liverpool on January 8, 2018 on the first day of the trial of former football coach Barry Bennell. (AFP Photo)
by French Press Agency - AFP
Jan 11, 2018 12:00 am

Chris Unsworth, 45, said Bennell, 64, preyed on him after scouting him for Manchester City as a junior and the abuse began "straight away" after the defendant started driving him to the club's training ground.

Unsworth, who has waived his right to anonymity, appeared in the witness box at Liverpool Crown Court in the northwest English city.

The second of 11 complainants who will enter the witness box during the trial, he said the abuse started in the car with a game devised by Bennell called "follow me."

"He would move his hands around your body on the outside of your clothes, tickle you, and you would have to do the same to him," Unsworth told the court.

But, he said, the game would keep going until his hands were "inside your shirt or inside your underpants."

The "follow me" scenario would lead to the initiation of sexual activity and Bennell would allegedly often end up in bed in between two boys, according to Unsworth.

"You would always do what he said. You were hoping he would not ask you," he said.

Unsworth alleged that sexual activity escalated and eventually led to Bennell raping him "about half a dozen times."

"The first time I will never forget it," he said. "I was just crying, the pain. It felt like it went on for hours but it was probably two or three minutes."

Unsworth said sexual contact with Bennell diminished as he hit puberty and ended when he quit football, because he had "had enough."

Bennell, who is appearing in court via video-link due to illness, is being tried on 48 counts of historical child sex abuse between 1979 and 1990. He denies the charges.

Jurors have heard Bennell is a convicted sex offender who has served prison sentences.

He has pleaded guilty to seven counts of indecent assault related to his current trial.

The court was read a transcript of a police interview with Bennell conducted in February 2017.

Bennell denied abusing Unsworth but admitted that he had stayed at his house and slept in his bed.

He said the youth footballer would have been too young for him to be attracted to when they first met.

Bennell also claimed he had been abusing another boy at the time he knew Unsworth.

The trial, which opened on Monday, is expected to last eight weeks.