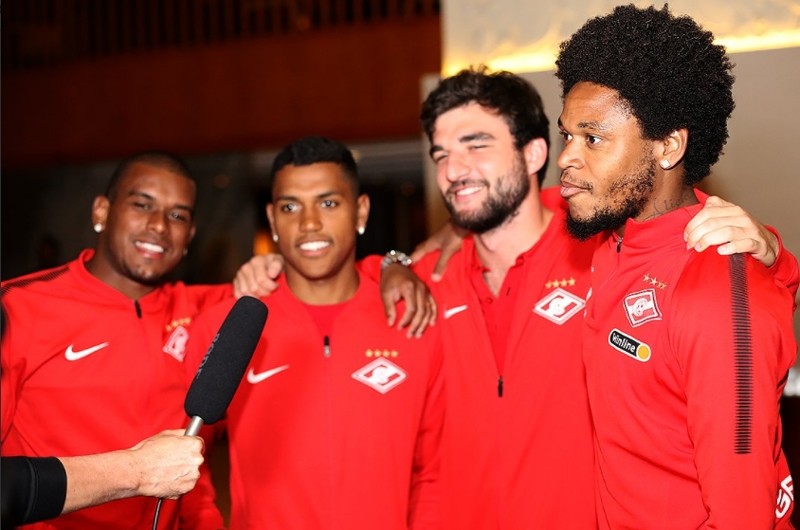 Russian champions Spartak Moscow, already sanctioned by UEFA this season for racist behavior, sparked further condemnation on Saturday after a club tweet that likened its black players to "chocolates".

Spartak tweeted a video of Brazilian players Fernando, Luiz Adriano and Pedro Rocha training in sunny conditions at a team camp in Dubai alongside a caption translated to "see how chocolates melt in the sun".

The tweet was published around 0900 GMT and retweeted over 1,400 times, triggering a wave of criticism before it was deleted almost five hours later.

The same phrase is heard during the video, apparently spoken by Spartak and Russia defender Georgy Dzhikiya. Spartak earlier said Dzhikiya would take control of its Twitter feed for the day.

Several hours after the initial tweet, Spartak published another post with midfielder Fernando, speaking in Russian, saying that there was "no racism at Spartak, we are friends and a family."

The original post was then deleted, before the club uploaded a third video with Dzhikiya and the three Brazilians in a group hug.

"We're all one big family," Dzhikiya said, before Luiz Adriano added: "This is my friend, my brother ... a legend of Spartak. I love you, my friend."

UK anti-discriminatory body Kick It Out slammed the Russian club's conduct while voicing their concerns with just five months to go before the start of the World Cup.

"This social media post from the official account of Spartak Moscow only continues to highlight the prejudices towards black people in Russia," the organisation said.

"With the World Cup only a few months away, it is a reminder that Russia -- as with the whole of football -- has significant work to do to eradicate racism of all forms from the game."

It is not the first time Spartak have been censured over racist behavior this season.

Leonid Mironov, the 19-year-old captain of the Spartak side, was charged with racist behaviour last month during a UEFA Youth League game against Liverpool.

Liverpool lodged a similar complaint against Spartak after Rhian Brewster's team-mate Bobby Adekanye was racially abused by the Russian club's fans during the reverse fixture in September.

Spartak were found guilty in that instance and were made to partially close their academy ground for one match.

Brazilian striker Hulk said in July 2015 that he encountered racism in "almost every game" while playing for Zenit St Petersburg.

But Russia has vowed to ensure fans' safety when it hosts the 2018 World Cup by cracking down on both hooliganism and racism.