Drogba looks to future as stellar career winds down 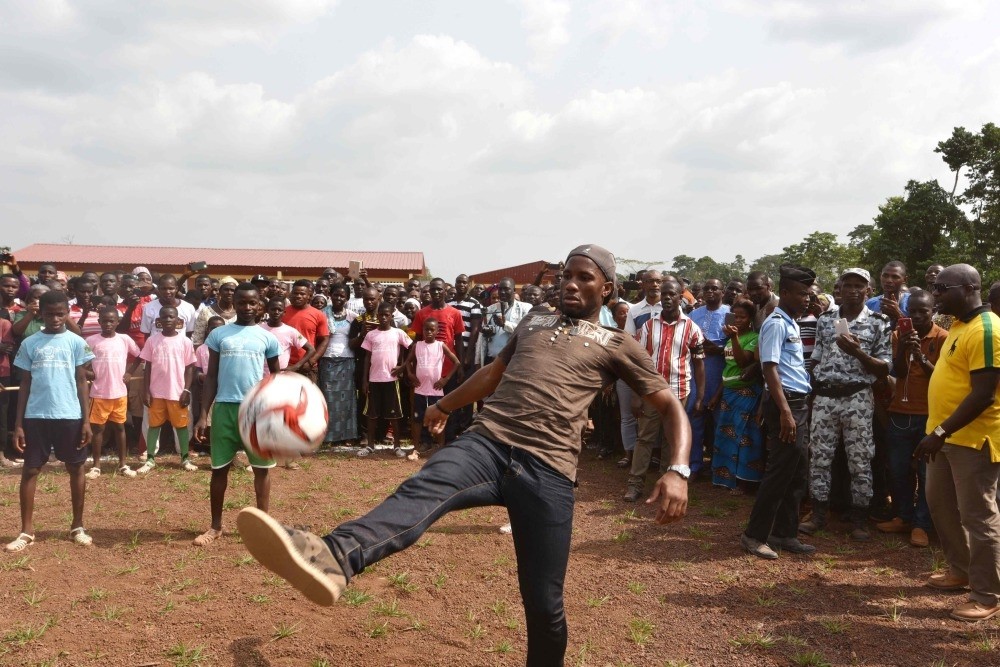 Ivory Coast's football star Didier Drogba plays with a ball on the football ground of the Primary School Didier Drogba during its inauguration on Friday in Pokou-Kouamekro, near Gagnoa, central-western Ivory Coast.
by Jan 20, 2018 12:00 am

Former Galatasaray star Didier Drogba is now dedicating himself to education. As he launches a school project for Ivory Coast's disadvantaged young, he is also fiery about the underperforming state of the national football team

At 39, Didier Drogba is in the twilight years of a glittering football career that has spanned two decades and six countries and brought him a harvest of trophies. Such moments are typically occasions of nostalgia, even sadness, for many ageing football greats. But, in an interview with Agence France-Presse (AFP), Drogba showed he was brimming with passion - launching a school project for Ivory Coast's disadvantaged young and fiery about the underperforming state of the national football team.

"I say to young people who want to become Didier Drogba, Samuel Eto'o, Yaya Toure ... education is very important, it's this which is going to allow you to have a good career," he said, referring to the country's trio of football heroes.

"The best way to have an impact on the future of people is to educate them. Thanks to education, we avoid a lot of socio-ethnic problems. We learn tolerance and that avoids war," Drogba said. Drogba's seven-year-old charity is inaugurating a new school for 350 children in Guiberoua, a region of southwestern Ivory Coast whose economy is dominated by the cocoa trade. As the world's largest cocoa producer, Ivory Coast has struggled to prevent children working in the sector, with somewhere between 300,000 and a million children doing cocoa-related work, chocolate industry figures show. These children grow up using machetes to open beans for sale and most receive little, if any, education. The new school, which will be located in Pokou-Kouamekro village, will have six classrooms, a canteen, three homes for teachers and, of course, a football pitch.

"The Pokou-Kouamekro community, which has more than 4,000 people, until now had a small non-official school made of wood, with three classrooms for all the children," according to the International Cocoa Initiative (ICI), which teamed up with the Didier Drogba Foundation and food giant Nestle to build the new school. Drogba's storied career has taken him to France, England, China, Turkey, Canada and the United States. He is best remembered for his spell at Chelsea, helping them to four Premier League titles, four FA Cups and the 2012 Champions League, which he famously won through an 88th-minute equalizer and the winning penalty in the deciding shootout against Bayern Munich. He was twice named African Footballer of the Year.

Last year, as both player and co-owner, he joined Phoenix Rising, an Arizona club in the second tier of the American league system, which has hopes for joining Major League Soccer (MLS), the North American elite.

Drogba's big disappointment is Ivory Coast's national team, which he captained to runners-up in the African Cup of Nations in 2006 and 2012 and helped it qualify for the World Cup in 2006, 2010 and 2014. Drogba says he has no ambitions of going into politics like fellow African football star-turned-president, George Weah, Liberia's newly elected leader.