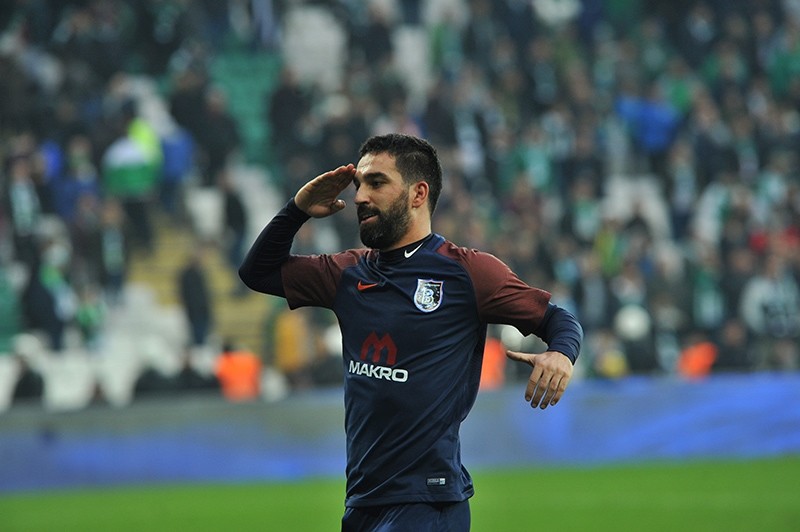 Medipol Bau015faku015fehir midfielder Arda Turan celebrates his first goal for the club during his team's fixture against Bursaspor at Timsah Arena in Bursa, Turkey, Jan. 21, 2018. (AA Photo)
by Daily Sabah Jan 21, 2018 12:00 am

Arda Turan made a scoring return to the Super League with a second-half strike that carried Medipol Başakşehir to a comfortable 3-0 win over Bursaspor Sunday.

Turan, on loan from Barcelona, has returned to the Turkish topflight after almost seven years. His last Super League match was for Galatasaray against Konyaspor on May 20, 2011, which was also the last time he scored in a Super League match.

It was a near-perfect start for Turan, who came on in the 65th minute before scoring a stunner from outside the box in the 86th minute.

He celebrated the goal by giving a military salute to an apparent support for the Turkish military's Operation Olive Branch, launched against terrorist groups in northern Syria's Afrin. He later tweeted "May God help our soldiers who are fighting in Afrin."

Başakşehir were already two ahead, thanks to the goals scored by Joseph Attamah and Marcio Mossoro.

With the 3-0 win, Başakşehir remained top in Super League with 39 points.

At the end of the match, Başakşehir coach Abdullah Avcı said, "Arda Turan will contribute to our team with his great talent."

The 30-year-old joined Başakşehir on loan from Barcelona during the January transfer window.

The Black Eagles won 2-1 to take their points tally to 33. The win keeps them in contention for the title in a week when both Başakşehir and Fenerbahçe won their respective matches.

In other matches on Sunday, Trabzonspor dropped two very precious points after drawing 2-2 with Konyaspor.

The match between Demir Grup Sivasspor and Teleset Mobilya Akhisarspor also ended in a 1-1 stalemate.

The Turkish Super League burst back into life on Friday night as Kasımpaşa beat Aytemiz Alanyaspor 3-2 at the Recep Tayyip Erdoğan Stadium.

On Saturday, the second half of the season in Turkey's top-tier football division was well underway with Fenerbahçe beating Göztepe 2-1 at Ülker Stadium in Istanbul.

On the same day, Kardemir Karabükspor lost 2-0 against Gençlerbirliği on its own turf while Osmanlıspor and Evkur Yeni Malatyaspor drew 0-0 in Ankara.