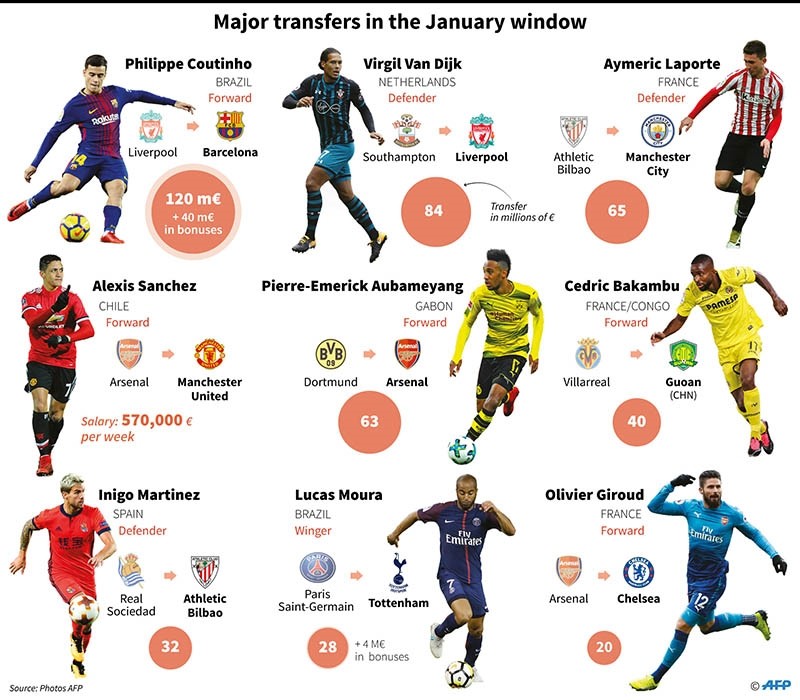 The January transfer window slammed shut Wednesday after a frantic month of activity during which Barcelona completed the biggest deal by signing Philippe Coutinho from Liverpool and Premier League clubs spent heavily across the board.

It was a hectic month for Turkish Super League sides too. Super League title contender Galatasaray signed up Inter left-back Yuto Nagatomo on a loan deal, with an option to buy the player. Nagatomo will be the second Japanese football player at the Istanbul club after Junichi Inamoto, who played during the 2006-2007 season.

Nagatomo, 31, joined Inter Milan back in 2011. This season he made 11 appearances in the Serie A for Inter.

Galatasaray sold midfielder Badou Ndiaye to Stoke City for 16 million euros. The 27-year-old Senegal international has signed a four-and-a-half-year deal with the Premier League side.

"The Premier League is a league that everybody wants to play in, so I am proud to be here, but I know that I have to continue to improve and do everything I can to help Stoke City," he said.

Meanwhile, Antalyaspor parted ways with its start players Samir Nasri and Samuel Eto'o. Antalyaspor ended Nasri's contract after the midfielder scored only two goals and secured one assist in his eight Super League appearances this season. Samuel Eto'o, on the other hand, joined Atiker Konyaspor.

Konyaspor also added striker Adis Jahovic to their roster on a three-and-a-half year contract. The 30-year-old has scored 14 goals so far this season for Super League newcomers Göztepe.

Champion Beşiktaş, on the other hand, bolstered their squad with two strikers, Vagner Love and Cyle Larin, in the January transfer window after marksman Cenk Tosun left for Everton. 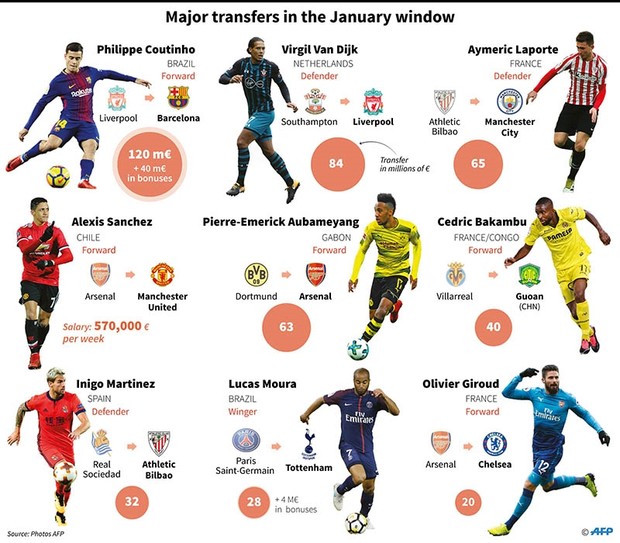 As for Europe's major clubs, the Premier League clubs' purchasing power was evident again in January but unusually the big money went on defenders.

Early in the window, Liverpool made Virgil van Dijk the world's most expensive defender by splashing out a world record 75 million pounds to sign the Dutchman from Southampton.

Liverpool badly needed more quality in their back line but the improvement in the squad was undermined by the departure of Brazil attacking midfielder Philippe Coutinho to Barcelona for a transfer fee reported at about 142 million pounds.

Manchester City manager Pep Guardiola has also not been afraid to spend big on defenders, his signing of French center-half Aymeric Laporte from Athletic Bilbao for a club record fee of 57 million pounds means it has spent more than 200 million pounds on defenders and a keeper since the end of last season.

City lost out on some attacking talent, though, with Chile forward Alexis Sanchez, long linked with a move to The Etihad, opting instead to join rivals Manchester United with Armenia midfielder Henrikh Mkhitaryan moving the opposite way.

While Arsenal fans were disappointed to see Sanchez go, the London club splashed out a club-record transfer fee to sign Gabon striker Pierre-Emerick Aubameyang for a reported 65 million pounds from Borussia Dortmund.

It also got a pleasant surprise when Germany midfielder Mesut Özil signed a new contract until 2021, though their France striker Olivier Giroud was shipped out to rivals Chelsea.

Barcelona will feel the most pleased of all the Liga sides with their January transfer business after capturing coveted playmaker Philippe Coutinho for a club record 142 million pounds and signing Colombia defender Yerry Mina.

Champion Real Madrid has strangely not boosted their squad to help their crumbling campaign, with coach Zinedine Zidane saying he did not want new signings despite his side sitting in fourth place an embarrassing 19 points adrift of Barca.

Bilbao made their most expensive sale ever with French defender Aymeric Laporte moving to Manchester City for 65 million euros and then swiped Inigo Martinez from local rivals Real Sociedad for 32 million euros.